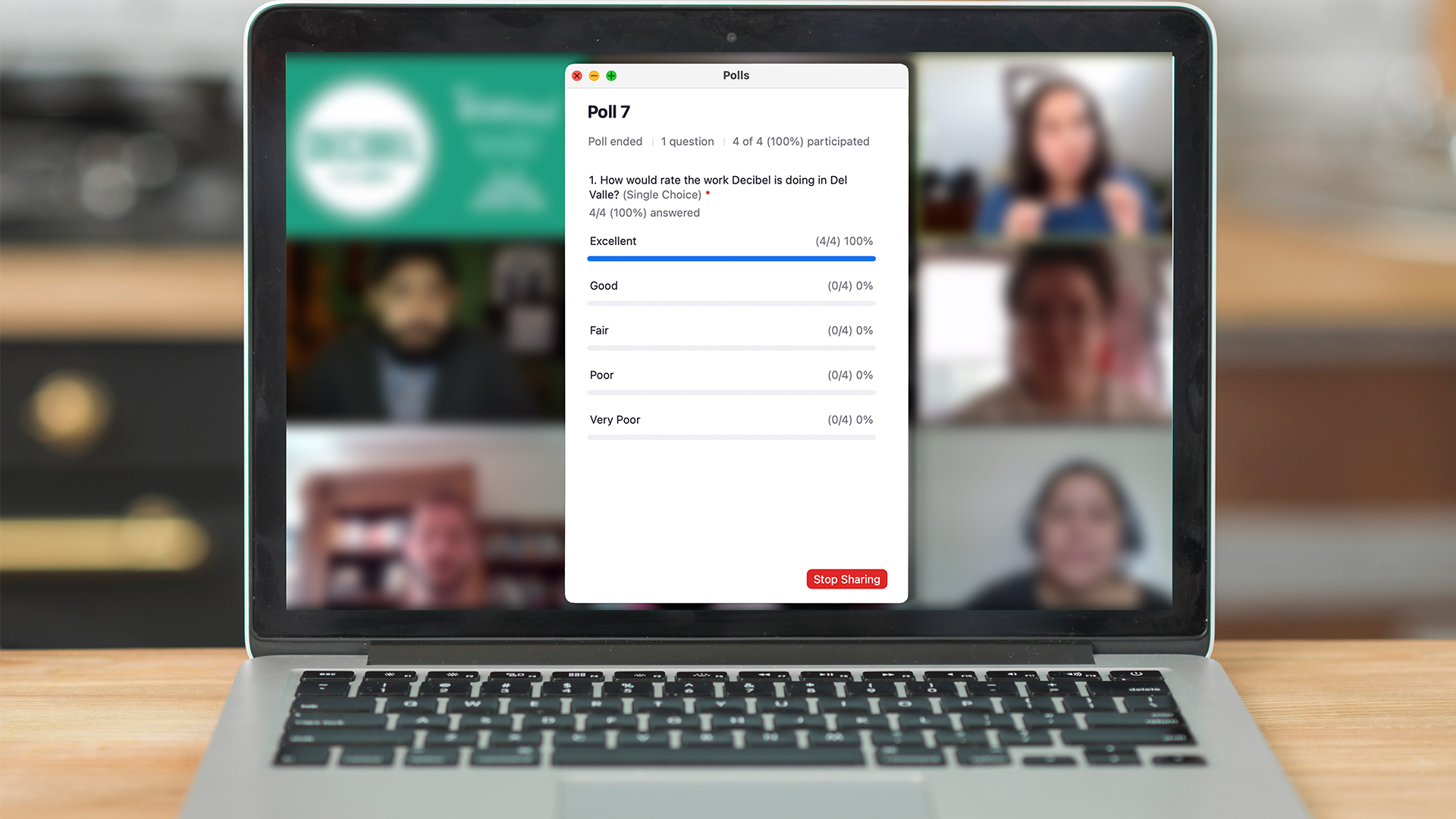 Holding true to Decibel’s commitment to community journalism, our team hosted a third listening event for the Del Valle community on September 15. Due to Stage 5 Covid-19 restrictions in Austin, we reluctantly felt it was safest to go back to hosting virtual listening sessions via Zoom. This virtual event marks seven months of Decibel’s ongoing coverage of the Del Valle area.

After welcoming our attendees to the session, we screened three recently published Decibel pieces: The Calling, Defining Del Valle and The Joyful Child. Immediately following the screening of each piece, we polled our audience to determine two things: how they rated the overall storytelling and how they defined the impact each story had on themselves. One attendee arrived late and missed these polls so their response was not recorded.

All three stories received identical positive results on the overall storytelling rating. Three out of the four attendees rated our storytelling as “excellent” and one rated the stories “good.” In terms of the impact each story had on the viewer, the results held much more variation.

Polls results from listening session. Particpants were asked to rate the overall storytelling of each story showed during the event.

“The Calling” documents how Cottonwood Baptist Church collaborates with Cook’s Nook, a nonprofit organization, to provide healthy food to the community. In response to viewing the story, three-quarters of the attendants said that it inspired them to be more involved in the community. One participant said that they learned something new by watching our story. We asked the attendants to elaborate on their choices and none felt inclined to share their thoughts.

“Defining Del Valle” is a piece of explanatory journalism which lays out the complicated jigsaw puzzle of jurisdictions which make up the community of Del Valle. In response to listening to this story, three-quarters of the attendants said that they felt a part of their identity was portrayed in an authentic way. Again, one participant said they learned something new from hearing this story. The conversation that followed this poll question was much more robust than after the first story. One participant said, “In these unincorporated areas, it makes it really tough to figure out what you can and can’t get access to, so I think stories like this are really helpful.” The other listening session attendants from Del Valle agreed with this sentiment.

“The Joyful Child” is a documentary short that highlights one day care in the Del Valle area, which is considered a childcare desert. In response to viewing this story, half of the participants we polled said that they learned something new about their community. Between the remaining two attendees, one participant said that viewing the story inspired them to be more involved in the community, while the other said they were not impacted in any way by the story.

Polls results from listening session. Particpants were asked to describe the impact of each story.

The discussion following the viewing of this story was short but provided strong feedback for our team. One participant gave us constructive criticism and said, “I think it would’ve been nice to hear from different perspectives on the search for child care and the different workarounds that people have had to go through.” Another attendee expressed gratitude for our team’s coverage of the issue of finding child care in the Del Valle area. The same participant mentioned that issues like this are difficult to understand for people who don’t live in Del Valle. “I think that if this stuff doesn’t exist then there is no way to know because if you’re outside of it. It’s almost hard to believe,” the participant said.

Our final poll asked what the attendees thought of our work in general based off of the stories we shared. All four of the participants gave Decibel an excellent rating for our coverage of the Del Valle community. We then pivoted into a general discussion to gather more insight on what stories to focus on next. We began by asking participants what was the biggest concern they had in their community.

One attendee said their concern was the overcrowding and congestion that happens on the roads during pick-up and drop-off times at the schools in Del Valle. This participant also spoke about the danger that comes with driving around on the roads in the area. “There just needs to be more stop lights in general,” the participant said.

This same attendee also mentioned two big concerns they had. One was how the lighting on the roads in Del Valle needs to be improved for the safety of the community. The second concern was that the police response time in the area can take hours.

A few attendees expressed the need for a directory which would indicate to residents exactly what benefits they are entitled from the local government depending on where they live in Del Valle. A participant suggested that the Decibel team look into covering a peer-to-peer program that is run by the students of Del Valle High School. The participant spoke about how this group worked on a campaign to encourage youth voting in the community during the 2020 election. Another attendee suggested that our team explore the impact encroaching development is having on the local neighborhoods in Del Valle.

Towards the end of our listening session, we asked our attendees how we could increase turnout in our future listening sessions. We learned that incentivizing participation through gift cards to Dollar General, Sonic Drive-In and Chick-fil-a, which are some of the few businesses in Del Valle, could potentially be effective ways to get community members to show up. One participant suggested that we reach out to Sonic Drive-In to see if they would be willing to help us hold an in-person event. Also, since the temperatures are starting to get cooler and to ensure some safety from Covid-19, participants suggested we host our next listening session at an outdoor location like one of the parks in the Del Valle area.

Based on the polling results, it appears that the Del Valle community thinks our coverage is resonating with residents. While turnout was low and therefore we can’t say these results reflect the general feeling of all Del Valle residents, our approach of listening first, then reporting is working. There are still avenues in the community that we are looking forward to shining a light on but our participants told us we are on the right track.

We are planning on holding another listening session in November, and will be using the feedback we got from this listening session to inform what that looks like. If you have tips for how we can improve our events, story ideas or want to share some information about the Del Valle community, please email us at news@klru.org. 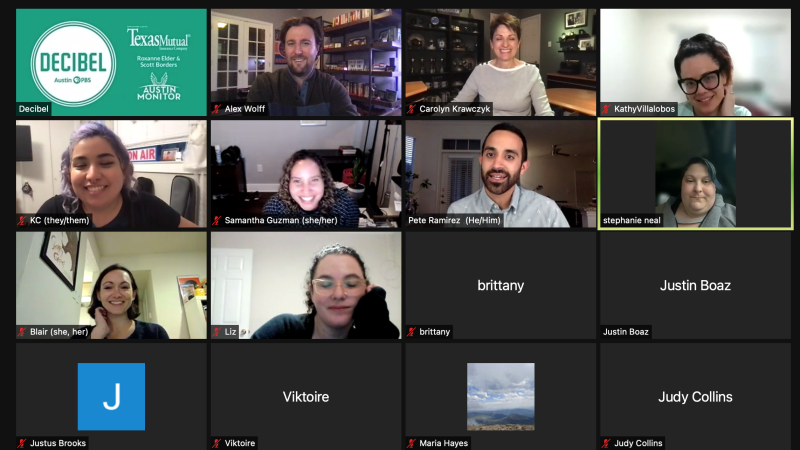 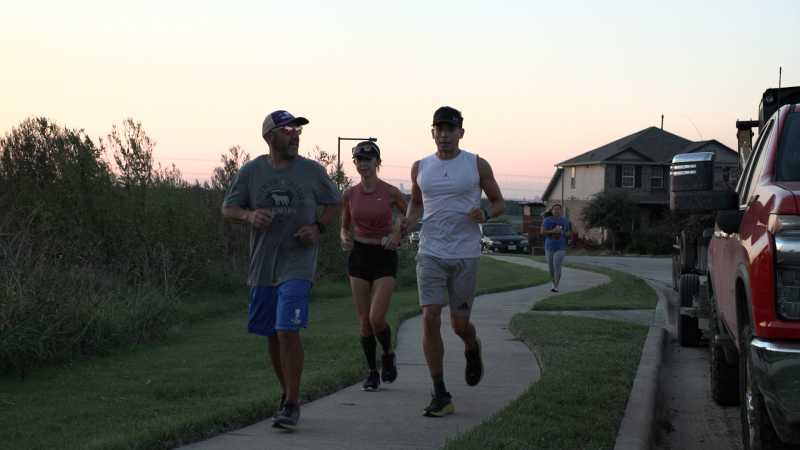 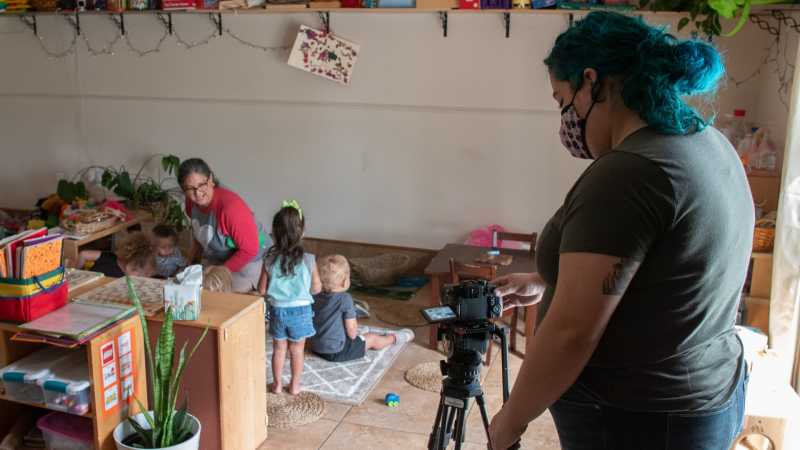 An Update On Our Mission And Values