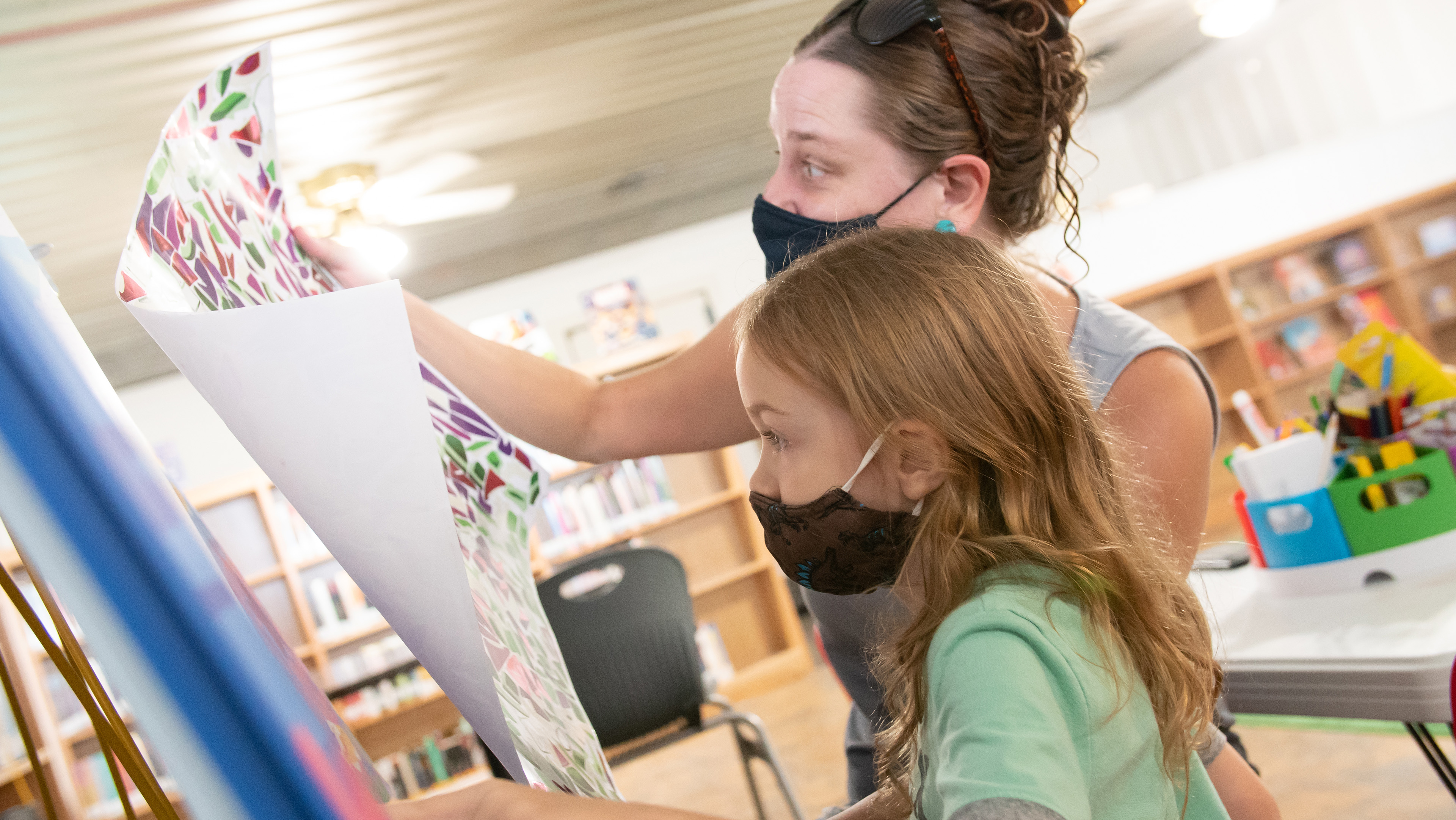 Rosie Angel and her daughters Itzel and Emely arrive at a small white building off of Highway 71 in Del Valle. On first glance, the structure still resembles the cafe it once was, sporting faded Coca-Cola signs and a wide wraparound porch. While fish is on the menu, it’s for feeding the imagination. Angel and her kids find a good spot in the children’s section to hear a reading of “The Rainbow Fish,” which is part of the Garfield Library’s ‘Tails and Tales’ Story Time.

“The girls love it,” Angel says. “They have all the toys and books, and the coloring. They wanted to stay longer.”

Hosted twice a week at the two East Travis Gateway Library District locations, the cornerstone of the event is the weekly story, but there’s also snacks, crafts and games for families to enjoy. It’s a boon to families in the Del Valle community. Not only because it’s educational and free to everyone, but because it’s also one of the only places in the area offering children’s programming during the summer. 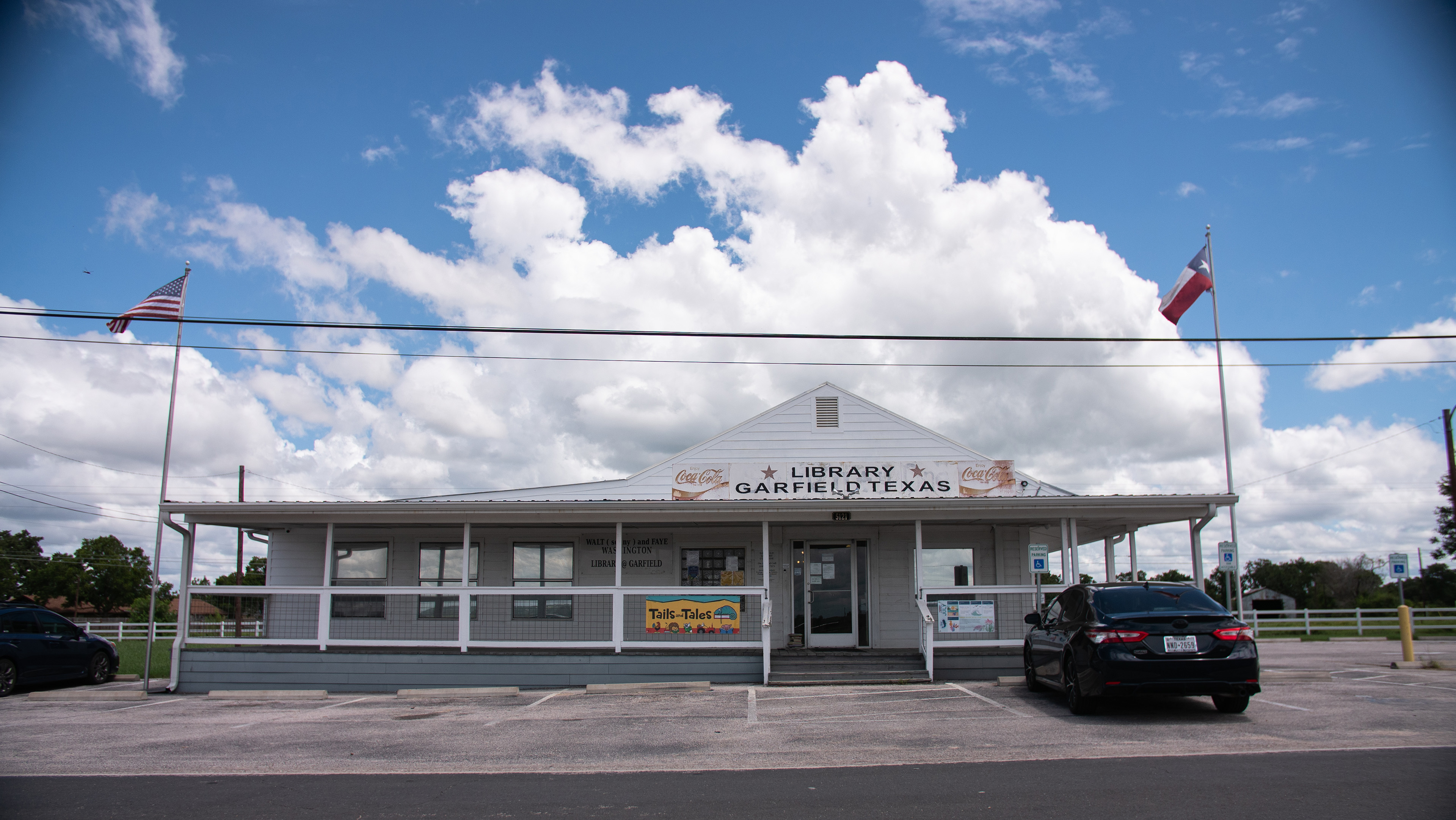 A sign outside the Garfield Library advertises the 'Tails and Tales Story Time'. It’s one of the only programs for children during the summer in the Del Valle area.

“I cannot think of anything where [parents] said, “Oh, we're not here because we're doing blank,’” says Brittany Burke, the assistant director of the East Travis Gateway Library District.

Story Time was one of the first in-person events their libraries held when Covid cases started to drop in Travis County. But getting the word out, or checking to make sure it didn’t conflict with other events in Del Valle, proved challenging. The library used Facebook ads and word of mouth to get the word out.

“There's not a bulletin board, or… a newsletter or a calendar somewhere out there,” Burke says. “If it’s not on Facebook, you’re not going to find it.”

Angel isn’t the only parent struggling to find places to take her kids during the summer. U.S. Census estimates for 2019 show roughly 22% of Del Valle residents are under the age of 14, but there are few places within the area hosting programs or events for kids. Del Valle does not have a community swimming pool. And while there is a Del Valle Community Center, it’s primarily a base for social programs and does not have the facilities that other centers have, like the dance room and computer labs at the George Morales Dove Springs Recreation Center. 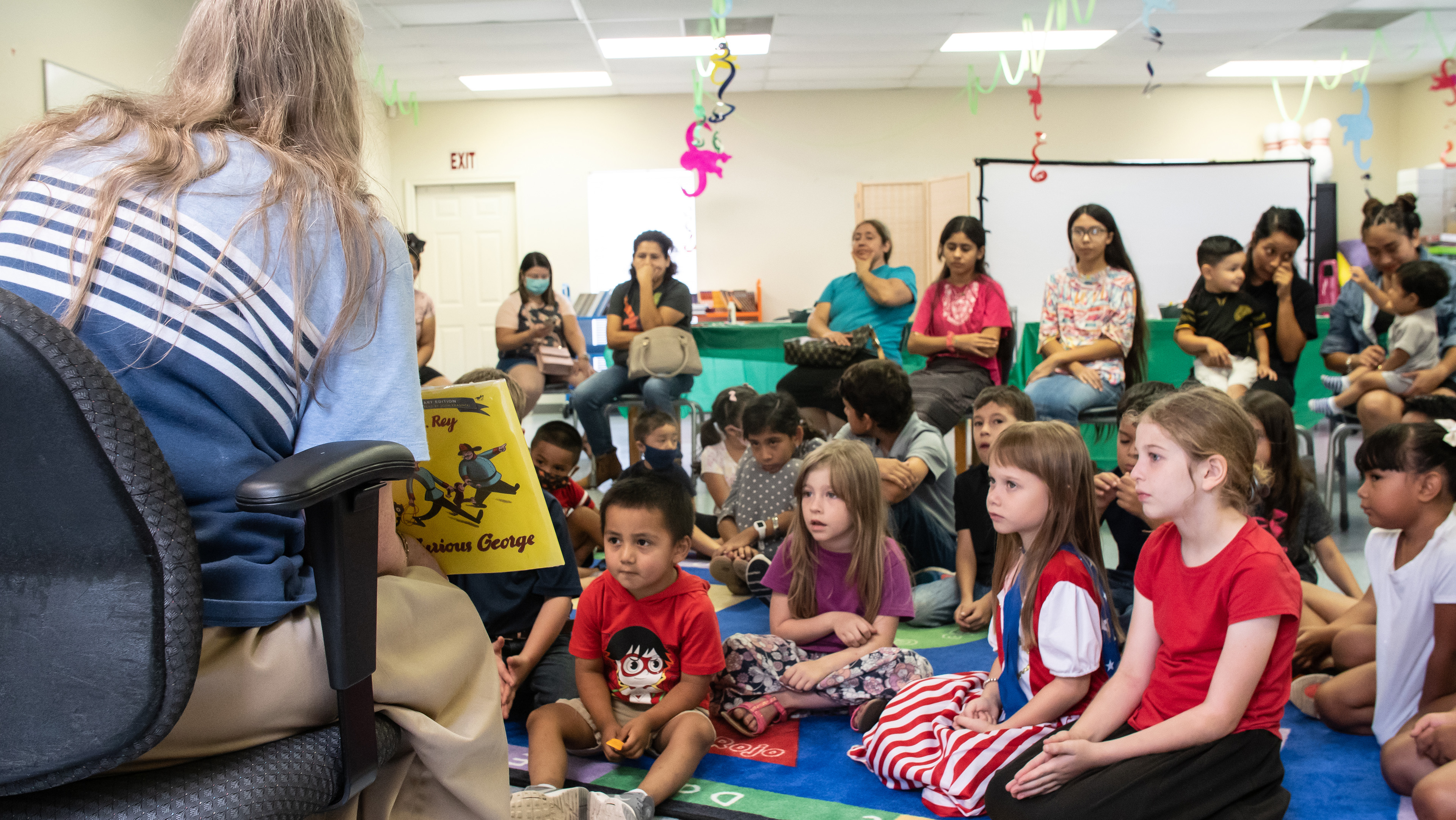 Librarian Sandy Coupe reads a Curious George book to families at Story Time at the Elroy Library. Children also get a chance to work on crafts, play and read other books.

Mendy Ruiz is a mother of four who lives in Del Valle, and says that even taking the kids to parks in the area comes with its own complications due to the ongoing pandemic.

“Even now that the parks have opened, they still have bathrooms closed,” says Ruiz, who’s youngest child is six. “It's not as fun to take a group of kids to a place where there's no bathroom.”

Sasha Salinas just started bringing her two daughters to Story Time. She says having children’s programming at a local library is helping her save both time and money.

“If you want to go downtown, I mean, it’s nice, but you have to drive, and park, and that costs money,” she says. 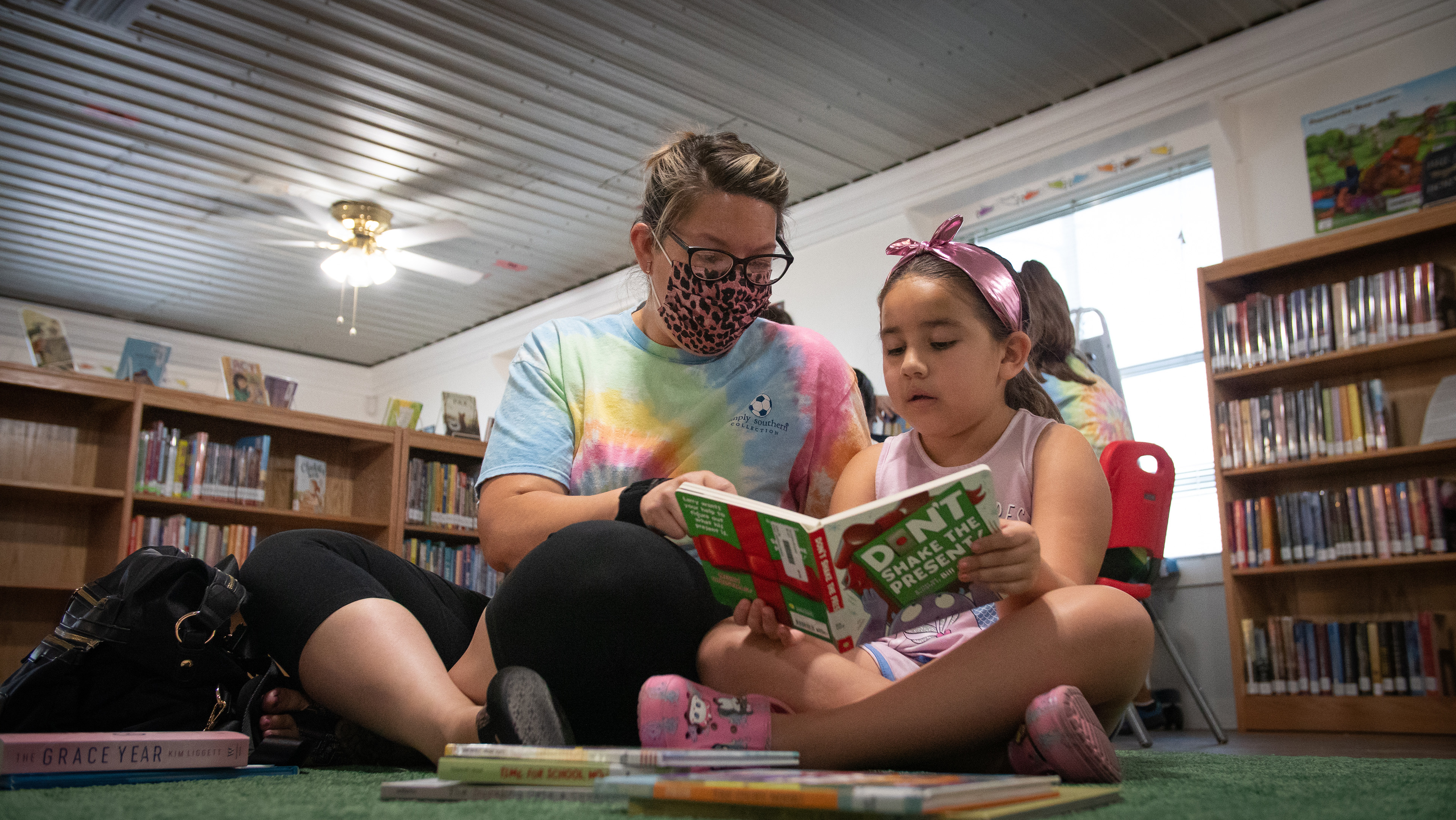 Sasha Salinas reads a book with her daughter, Sydelle, after Story Time at the Garfield Library. Salinas says her family enjoys the Austin Central Library but getting there can be complicated. "It’s nice, but you have to drive, and park, and that costs money", Salinas says. "I’m glad I have the two options [in Del Valle]".

Salinas isn’t alone in that concern. A 2018 Nerdwallet survey found that the average cost for kids’ summer activities, like day camp or movie tickets, was roughly $470 per child for the summer. Additional expenses like fuel and parking fees can add to the financial burden.

Things are even further complicated when both parents are working full-time. Texas advocacy group CHILDREN AT RISK has classified the Del Valle area as a child care desert. In some areas there are roughly five childcare slots per 100 children of working parents. Many children find themselves in a gap where they don’t qualify for subsidized pre-k, but their families can’t afford the fees.

In an effort to combat this issue, the Austin City Council voted to adopt the American Rescue Plan Act Spending Framework, which would earmark $1.5 million dollars for early childhood education for Del Valle Independent School District. The funding will allow almost 200 children to attend full day dual language pre-k. But even with the additional funds, there are still several weeks in the summer where there are few places to go.

That’s important for all Del Valle residents, not just those with kids. Burke underscored the importance of having a community space where people could discuss shared experiences, where neighbors could gather and where people could feel a sense of ownership. 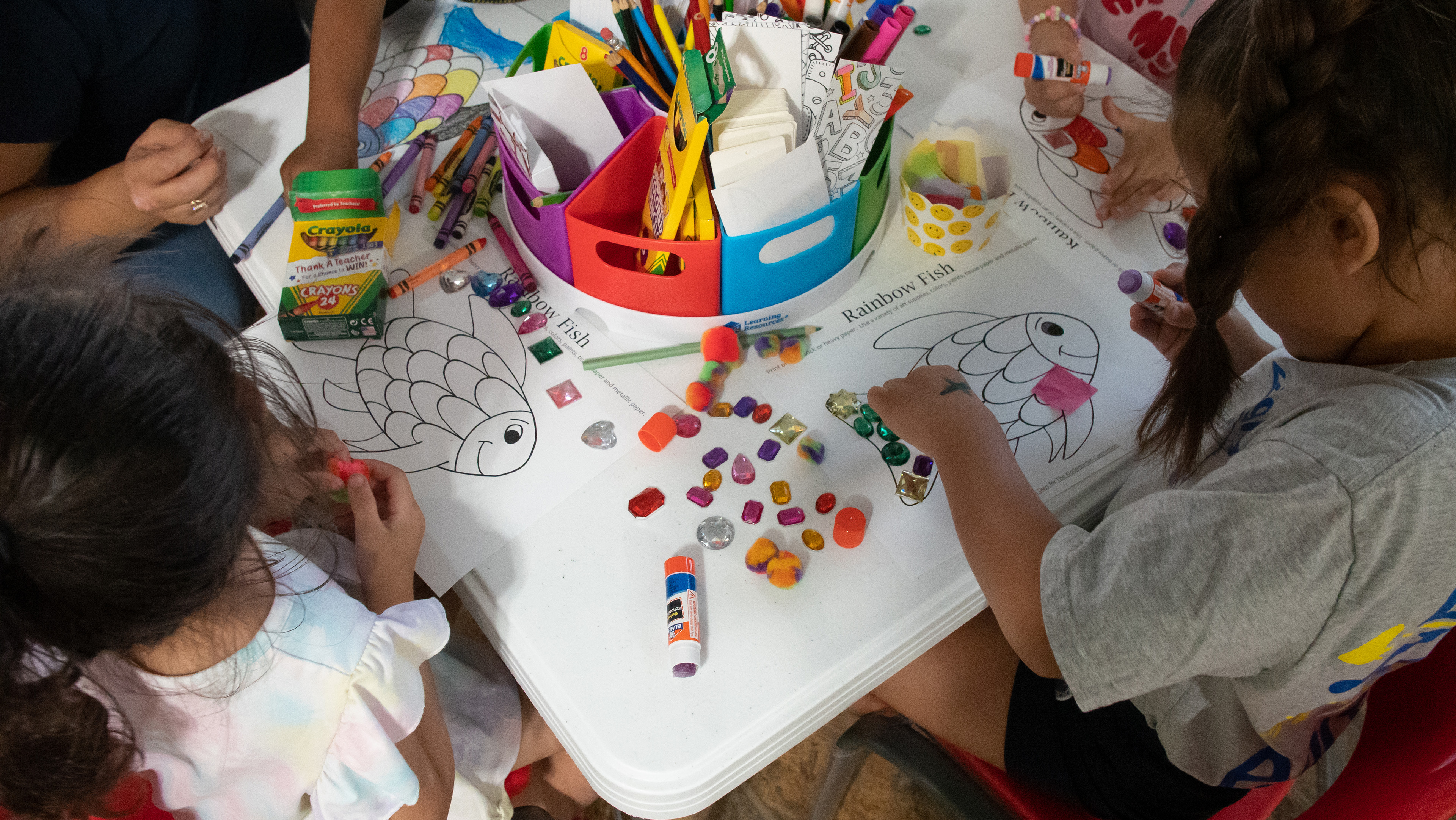 Children make rainbow fish by gluing jewels and tissue paper to a printout. The Del Valle libraries have also screened movies and hosted a petting zoo as part of their ‘Tales and Tails’ theme for Story Time.

Helping fulfill some of that need is Burke and the teams at the Garfield and Elroy libraries.

“Programming has just gone so well,” Burke says. “It was better than our wildest dreams. This has been an incredible summer and we're actually continuing it … most likely the rest of the year.”

Burke says the East Travis Gateway Library District has already started working on scheduling and promoting their fall programming. She hopes that as word continues to get out about the children’s programming available at the libraries, it will grow into a community hub. But regardless of how many other families arrive, Angel and her children plan on being there. 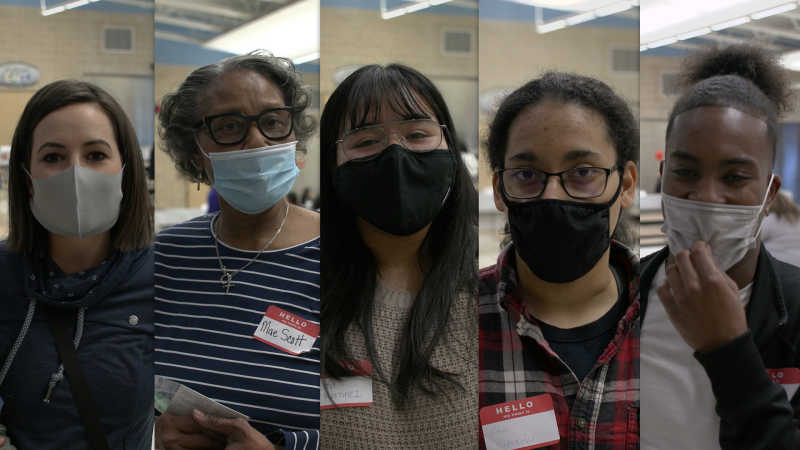 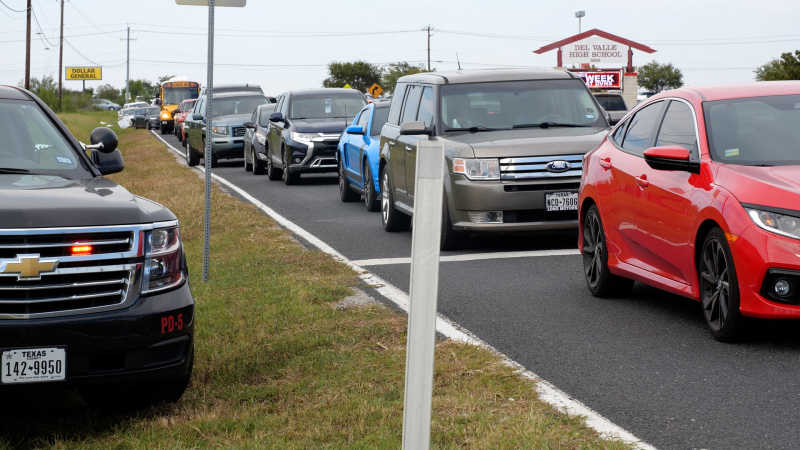 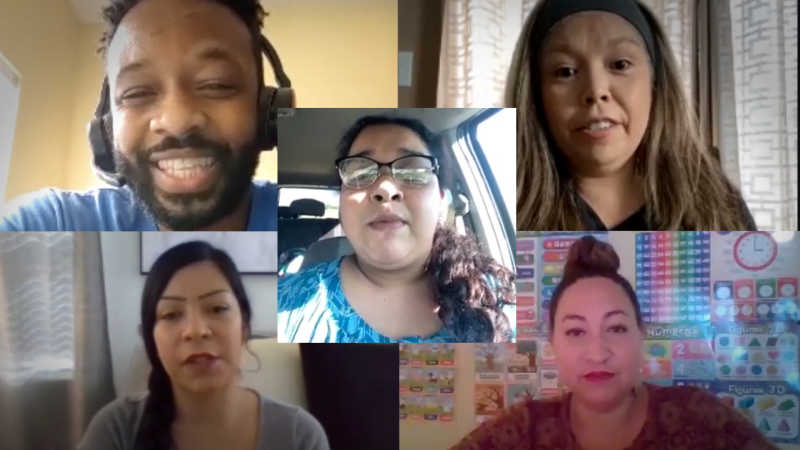