In March of 2021, the Decibel team announced we were shifting our reporting focus to Del Valle. In the nine months since, we’ve covered a range of stories on everything from traffic and transportation to tamales. While we’re already looking ahead to new stories to share in 2022, we wanted to take a moment to reflect on some of our favorite projects from this year and the residents we’ve been lucky enough to meet along the way. Decibel Executive Editor Samantha Guzman spoke with Visual Journalist Blair Waltman-Alexin about her favorite project and why it involved breaking out sneakers and a whole lot of GoPro cameras.

This interview has been edited for length and clarity.

Samantha Guzman We’re here to talk about some of the best work we've done this year. But before we get to your favorite story, I want to just talk a little bit about your approach to storytelling. You're, what I like to call one of the OGs here on Team Decibel. You've been on the team for a while. What do you think is the magic essence behind what makes a Decibel story, a Decibel story?

Blair Waltman-Alexin Oh, that's a good question. I think it's two things. I think the first thing, which is always the most important thing, is just the way we're getting to the stories to begin with. So the fact that every story is starting with listening to the community, hearing what their concerns are, what they're excited about, what they want sort of championed that nobody else is talking about. The fact that that's the jumping off point to me is always the little extra extra spice that makes it really stand out.

SG You said it's one of two things, right? So what's the second thing?

BWA I think the fact that we get to spend as much time as we do with the stories. So all of our stories have a written component and then we have a video that goes with it as well. And we really get to craft a story over several days of filming with a person. We get to hang out with them and talk with them. … But on the flip side, we have this written piece, [where] we can really get into how big some of these issues are. … So we really kind of get to hit both ends of it where we get to do something very personal and very creative, but then we also get to really kind of show you the scope of what we're doing.

SG I mean, I say this all the time, but it kind of is remarkable, all of the things that you all are able to do. You just sort of summed it up, right? It's not just a video, it's a written story. You’ve made graphics for stories in the past. So y'all really put in a lot of work into these pieces, and I think it shows.

All right, so what do you think was your favorite story that you worked on this year?

BWA I went back and forth on this a lot, but the one that I landed on was Road Runners. If you haven't seen it, we are following a Del Valle resident, Rogelio Rayos. He got into running kind of by accident. He was training to join the Texas National Guard, and then he just loved it. He was running with groups in Austin and enjoyed that, but wanted to find a group closer to home. And he saw that there wasn't one yet. And he was like, “Well, I'll do it. I'll just start one. That'll be me.” 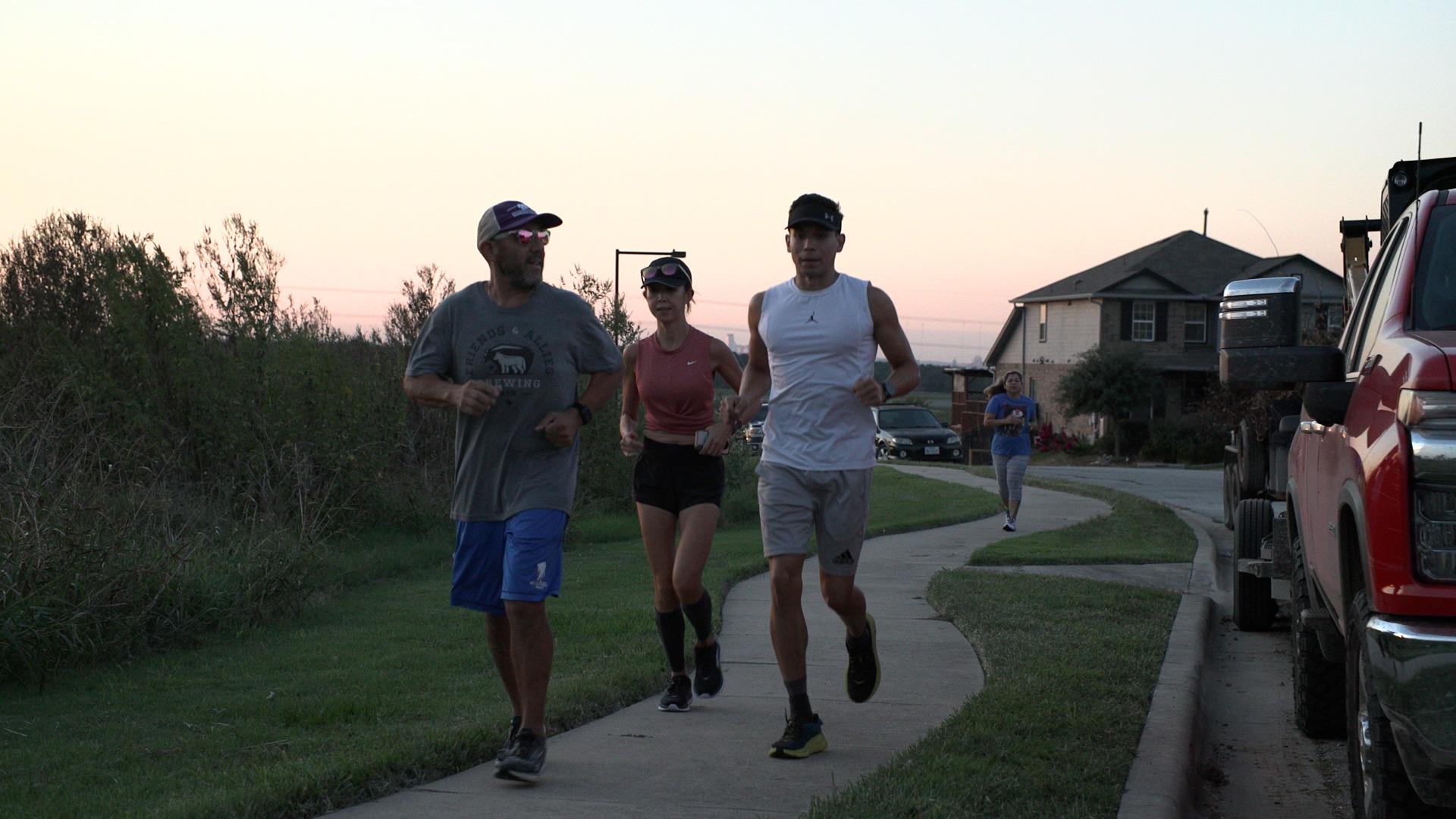 From left to right: Ramón Arizpe Jr., Rina Fernett, Antonia Facundo and Rogelio Rayos jog together as part of the Del Valle Road Runners Wednesday meetup. Several members said part of the reason they joined the group was because they met nearby.

SG So folks may not know this, but you yourself are a runner. What's the longest distance that you've run?

BWA I've done a marathon. So, 26 miles in one go. I’ve done more than one, because I don’t learn quickly, so I just keep signing up for more punishment, basically.

SG What expertise do you think you brought to the story since you're a runner yourself?

BWA I think, oddly enough, timing. I kind of had a good sixth sense of, it's going to be about eight minutes for you to get from here to there. So I have enough time to drive, get the gear out, set up, [and] they'll come by. Now I can get in the car and go to the next place. The best help that it gave me was that.

SG I mean, videographers, photographers, we love to say that most of our work is just about waiting and timing, so I think that expertise definitely came in handy for you. So what was most challenging about working on this story?

BWA So this is where the running expertise was not helpful. I knew exactly what shots I wanted to get, which led to my brilliant idea of strapping a lot of GoPros onto a bicycle and basically stalking this man, twice. That didn't pan out quite as well as I was hoping, but we learned some things. 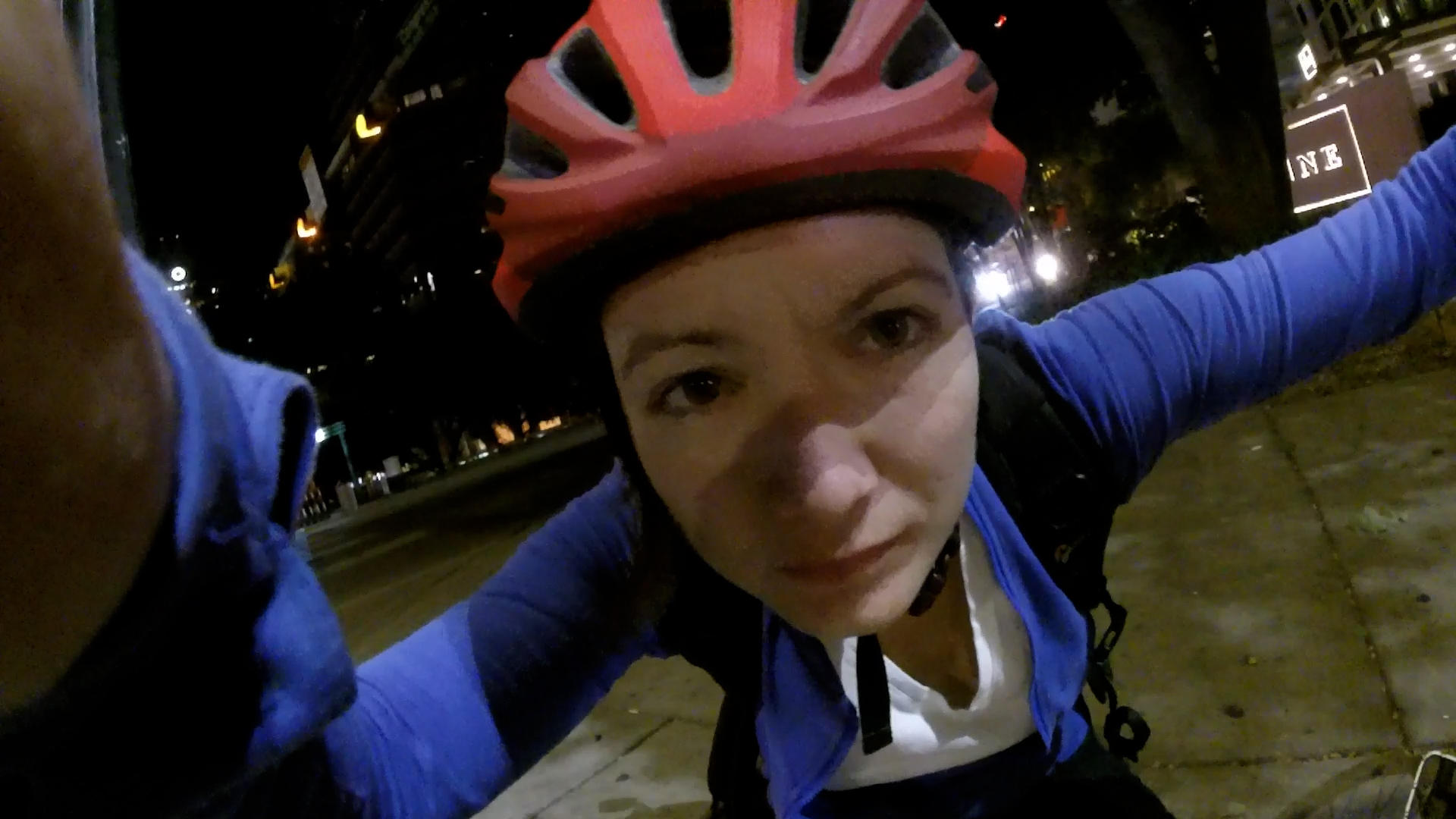 Decibel Visual Journalist Blair Waltman-Alexin peers into the lens of a GoPro camera as she adjusts its position on a bike handlebar. While her running experience helped inspire her photography on the story overall, in this instance she says it didn’t quite go as planned.

SG How did our method of listening first lead you to this story?

BWA In a lot of our first listening sessions, the things that we were told by folks was that it's really hard to find out about stuff going on around Del Valle. But the other thing people told us was everyone finds everything via social media. So that's where we started looking. And that's where we found the Del Valle Road Runners.

It really is a good example of how all of our stories kind of start with this foundation of community listening. We got this story because of advice from the community. It wasn't specifically, “Here's a running group,’ but it was, “Here's how you find out what's going on around here.”

SG Why, ultimately, did you want to tell this story?

BWA Well, partly, it's like you said, I am a runner. So it definitely tugged at my heartstrings a little bit. But I think something specifically that spoke to me about it was when I first came here, this is how I learned Austin was by running. That's how I made connections and friendships. And that's how I really learned how to get around in the city was by running through random neighborhoods.

And so whenever I saw that he was starting this group, it immediately made sense to me why. It's beyond the practical reasons. It's also building a sense of community. And I really wanted people to take away that that's something that you can just do. It can be a small thing but you can do something that adds to your community. 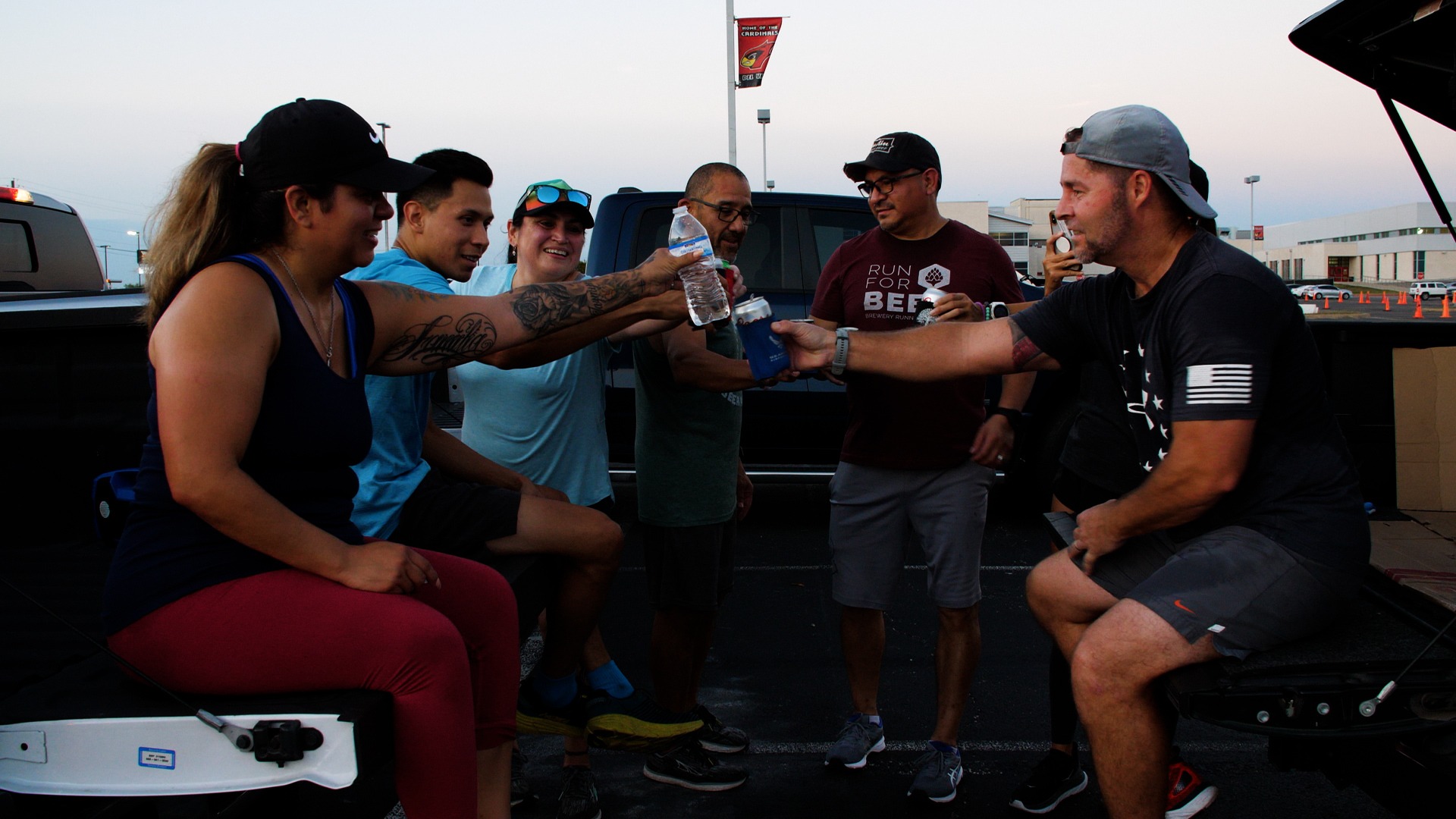 The Del Valle Road Runners share a post-run toast. Rayos hopes the group fosters a sense of community in Del Valle and will help bring neighbors together.

SG I think you've summed up perfectly what I love about our stories. Because our stories on the surface might seem like it's about one thing, but actually it's about another, right? And so we've put together this story about running but really, it's not about running. It's about building a community, it's about finding your place in the world, and who can't relate to that?

So what's one thing that you wish our audience knew about what goes into making a Decibel story?

BW That it's very personal. It's not just about getting a story; you really are building a relationship with this person and you want them to feel like it's their story, and we're just a pathway through which they get to share it. 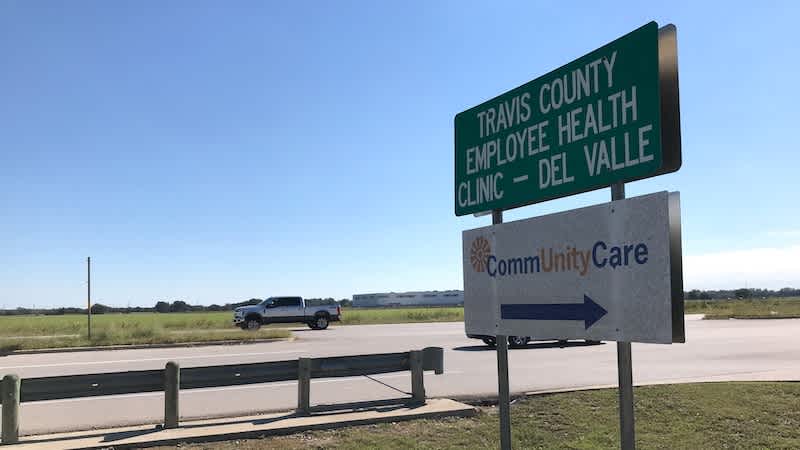 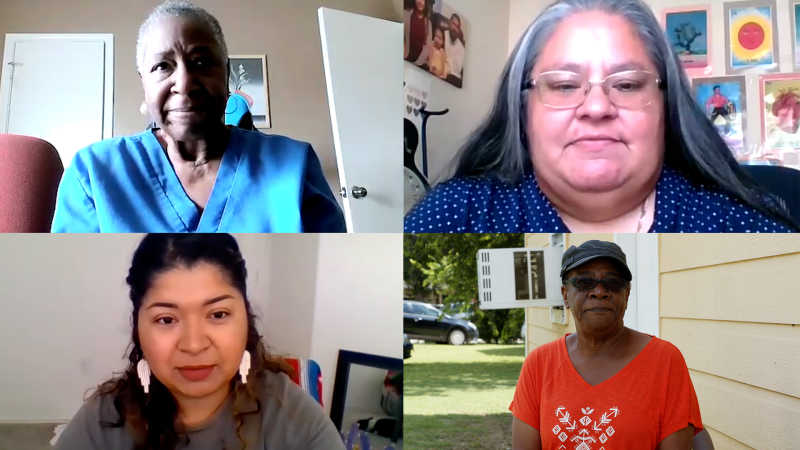 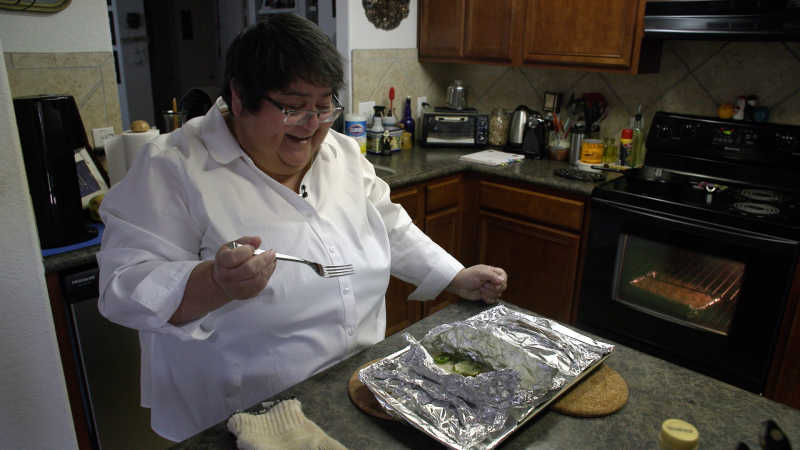