Sammy and her two children are divided on what groceries they should pick up today.

It’s a debate familiar to any parent at any grocery store. But Sammy, who spoke on condition of anonymity, and her family are at a different location: the Saffron Trust Women’s Foundation site in Pflugerville. Here people can pick up prepared meals and rescued grocery items for free and get connected with other resources. Many of the attendees, like Sammy, are new to food pantries, but rising inflation has pushed them into trying to find ways to save money.

“I’m a part-time teacher and it just really, really helped with our bills and everything,” Sammy says. “This was like a godsend.” 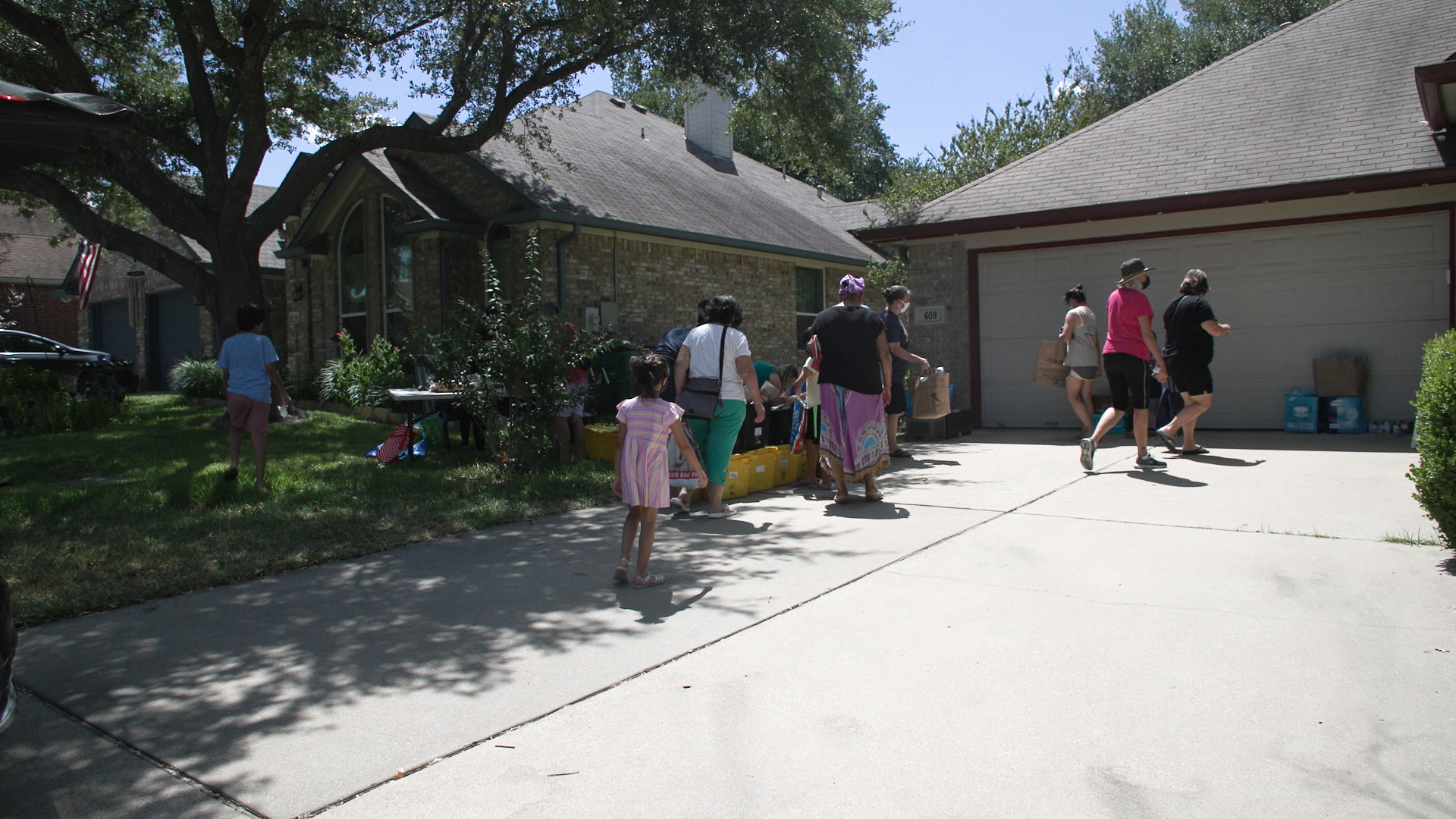 Residents pick up groceries and meals at a temporary Saffron Trust site in front of Stacey Fletcher’s Pflugerville home. Fletcher started a Facebook group, Food For All Project Pflugerville, where she posts daily updates on available items and locations.

The site is one of many helping Pflugerville residents navigate food access gaps made even wider by rising inflation and the end of pandemic programs. Last year food banks saw a dip in demand as people began returning to work. Now rising inflation has caused costs to skyrocket on everything from gas to groceries and housing. Some estimates show rent in Pflugerville is up more than 25% from last year. Sharon Mays is the chair of the Austin-Travis County Food Policy Board, and she says the increased cost of living in Central Texas is being felt at the dinner table.

“As it continues to become increasingly unaffordable and unlivable, you now have people in this category that were not there before,” Mays says. “And of course food is related to so many things as far as health and nutrition … it is a lot.”

Sammy found out about the Saffron Trust Pflugerville site on Facebook, where Stacey Fletcher, Pflugerville program manager and pantry docent for the site, posts updates on each day’s available items. Since she started managing the site in December, she says people come in not because of one issue, but many issues compounding each other.

“With the pandemic, a lot of families have collapsed on each other,” Fletcher says. “I think there's more people coming now because they're feeling some of the catastrophic things just all piling on each other … if you haven't eaten and you're in crisis, it's even worse.” 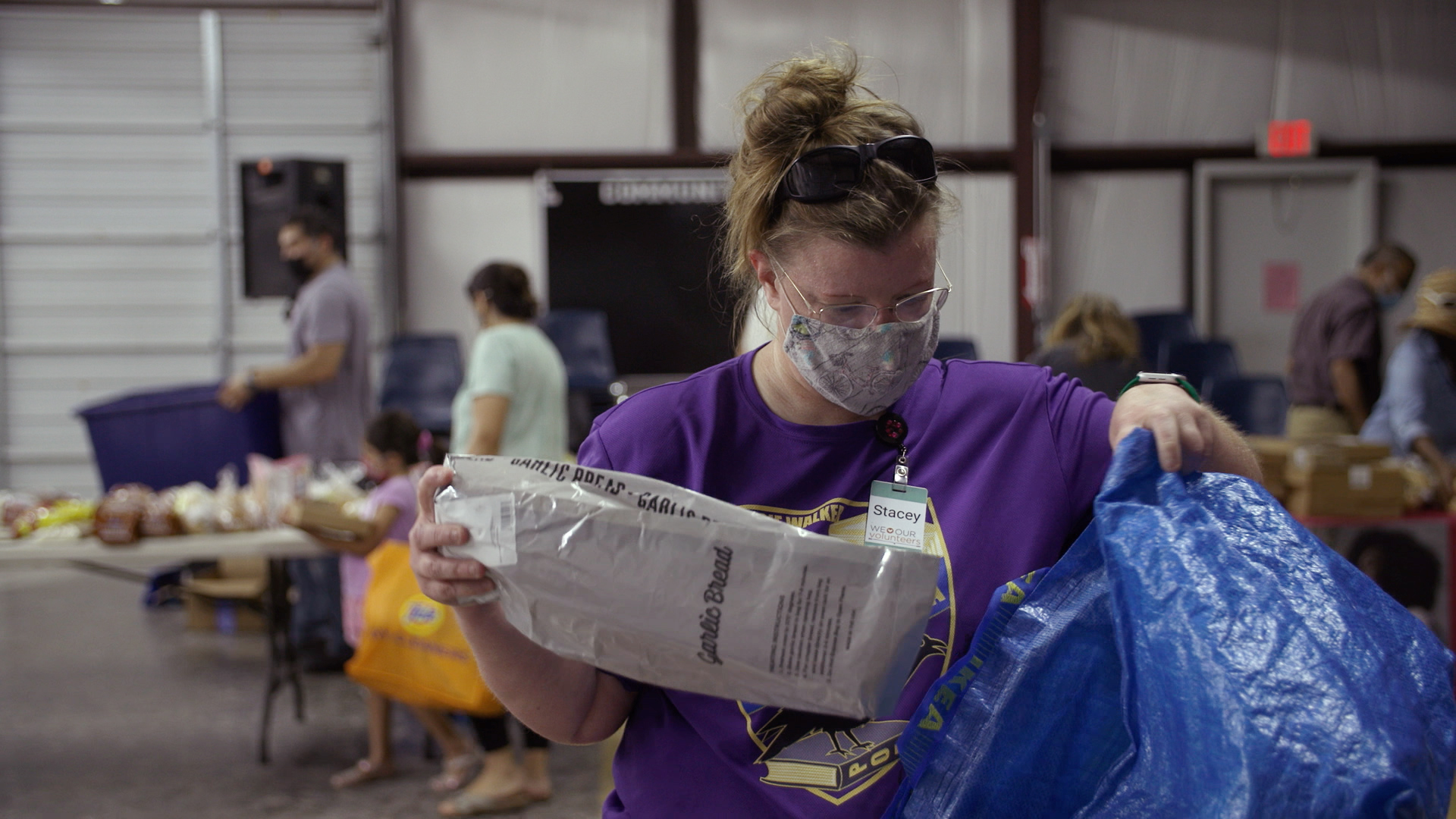 Texas has quite a few people not getting enough to eat. Roughly 4 million Texans are food insecure, and 1 in 5 children in the state experience hunger, according to Feeding Texas. While programs like the emergency Supplemental Nutrition Assistance Program, or SNAP, have been extended by Gov. Greg Abbott through August, Fletcher says a lot of people are not getting that assistance.

“It seems like a lot of the state agencies are … backlogged,” she says. “There's people that cannot get food. They've been designated that they need the food, but they cannot get it.”

Reports from across the state back what Fletcher has heard about issues accessing SNAP. The Texas Health and Human Services Commission manages the program. They point to an increase in application volume and a decrease in staff as contributing to wait times. But many visitors at the Pflugerville Saffron Trust site don’t qualify to receive assistance. According to the Texas HHSC website, a family of four can’t receive SNAP benefits if they earn more than $3,644 per month. Cost of living calculators show a family that size would need to earn roughly twice that to live comfortably in the Central Texas area. 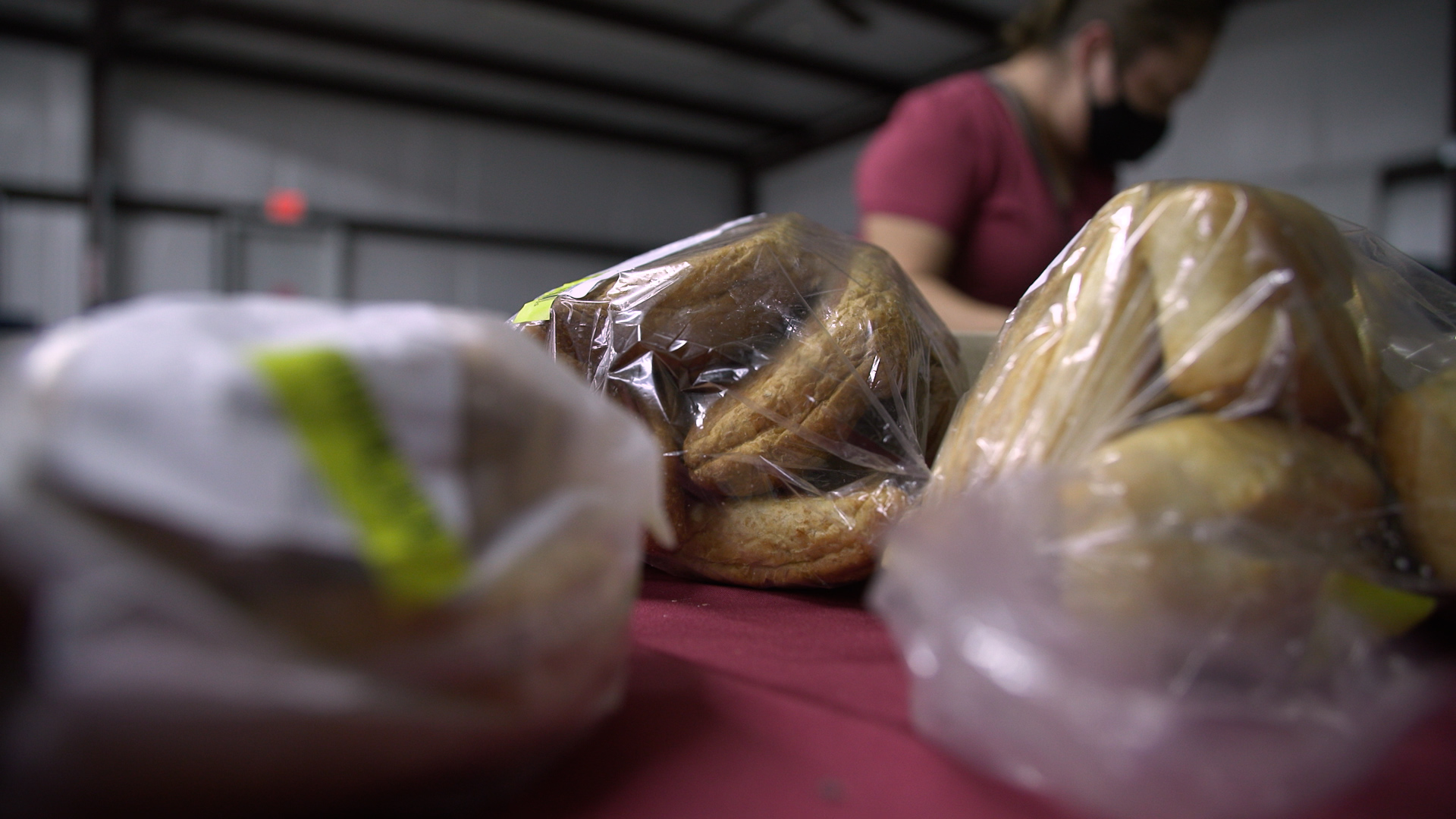 A woman peruses the grocery items available at the Saffron Trust Pflugerville site. According to Feeding Texas, roughly 4 million people in the state are food insecure.

It’s not just state programs that residents need to qualify for. Local programs are also having to change their parameters. Meals from The Cook’s Nook have been a mainstay at the Saffron Trust locations. Since the program is funded through Travis County, recipients have always had to live within county lines. But now they must also meet federal poverty guidelines. Pflugerville’s location means that some site attendees can’t receive meals because they are too far over the line, either financially or geographically.

“Pflugerville is right on the edge of Williamson County,” Fletcher says.“That hurts my heart because there's so many people that are right over it.”

Joi Chevalier is the founder and president of The Cook’s Nook, and she says the new contract guidelines from the county stipulate gathering more data on who is receiving meals. The hope is that the additional information will help the county better understand the level of need in the community. They are also working to expand access to residents in more rural areas who can’t make it to sites like the one in Pflugerville. Chevalier says the goal is to make the process as simple as possible.

“The organizations still have a way of tailoring those things and encouraging people to come,” Chevalier says. “The goal is not to create barriers but to track and document and do so at a low barrier of entry.” 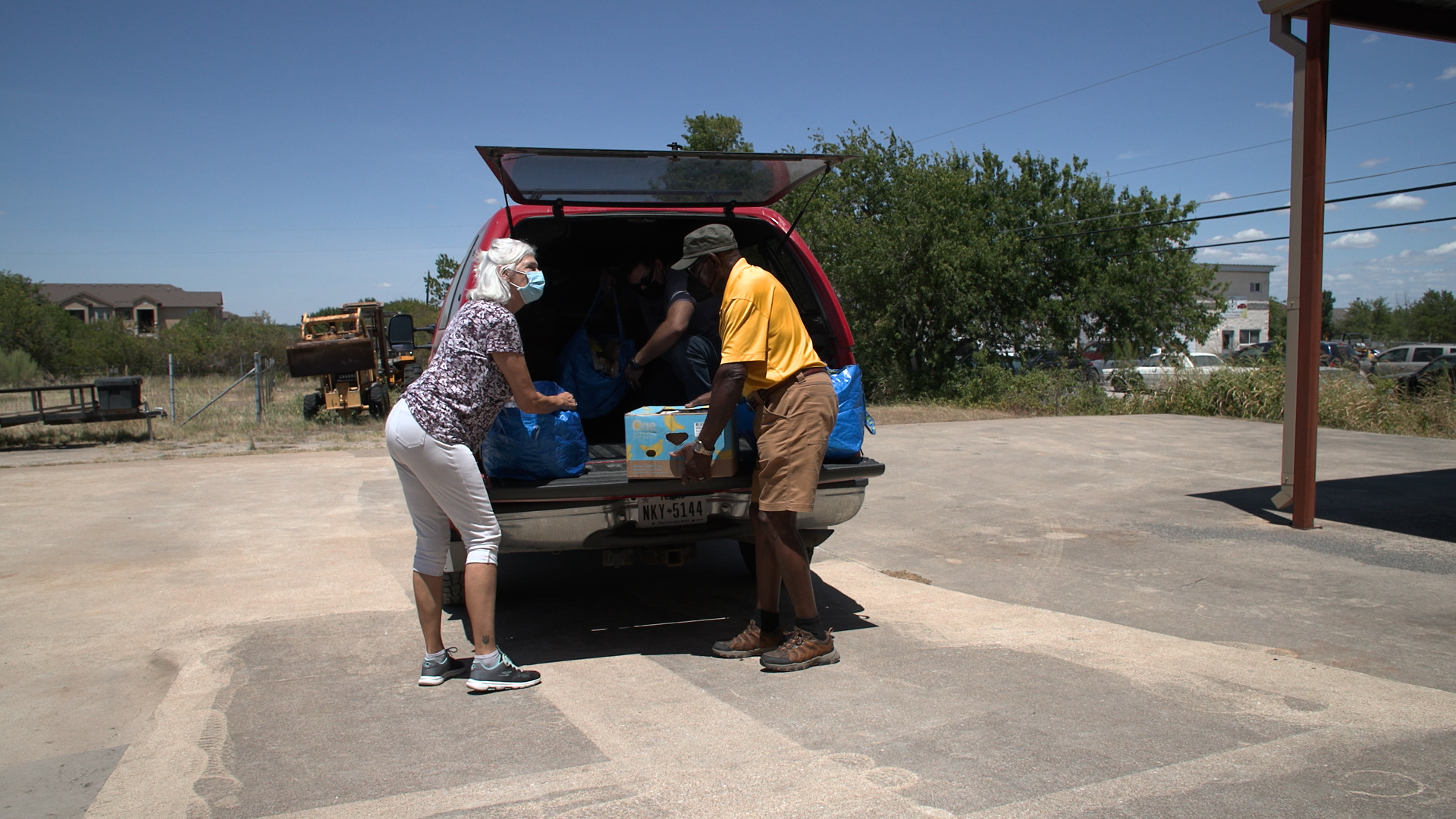 Volunteer Alex Marek (left) and St. Mary Missionary Baptist Church Deacon Bob McGregor (right) unload a delivery of rescued food items. Fletcher says since December they have given out roughly $14,000 worth of groceries.

For those that don’t qualify for aid programs, the Saffron Trust site in Pflugerville has a daily grab bag of rescued groceries available to anyone who wants or needs it. Food rescue, or food recovery, means diverting foodstuffs from the trash and donating it to people in need. And it’s been popular in Pflugerville. Fletcher estimates that they’ve given away roughly $14,000 worth of groceries each month since December.

“If I post something, you’ve got to get to the site,” Fletcher says. “It's gone quick.”

Whether individuals qualify for food assistance or not, there’s another barrier for those in need that may be the most difficult to overcome — shame. Fletcher says pantry shame has been the biggest surprise for her since starting to work at the Saffron Trust site, and it can keep people from getting the assistance that they need.

“People don't want to talk about … their total family income,” Fletcher says. “It's hard. Everyone feels like they're under a microscope, and they feel like you're amplifying that they don’t make a lot of money.”

Fletcher points out that food is often only one facet of the problem, as families and individuals face cascading issues. With inflation at a 40-year high and the average amount of savings dropping about 15%, making ends meet has become challenging.

“There's zero shame in getting help” Fletcher says. “And if you can, all I ask is you pay it forward later.” 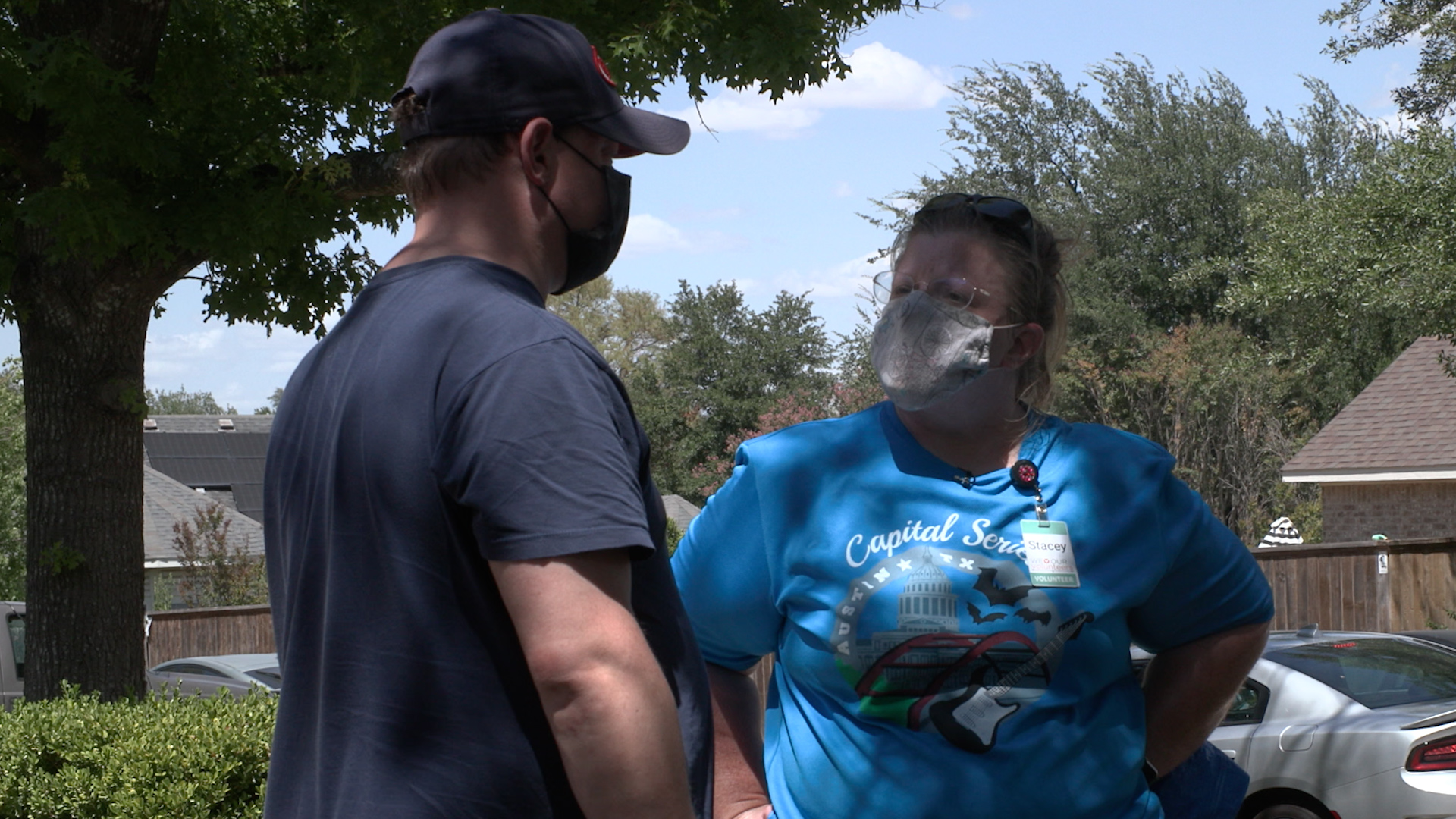 Fletcher (right) speaks to a visitor interested in volunteering. She sees her role as connecting people to help each other. It's a network of people that want to do good and use the resources that they have,” Fletcher says.

Many Pflugerville residents have done just that. A host of volunteers keep the Saffron Trust site running daily, assisting in food rescue runs and setup. The site also has guides to help attendees sign up for SNAP or other resources. Others offer up whatever skills they have, like repairing washers and dryers or fixing cars. One older attendee gives out walking sticks he carves by hand. On a particularly sweltering August afternoon, an attendee approached Fletcher and asked about volunteering. He was between jobs, but wanted to help out where he could. For Fletcher, this is what it’s all about.

“It's putting people together,” she says. “It's a network of people that want to do good and use the resources that they have.” 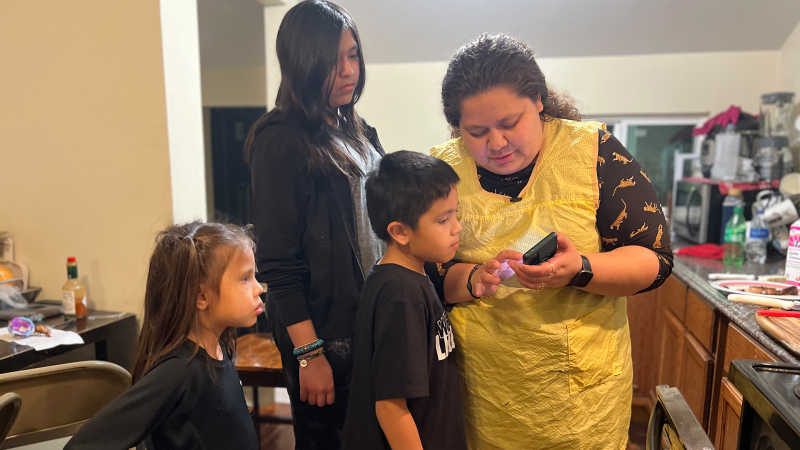