Isis Nieto had been living in Del Valle for several years before her oldest son was ready to learn how to ride a bike. But early into the lesson, the chain slipped. As Nieto’s husband fixed it, she pulled their bike from the garage so she could demonstrate to her son what he would be doing.

Part of the reason her son hadn’t seen her on a bike before is due to a lack of places to ride. Nieto describes her neighborhood in the Stony Ridge North development near Popham Elementary as very rural, with lots of country roads. But the area is developing quickly. New housing additions are going up, and signs dot Elroy Road advertising new corner marts coming to the area. What hasn’t been added as quickly are pathways for pedestrians. 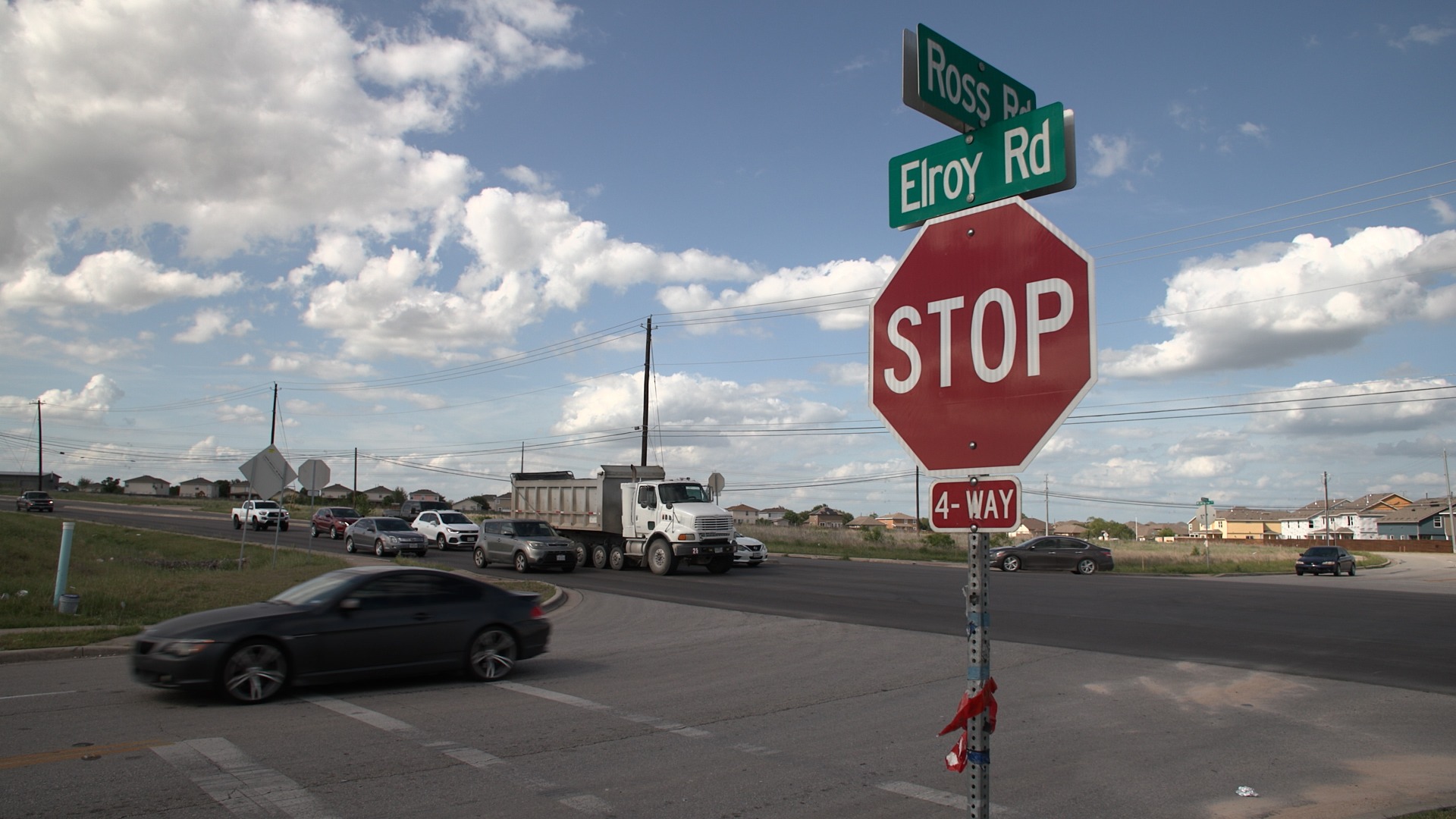 Cars stream through a four-way stop at the intersection of Elroy Road and Ross Road. Experts say that while road and highway construction are often the top priority for transportation infrastructure, bike lanes and sidewalks are often an afterthought.

“I'm concerned about how fast we're developing without really sidewalks and street lights,” Nieto says. “I'm hoping that will come in also, but that is a little concerning.”

Interest in cycling is on the uptick. A report by the U.S. Census Bureau found that over a 10 year period, biking had the largest percentage increase in usage over any other commuting mode. That interest was only heightened by the pandemic, with some cities seeing a 150% increase in bike traffic.

But bikes are still far from the favored mode of transportation; 0.5% of U.S. workers commuted by bike in 2019. A big part of that is a lack of infrastructure to keep cyclists safe. Junfeng Jiao is an associate professor in the Community and Regional Planning program at The University of Texas at Austin. He says pathways for pedestrians tend to be very low on the priority list.

“The majority of the transportation infrastructure funding goes to highway and automobile industry,” Jiao says. “The ranking goes automobile, a little mass transit, then a little bit [for] pedestrians, then bicycles.”

Jiao says this can be further complicated if people live in unincorporated areas like much of Del Valle. Code regulation and enforcement can be murkier, he says. And while one developer may decide to build out sidewalks, others may not, leading to a patchwork of walkable and bikeable communities.

“The regulation is sometimes not as strict as in a city,” Jiao says. “You see this all over the place. … It’s not just happening in Del Valle.”

Jiao says in a best case scenario, if all the stakeholders were interested in adding bike lanes and sidewalks, the project would take roughly five years. Nieto is less optimistic. 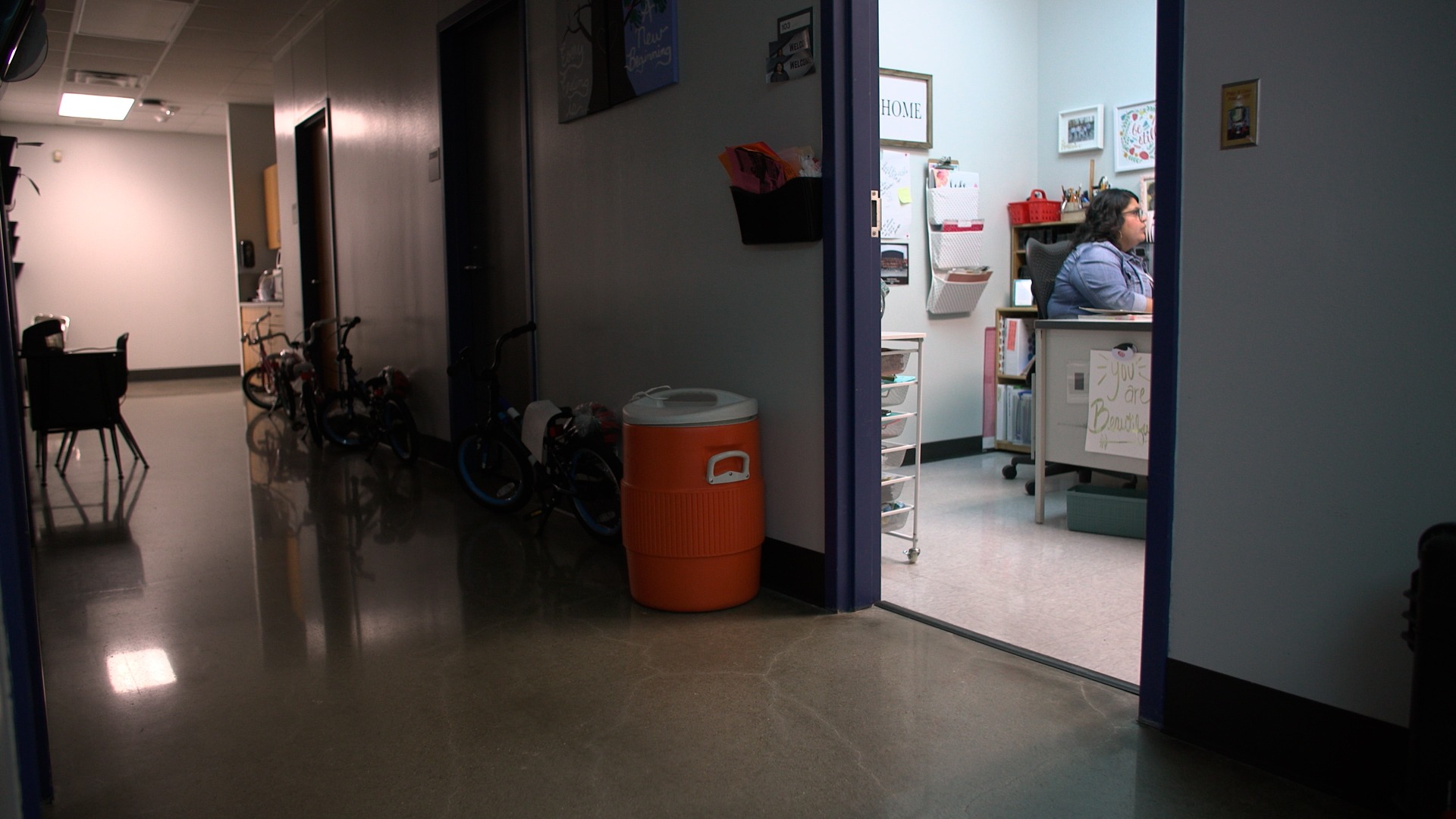 Nieto works in her office at Popham Elementary School. As the parent community liaison, part of her job is bringing programs into the school. So when the opportunity came to host a bike safety class, she jumped on it.

“I’ve been here 17 years and there’s development that hasn’t happened,” she says. “I’m not going to hold my breath.”

Long-term plans are great for city planners but less so for the families riding out the development wave in Del Valle. Nieto is a parent community liaison for Popham Elementary, and she wants the students there to have opportunities to get outside and explore the world now, not several years down the road. So when an opportunity came to bring a bike safety class to her school, she jumped on it. 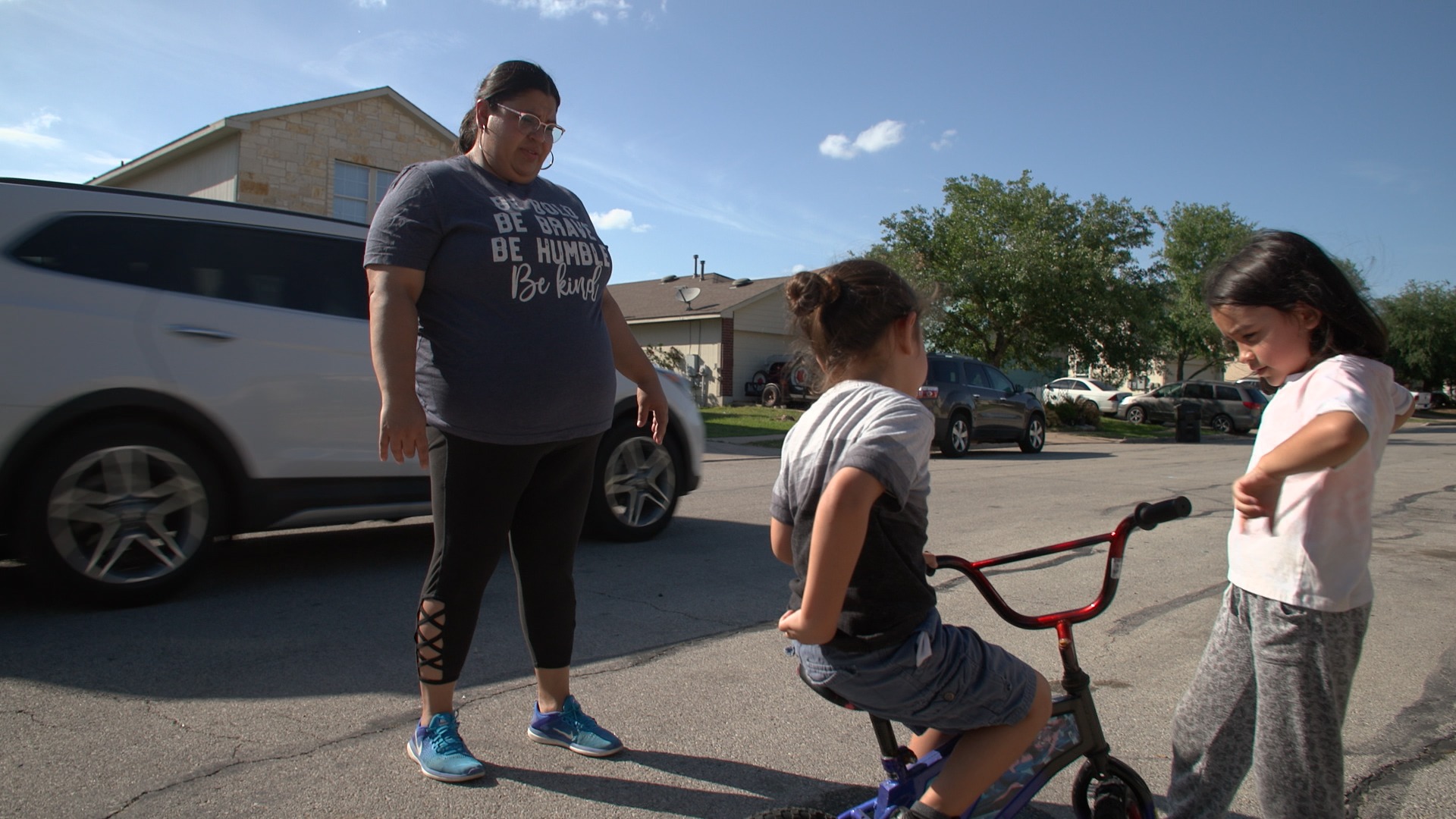 Isis Nieto (left) and her son Iker Sanchez (center) and niece Juliette Navarrete (right) wait for a car to pass so Sanchez can ride his bike. Nieto says she wishes there were more places in her rapidly developing area for kids to ride bikes and play safely.

The classes are led by the Ghisallo Cycling Initiative, a local nonprofit that aims to increase cycling in traditionally underserved communities by offering bike clubs, equipment and safety classes in the Austin and San Antonio areas. Briana Cohen is the Austin lead and community educator with the group, and she says growth is what also led them to Del Valle.

“Typically we work with AISD,” Cohen says. “This year, we started integrating our programs with Del Valle ISD as a lot of our students and families are moving further outside of the central city. So we’re keeping up with them.”

For their first foray in the Del Valle community, Ghisallo ran a bicycle skills challenge. For a week, third through fifth grade students came out in small groups and were taught how to signal turns, how to properly wear a bike helmet, how to scan the perimeter and, possibly most importantly, how to yell – loudly – what they were doing.

“Basically being able to communicate with either pedestrians or drivers on the road to make sure they didn’t get hit or run over,” Nieto says. 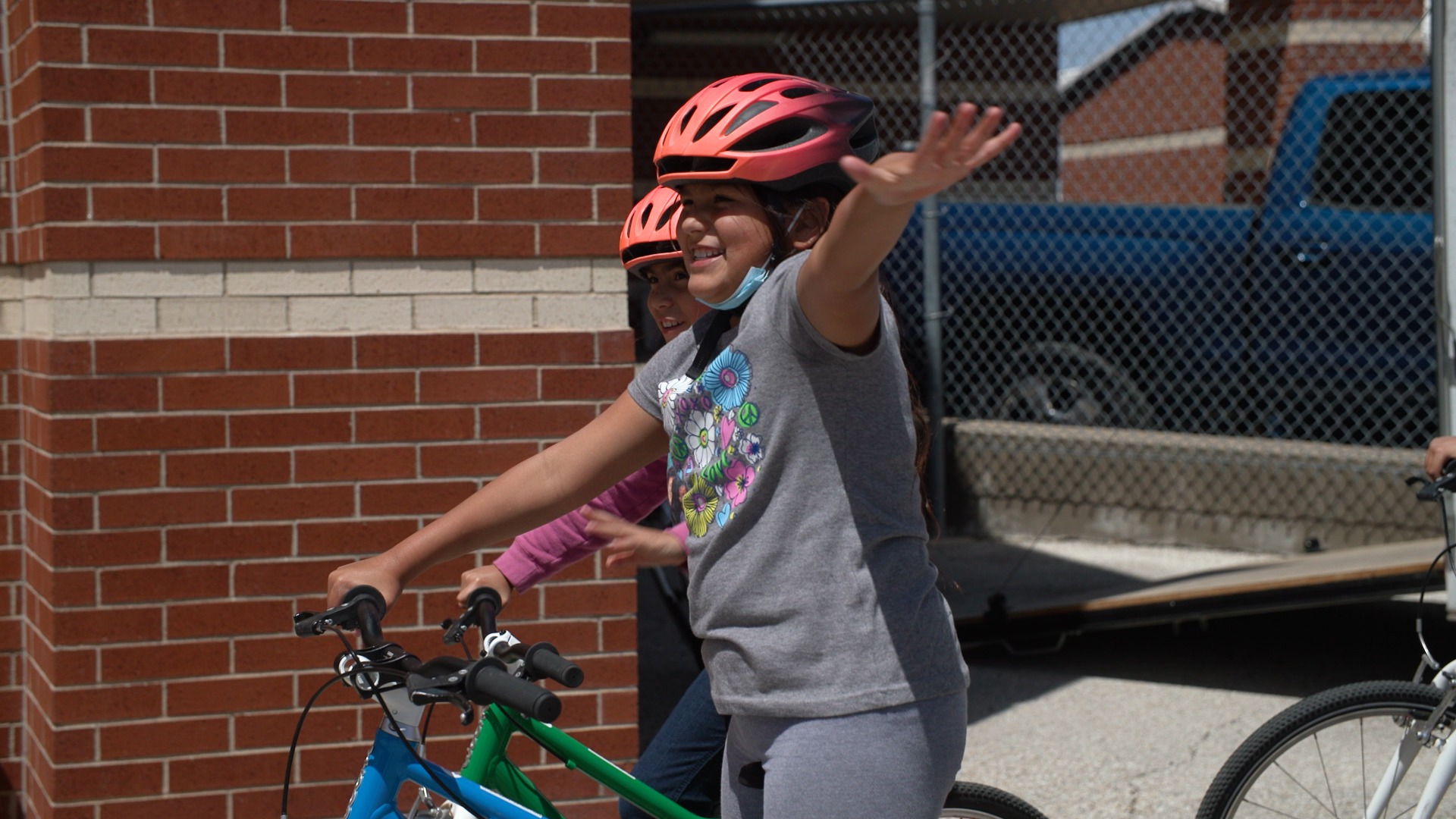 Cohen says traffic and infrastructure also played a part in Ghisallo’s decision to offer a training class at Popham Elementary. She says when looking at school sites to host programs, they evaluate traffic volume and speeds in the neighborhood to make sure it’s a safe area for kids to ride bikes. Del Valle, she says, offered a bit of a wrinkle.

“There's not a lot of public transportation or bike or walking infrastructure,” says Cohen. “It's very car-centric here.”

But construction timelines and infrastructure issues were most likely the last thing on the students’ minds as they zipped around the blacktop at Popham Elementary. Cruising on bikes brought over by Ghisallo, students gleefully shouted back signal instructions and raced their friends around a short loop. This, in Cohen’s mind, is the real goal of the project: building cycling confidence while having fun. 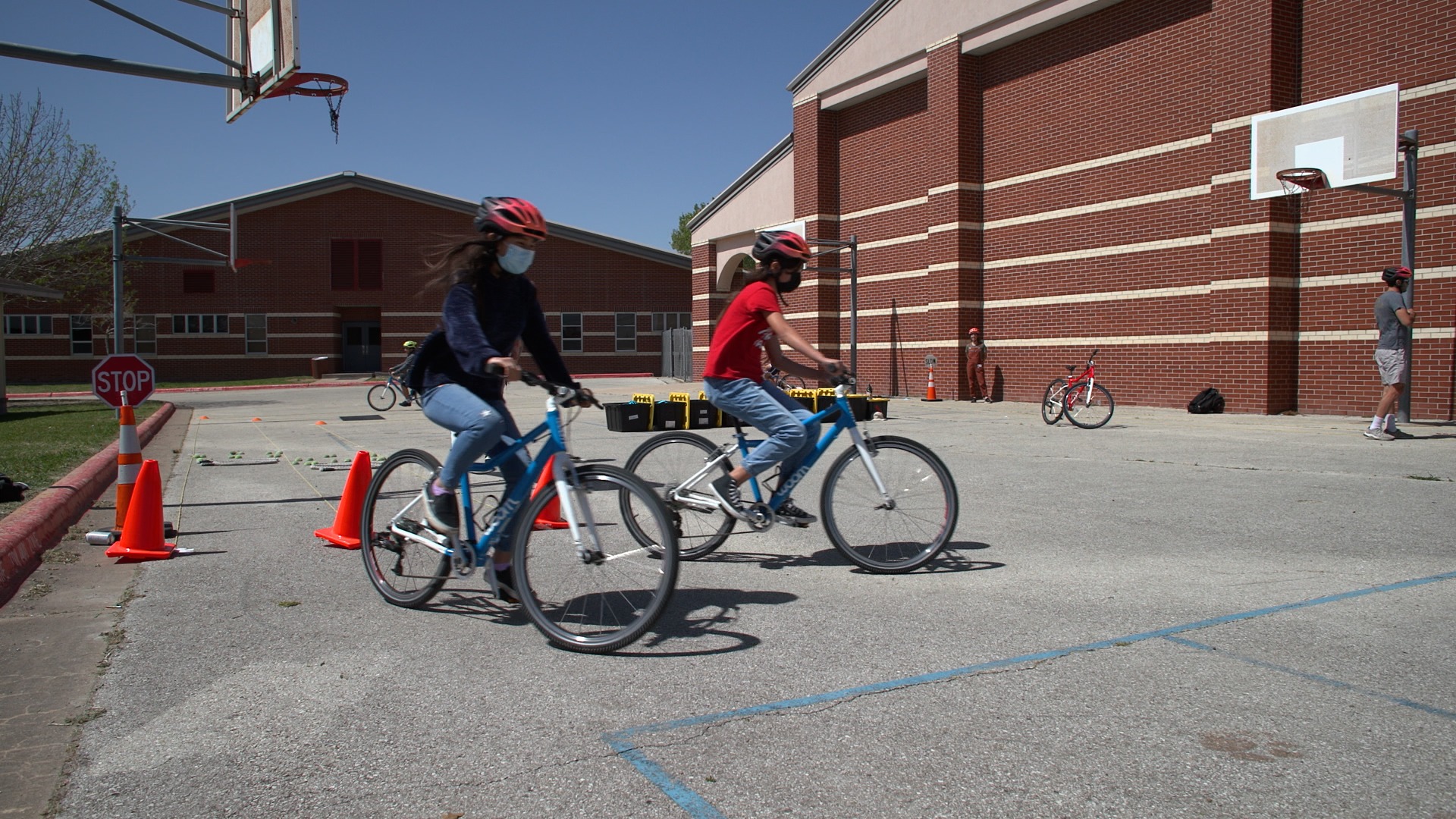 Popham Elementary students bike through the obstacle course set up by the Ghisallo Cycling Initiative as part of their bicycle skills challenge. Students learned how to signal, how to properly fit a bike helmet, and how to scan for cars or other obstacles.

“[This] is another opportunity for kids to get outside, to move their bodies, to de-stress from the normal school day,” Cohen says.

Nieto says the feedback from the students has only been positive. She’s already had a few students ask when they can do the bike program again. It’s what she’s been pedaling towards, the true end destination past infrastructure and sidewalks: offering students at her school a chance to have fun outside and learn while doing it.

“It was just great to see them enjoying being outside, and learning,” Nieto says. 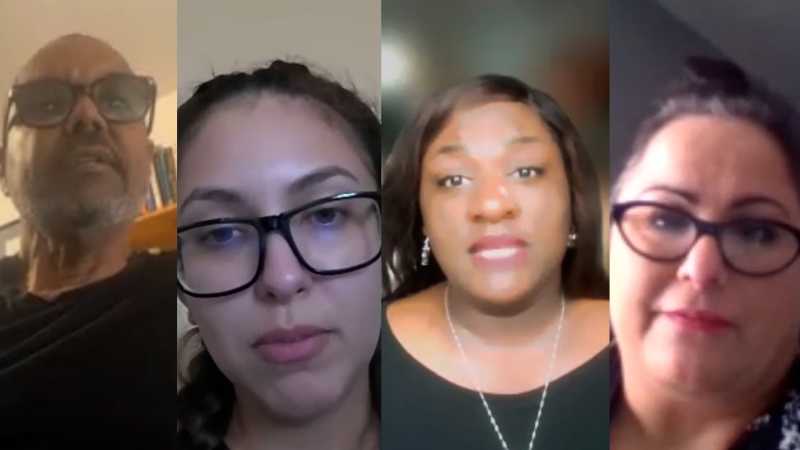