When you look at a map, it’s pretty easy to distinguish man-made boundaries from the rivers and oceans that have been codified into borders. The edges of Austin have both kinds of boundary lines. Some lines on the map flow like the water they trace, while in other places, like the lower right corner of the southeast border, the city seems to pixelate and fall apart in blocks.

Among those blocks is Del Valle, an unincorporated community with a school district and a library, but no government of its own. Unlike other small municipalities in the region, Del Valle never incorporated, and after having its most densely populated areas annexed by Austin, it will probably never get the chance.

As we heard in our listening session, there are even Del Valle residents that are confused about where its borders are and why some areas are served by the city and others are not.

In 1832, a Mexican nobleman named Santiago del Valle was granted the title to 10 leagues of land – about 44,000 acres – in southeast Travis County. In the present day, the land grant encompasses Dove Springs, Montopolis, and of course, the community that he never set foot in still bears his name.

Fuentes is one of many local officials tasked with serving a portion of Del Valle. As things exist now, parts of the community are represented by council members from districts 1, 2 and 3 and Travis County commissioners for precincts 1 and 4. For many residents, figuring out who to contact when problems arise is no small task. 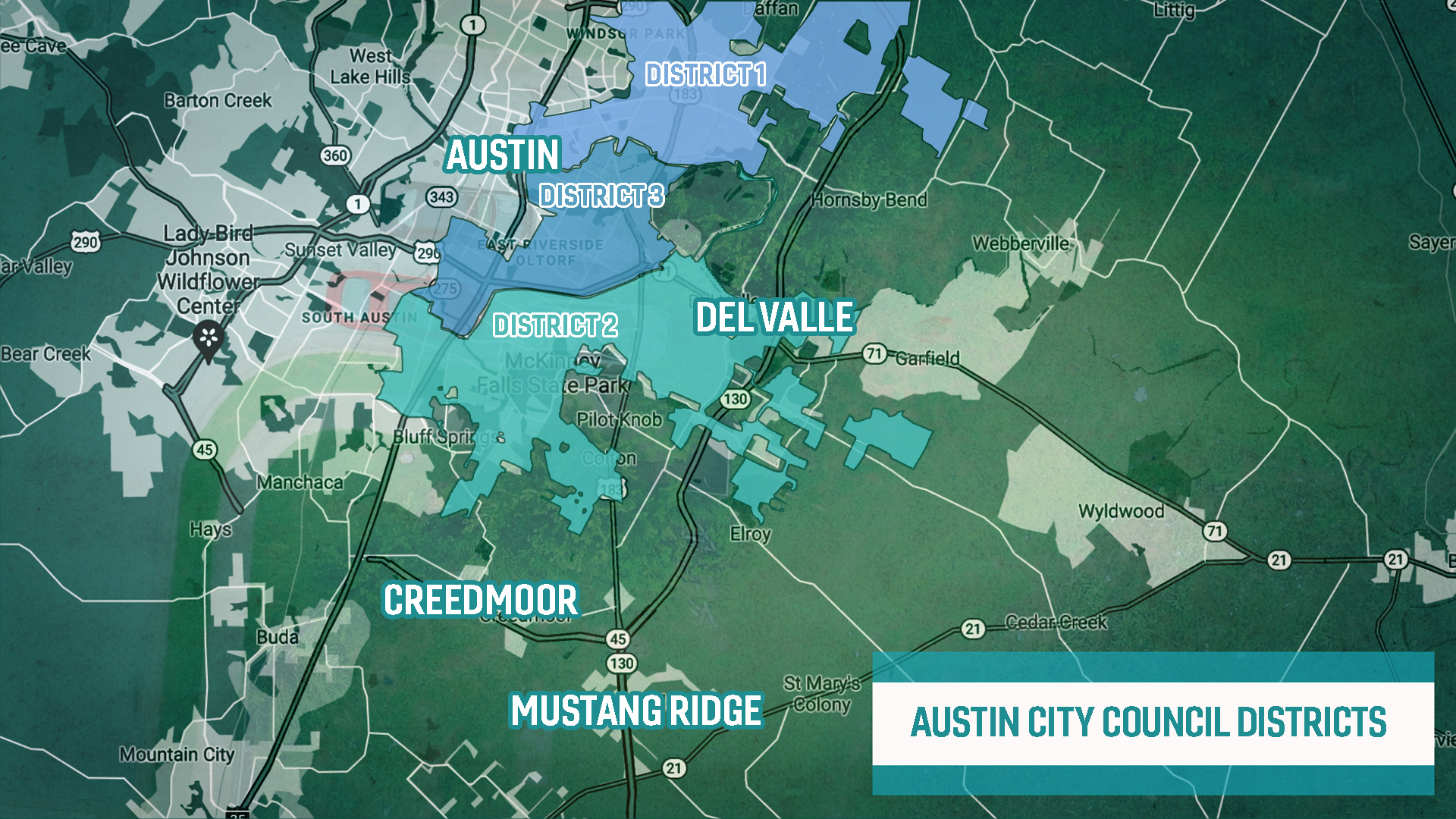 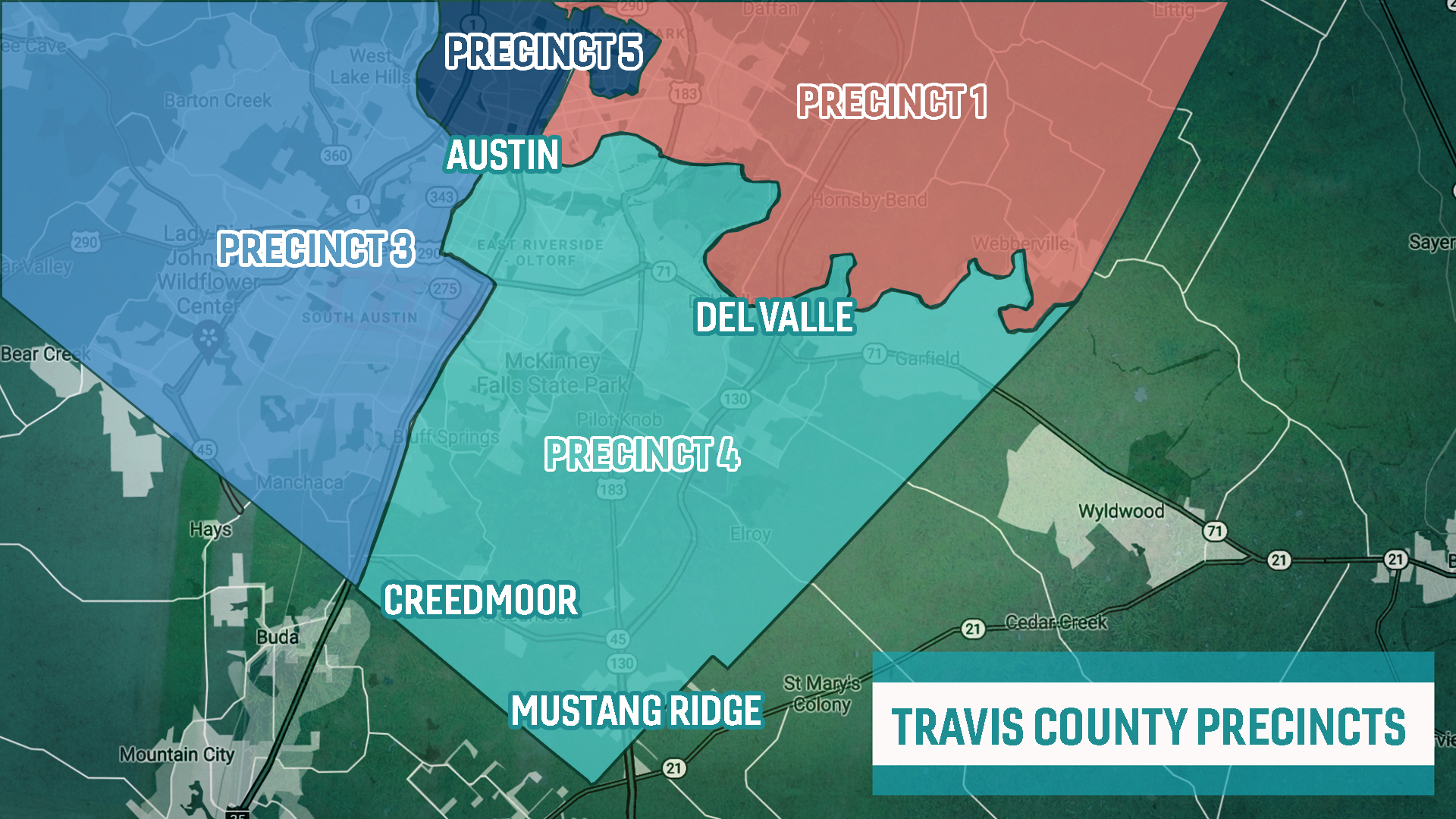 Del Valle falls between Precincts 1 and 4 in Travis County. Because some areas are incorporated into the City of Austin and others are not, it can be a challenge for residents to know who to reach out to for services like fixing roads. Graphic by Joe Rocha.

“It makes it challenging as a policymaker … it’s almost like you have to pass them to another individual because that is who can best help them for whatever the issue is,” Fuentes said. “But Del Valle present-day, a lot of our community members consider themselves part of the Del Valle community if they have a child within the school district’s boundaries.”

The Del Valle School District defines the parameters of the community for many. Despite that, being within the school district boundaries is not a reliable way to determine whether someone actually lives in Del Valle.

For one thing, Del Valle ISD encompasses a number of municipalities that are definitively not Del Valle. Creedmoor and Mustang Ridge are both cities in their own right. And many Del Valle ISD students live within Austin proper, in a school district that is drawn in the traditional Texan way, with borders that zigzag and loop through neighborhoods in unexpected geometries. 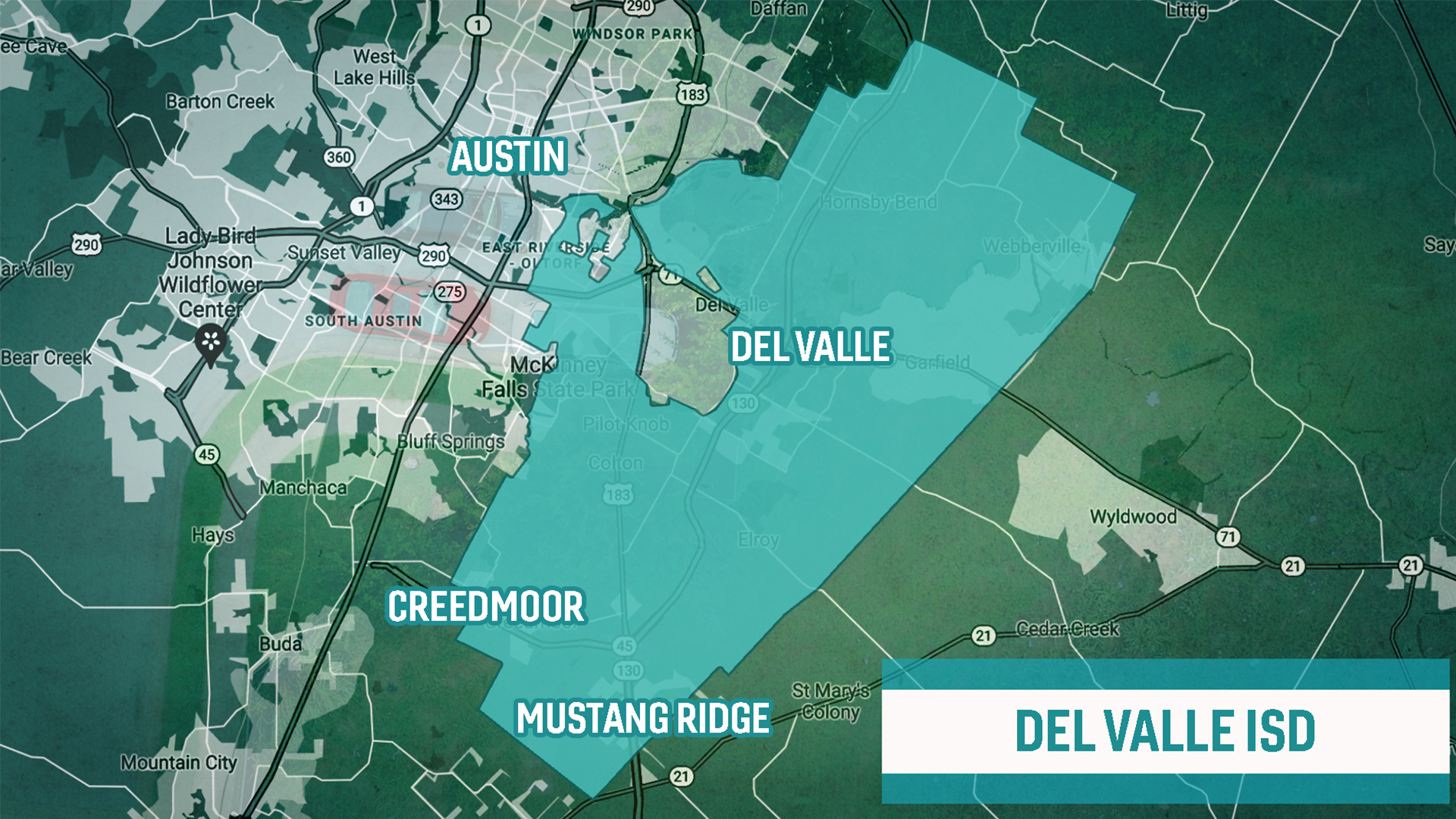 Although the Del Valle Independent School District includes municipalities that are not part of Del Valle, many residents consider the school district boundaries the true borders of the community. The Del Valle ISD boundary runs from as far south as Creedmoor up to Hornsby Bend and from the Pleasant Valley in southeast Austin to the Bastrop county line. Graphic by Joe Rocha.

In a conversation with the Monitor, McGhee explains that part of his own property is in Del Valle ISD and another portion is in Austin ISD.

“It was meant to give the newly-established Del Valle ISD a tax base, that’s why you have Baty Elementary on Riverside,” he says, elaborating on the district’s odd shape. “It’s always been a little funky. … This entire area, from Montopolis on down, is just kind of an afterthought.”

Travis County Commissioner Margaret Gómez has worked in and for Del Valle since 1973. Before becoming the county representative of Precinct 4, she served as a county aide, then constable for southeast Travis County. After all this time, Gómez says she “more or less” knows where Del Valle’s boundaries lie.

“It’s not really an organized community, in that there aren’t any real boundaries to it,” she said. “The reason I can’t tell you exactly where some of the boundaries are is because the city of Austin annexes some of those areas in, like, strips.”

Like Fuentes, she looks to the borders of Del Valle ISD for a rough idea, but Gómez explains that when someone calls her office looking for help with, say, a pothole, “We have to look on a map. It’s just because of the way that they do annexation. It’s kind of unusual.”

Gómez notes that the area is changing from rural to urban under a hodgepodge of city and county regulations. In some parts, the county offers law enforcement and repairs to public property like roads, but within city limits that isn’t the case. And while some of the development is subject to city statutes, neighboring land is only required to comply with county regulations that are much less involved and don’t include things like zoning.

“Thankfully, we do have a map that shows where the city is and where the county is. And so we have to explain that to people that call. It gets confusing, and I’m sure it gets frustrating as well,” Gómez said. “But that’s just the way it is out there right now.”

Indeed, the annexation of Del Valle by the city of Austin has not seemed to follow much of a pattern, as illustrated by the tracts of city land latticed through the community and the slapdash history of some of the larger parcels adopted by the city. In 1985, the city annexed Bergstrom to build a new airport, and in 1996, it annexed the area around the airport in an effort to manage its development. In 1998, the city annexed about 1,200 acres known as the “Del Valle area” on a limited basis, adding it fully to the city in 2001. In 2013, City Council voted to annex another big block that allowed it to lay claim to the Circuit of the Americas. 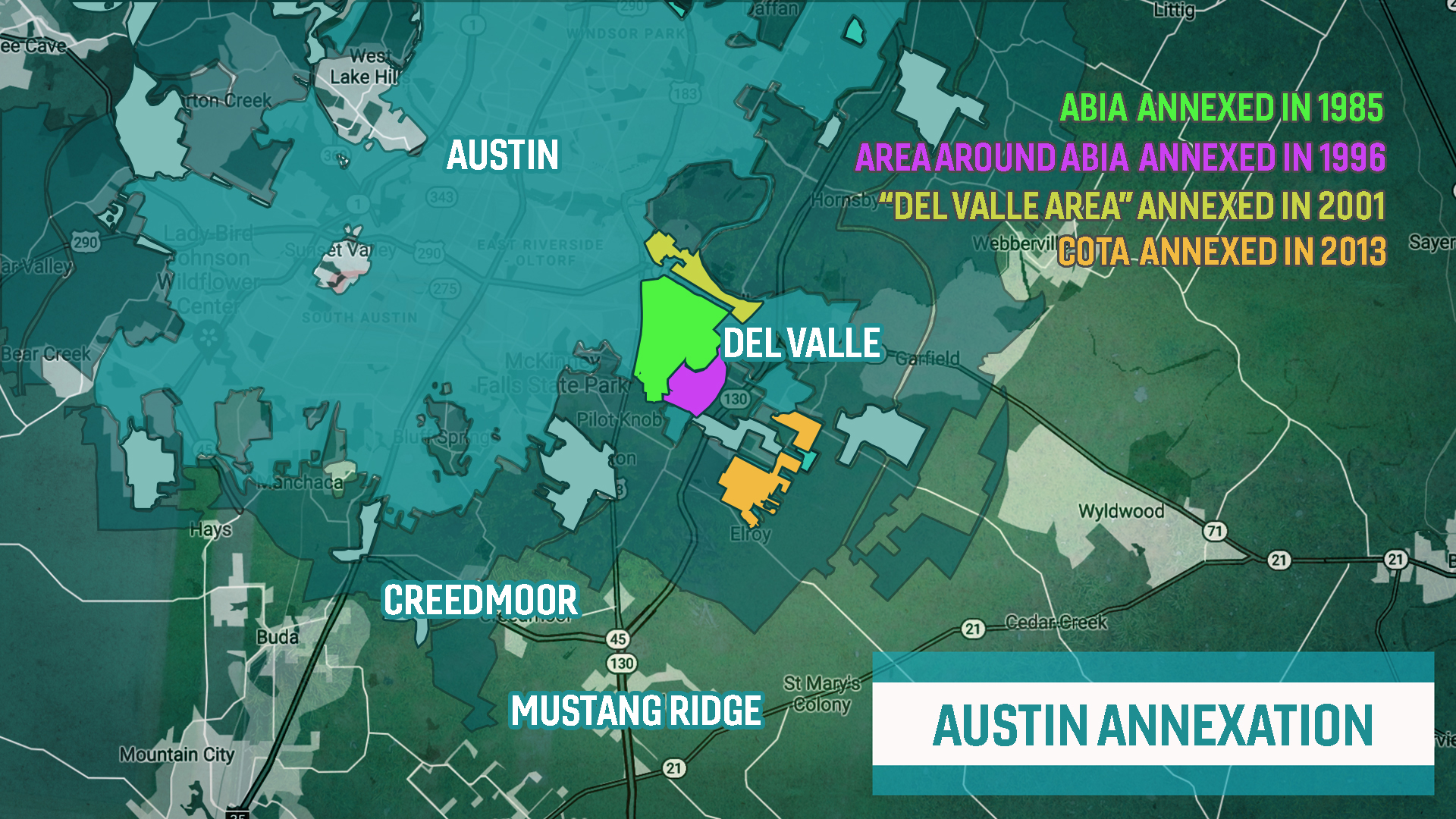 Swaths of land in Del Valle have been annexed by the City of Austin since the 1980s, including areas that now house the Austin-Bergstrom International Airport and Circuit of The Americas. The hodgepodge manner of annexation means that communities are split by these invisible boundaries. Graphic by Joe Rocha.

While the city is forbidden to “spot annex” communities, and annexations must be contiguous, city parcels in the southeast are strung together like pieces on a board game, codifying invisible lines through the community.

To make things even more complicated, the area is also home to a number of municipal utility districts that exist in a liminal space between the city and the county. 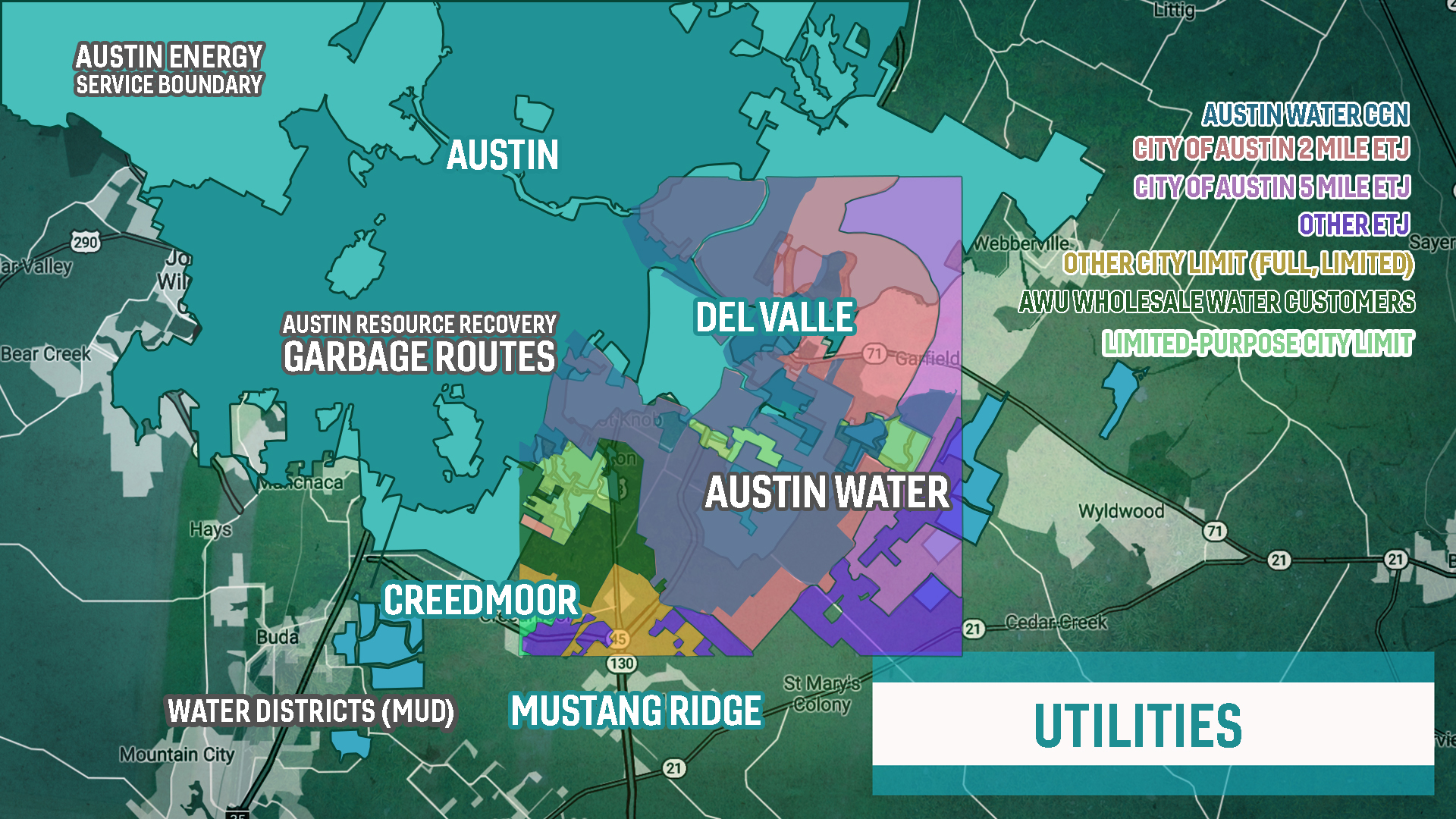 A host of municipal utility districts cut through Del Valle, and services can vary depending on whether an area is fully annexed by the City of Austin, part of a MUD or an unincorporated area. Some utilities, like Austin Energy, have service boundaries that go down the middle of a neighborhood. Graphic by Joe Rocha.

“It’s just kind of a patchwork,” explains Andrei Lubomudrov, a senior planner with the city’s Housing and Planning Department.

He explains that essentially, the area known as Del Valle is a mix of three types of land. Areas fully annexed by the city of Austin pay taxes to the city, and in turn, receive city services and law enforcement and are subject to its ordinances. People who live in places like MUDs, that are part of limited-purpose annexations, don’t pay taxes to the city, but they can vote and might receive city services, depending on the agreements they have struck.

Finally, some Del Valle residents live in what’s known as the ETJ. The extraterritorial jurisdiction is an area drawn around cities that is governed and protected by county officials. Residents of these areas don’t pay city taxes and aren’t subject to city ordinances.

Because of new state rules that make annexation much more difficult and require the consent of residents, the area is likely to remain a jumble of jurisdictions, city services and land use regulations for the foreseeable future.

In the meantime, Fuentes told the Monitor, she’ll be looking at how to make long-overdue strategic investments in infrastructure for a place that’s prone to flooding and burdened with “significant” climate justice issues, yet facing the same intense development pressures as the rest of the region. She is working toward “a more unified, coordinated approach” and plans to meet with fellow southeast Travis County elected officials this month from all levels of government.

“I often say that Del Valle community is the most marginalized of the most marginalized communities because of the nuances in jurisdiction, not having a guiding strategic plan for the area, and having to really address lack of infrastructure from decades of institutional neglect,” Fuentes said. “We’ve come a long way, but given the pace of development in the area, there’s so much more that we have to do. We have to be proactive and we have to have robust community engagement as part of it.”