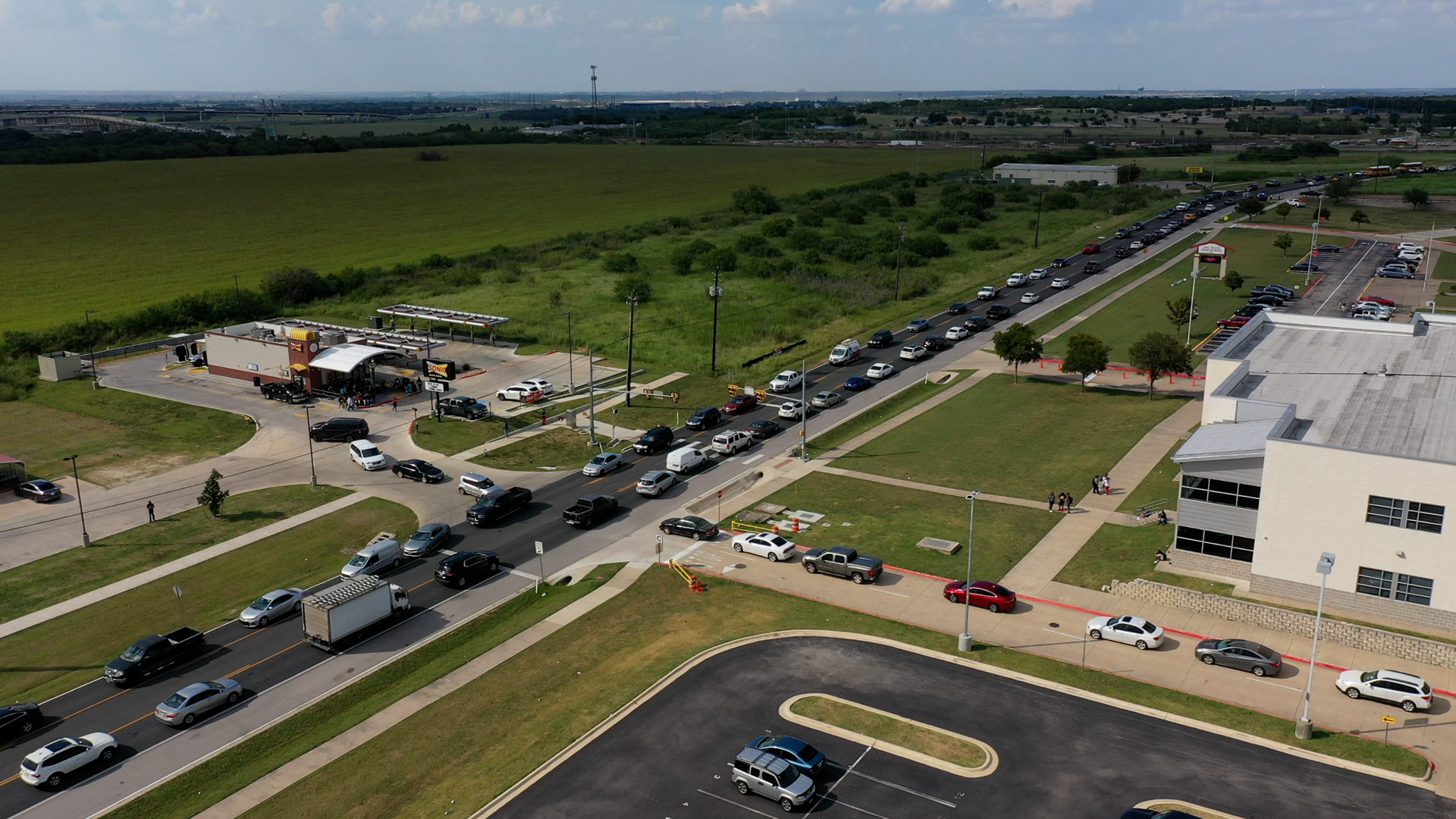 “Del Valle is going to bust wide open,” she says. “Thinkery, ACC, H-E-B and a new apartment complex are set to move to the area.”

Eventually, King knew, the steady growth in Austin would spill over into Del Valle and the surrounding communities. But she also saw an opportunity to channel that tide of construction into projects needed by eastern Travis County residents, things like updated roads, community centers and grocery stores.

“We don't mind the upsurge in development,” says King. “But we want it done right and we would like to have a voice.” 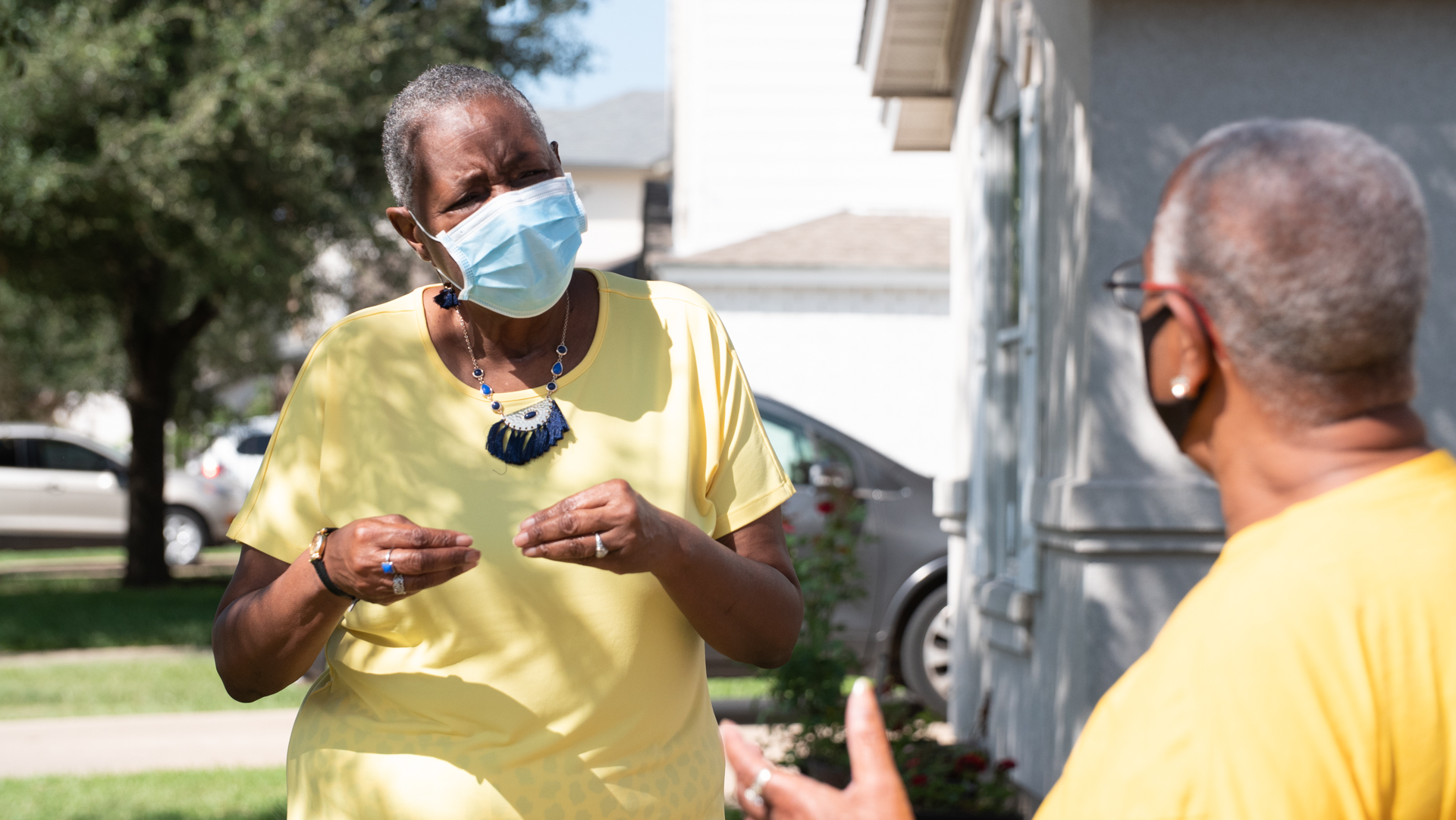 Far Southeast Improvement Association co-founder Patricia King speaks to a neighbor outside her Berdoll Farms home. King stresses the importance of having community members from neighborhoods across eastern Travis County in the group. “There’s power in numbers,” King says. “Everyone can benefit from this.” Photo by Blair Waltman-Alexin.

That’s why King restarted the Far Southeast Improvement Association. The goal of the FSIA isn’t to dissuade companies from coming to the area, nor is it to woo them into staying. King wants to get everyone at the same table – community leaders, developers, county officials and companies – and to make sure everyone knows what residents in this part of the county need.

“We’ve been kind of passed over,” King says. “I don’t know what issues every community faces. That’s why we need them to be at the table, so we know what’s going on. ...There’s power in numbers. Everyone can benefit from this.”

It’s no secret that Central Texas is booming. The latest census numbers mark Austin as the second fastest growing city in the state, the population having increased by a whopping 21.7%. It’s only expected to keep growing as 45 companies from outside the state plan to decamp for Austin. But hemmed in on all other sides, developers are looking eastward towards areas like Del Valle, Stony Point and Hornsby Bend for proposed apartments and industrial space. 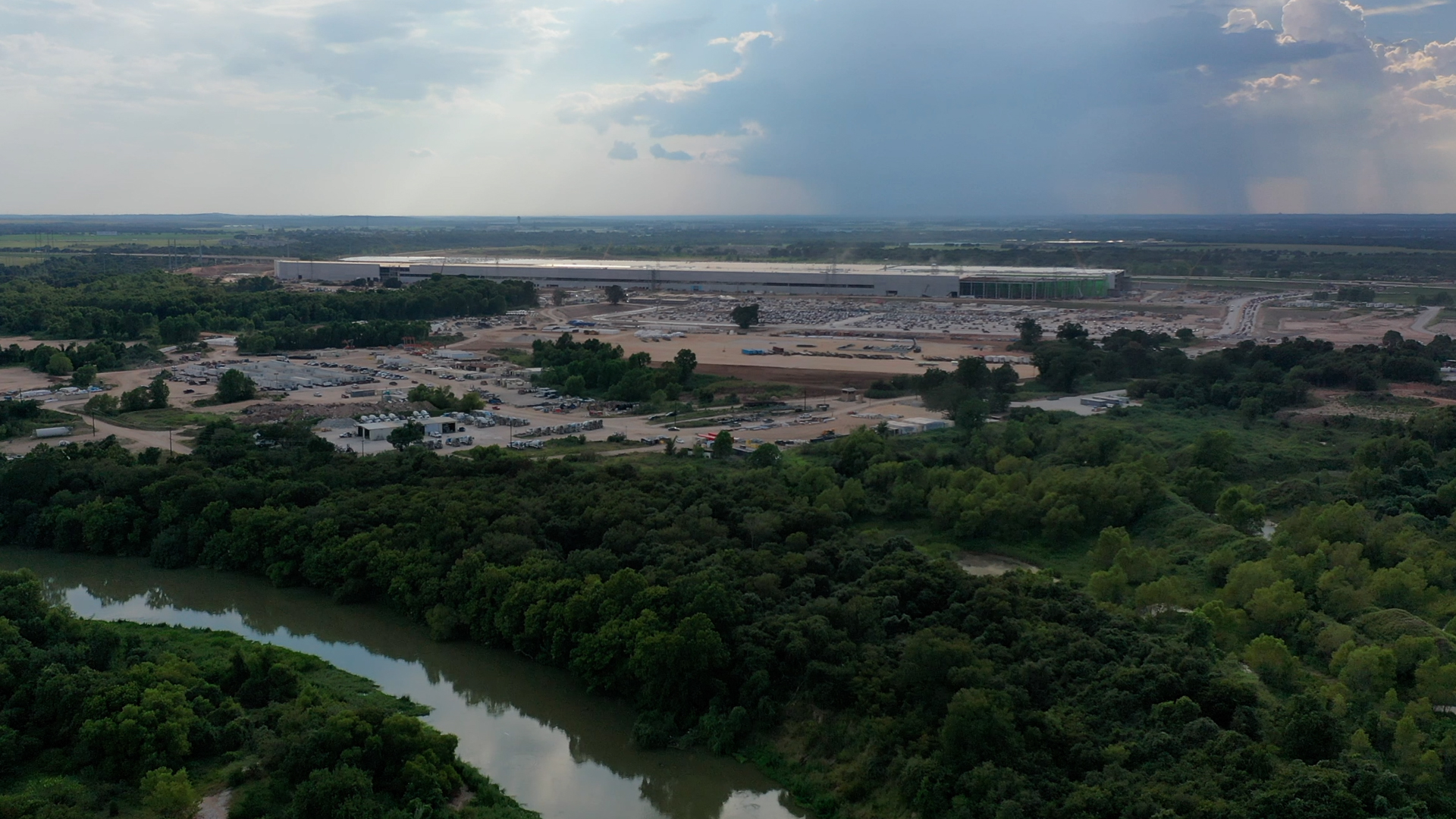 Construction continues on Tesla’s new Gigafactory Texas, set to start production in late 2021. About 45 more companies from outside Texas have announced plans to move to Austin. Photo by Blair Waltman-Alexin.

“Really, we kind of ran out of space, to be honest,” Angie Newman says. She is the vice president of Trio Development, which works in Del Valle. She says initially a lot of construction in Travis County was happening to the west, but between environmental barriers and annexation issues, developers hit a wall. Eastern Travis County holds some of the last scraps of open prairie.

“It's just kind of raw land,” Newman says. “But it's beautiful.”

Raw land can be appealing, but it also means utilities like water and electricity are not in place. Travis County Precinct 4 Commissioner Margaret Gómez can remember when Del Valle farmers had to have water delivered to them via truck.

“It was totally rural,” she says.

Residents don’t have to check the cistern anymore, but there are still areas that fall into service gaps.

“I understand the frustration that they feel because they see parts of it already annexed [by the city of Austin] and they get water and wastewater,” Commissioner Gómez says. “[They’ll say] ‘Well, why don't we?’ Well, because you're still in the rural area of Travis County.”

Land development can start the ball rolling on expanding services. Developers building an apartment complex on land that’s not annexed by Austin will strike deals with private companies to add water lines or electricity. But bills from private companies can run high and oversight can be difficult. Hornsby Bend resident Tina Byram, like the rest of her neighbors, gets her water through SouthWest Water Company, a private supplier for their community. She says she spends $300 a month on drinking water in addition to her family’s average $150 monthly water bill due to quality concerns. Those concerns were underscored last December when a well incident at nearby Austin’s Colony left residents with orange water for a week. SouthWest Water Company stated that water was tested and was safe, but concerns still linger for some residents.

Byram has been advocating for improvements in her community, including water access and a petition regarding Tesla’s management of a road expansion project. But she jumped at the chance to join the FSIA, seeing it as an opportunity to get the attention of the powers-that-be, and to coordinate with other eastern Travis County residents about the future of their hometowns.

“We don’t plan on the infrastructure for growth, that’s my biggest concern,” Byram says. “We’re so spread out we don’t know each other’s issues. ... I think this is just bringing all the community leaders to the table.” 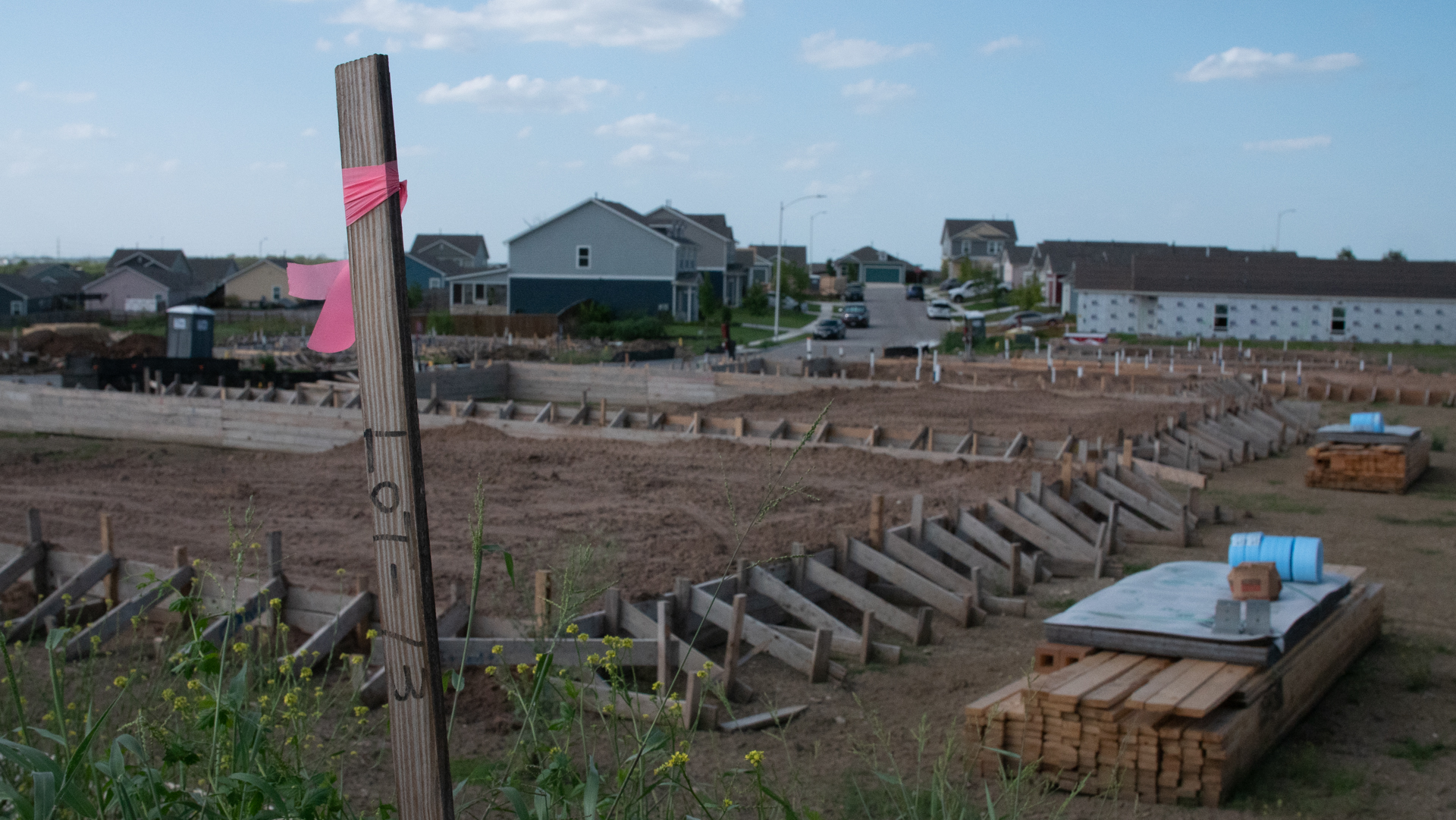 Construction begins on homes in a new housing development in eastern Travis County. It’s one of the few rural spaces left in the county, making it appealing to developers looking to build out areas for the booming Central Texas population. Photo by Blair Waltman-Alexin.

Enrique ‘Henry’ Cantu is familiar with gathering community leaders in order to push for community improvements. He advocated for public transportation in Del Valle, helping create what eventually became the 271 Del Valle Feeder route. But over his 19 years here, he’s also seen new housing developments crop up without thought for how public transportation would access the area.

“The current bus route ... the bus cannot go into the streets because they’re too small,” Cantu says. “We need to think about that before they start building homes.”

Cantu sees the growth in eastern Travis County following a pattern he’s seen in other areas like Slaughter Lane and Mueller, and within that growth an opportunity for change.

“That can happen here too. And it’s happening,” Cantu says. “I’m excited. We want to get ready for that so ... they can hear our voices, our concerns, and be part of the growth in Del Valle.”

For her part, King is focused on two things that many residents in Del Valle want to see: a community center with programs for children, and a long sought after grocery store. One of those might be coming to fruition. Previously named Velocity Crossing, the area now rebranded as simply Velocity will soon be building offices, light industrial space and apartments at the intersection of State Highway 71 and FM 973. The project could add enough potential residents to meet H-E-B’s population benchmark for setting up shop. The grocery store chain bought part of the land in 2016 but has yet to announce plans to build a store.

In the meantime, King is inviting anyone interested in joining the FSIA to come to the table. She’s looking for buy-in not just from community members, but from developers, companies, and county leaders. She’s gearing up for their first public meeting on Sept. 23. But more than anything, she wants Del Valle and the surrounding towns to form a plan.