In the Austin pre-dawn light, the traffic lights blink yellow. The normally traffic-snarled roads are empty except for one parking lot on Fifth St., where Porfirio “Pete” Rivera and dozens of others are starting their shifts for the day. Rivera makes his way through the rows of long blue vehicles, searching.

Rivera has been with Capital Metro Transportation Authority, or CapMetro, for over 30 years, working both as a trainer and a bus operator. It’s given him an encyclopedic knowledge of Austin’s interweaving routes. 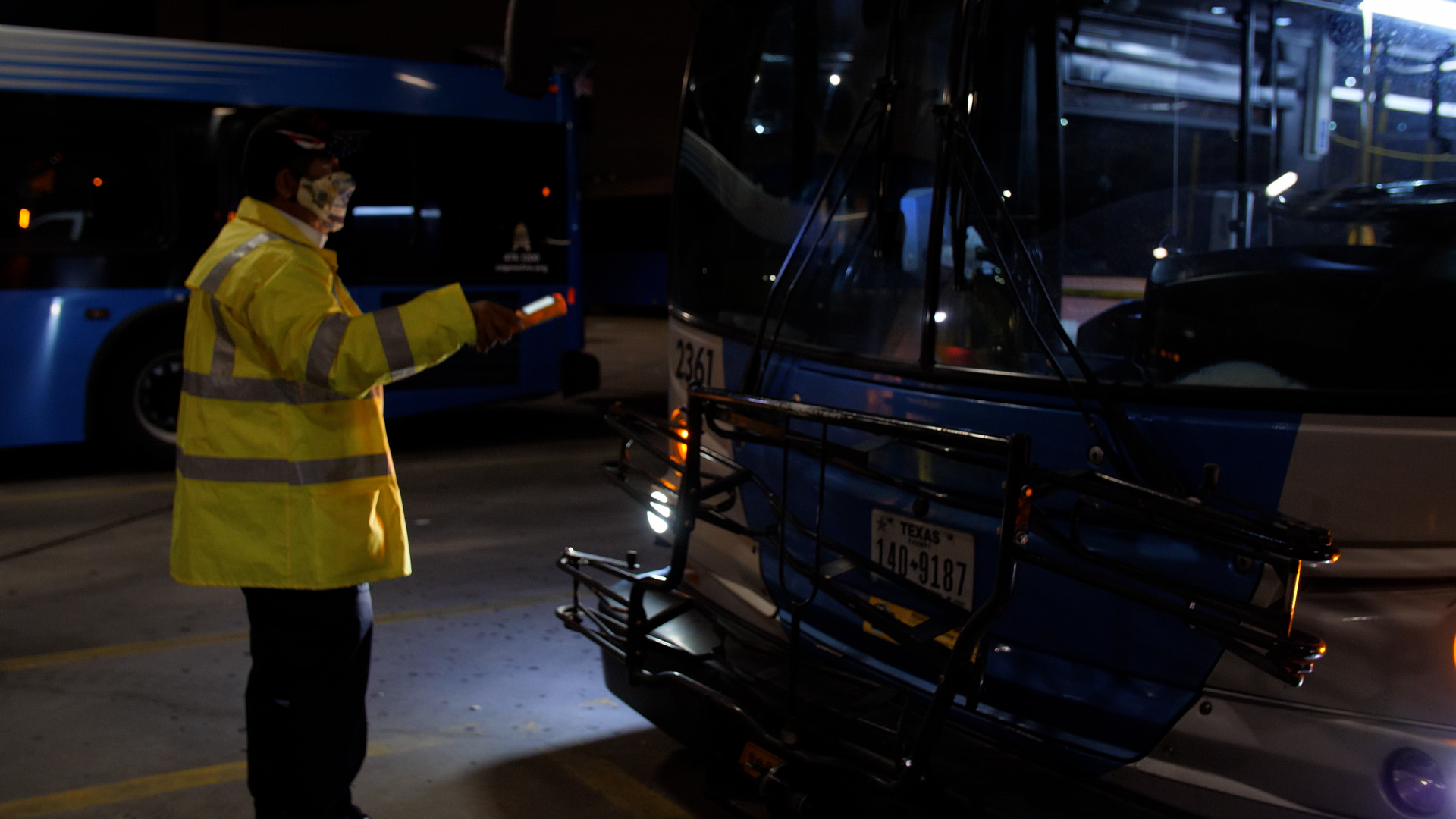 The 271 is the Del Valle Feeder, the only bus route that serves the Del Valle community. About 45 minutes from start to finish, it stops at the Del Valle High School and the Child Development Center, before looping through the Travis County Correctional Complex and ending at the intersection of Grove Street and Riverside Drive in Austin. And it's a route that’s become increasingly necessary. In the last decade the Del Valle area has grown an estimated 22%. In 2018, ridership for the 271 roughly quadrupled.

“You get a lot of folks,” Rivera says.

Public transit in Texas has gone through lots of peaks and valleys in the past few years. Ridership numbers across the state were trending downward, but CapMetro reported an 11.5% increase in ridership from 2018 to 2019 after it overhauled routes under Cap Remap. But then Covid arrived and ridership dropped about 60%.

Still, Austin voters approved a proposition to fund Project Connect last November. The initiative will add light rail and expanded bus routes to the city’s transit system. While one of the light rail lines will extend into Del Valle, it will run to the Austin-Bergstrom International Airport. As of now, no additional bus routes are being considered for Del Valle. 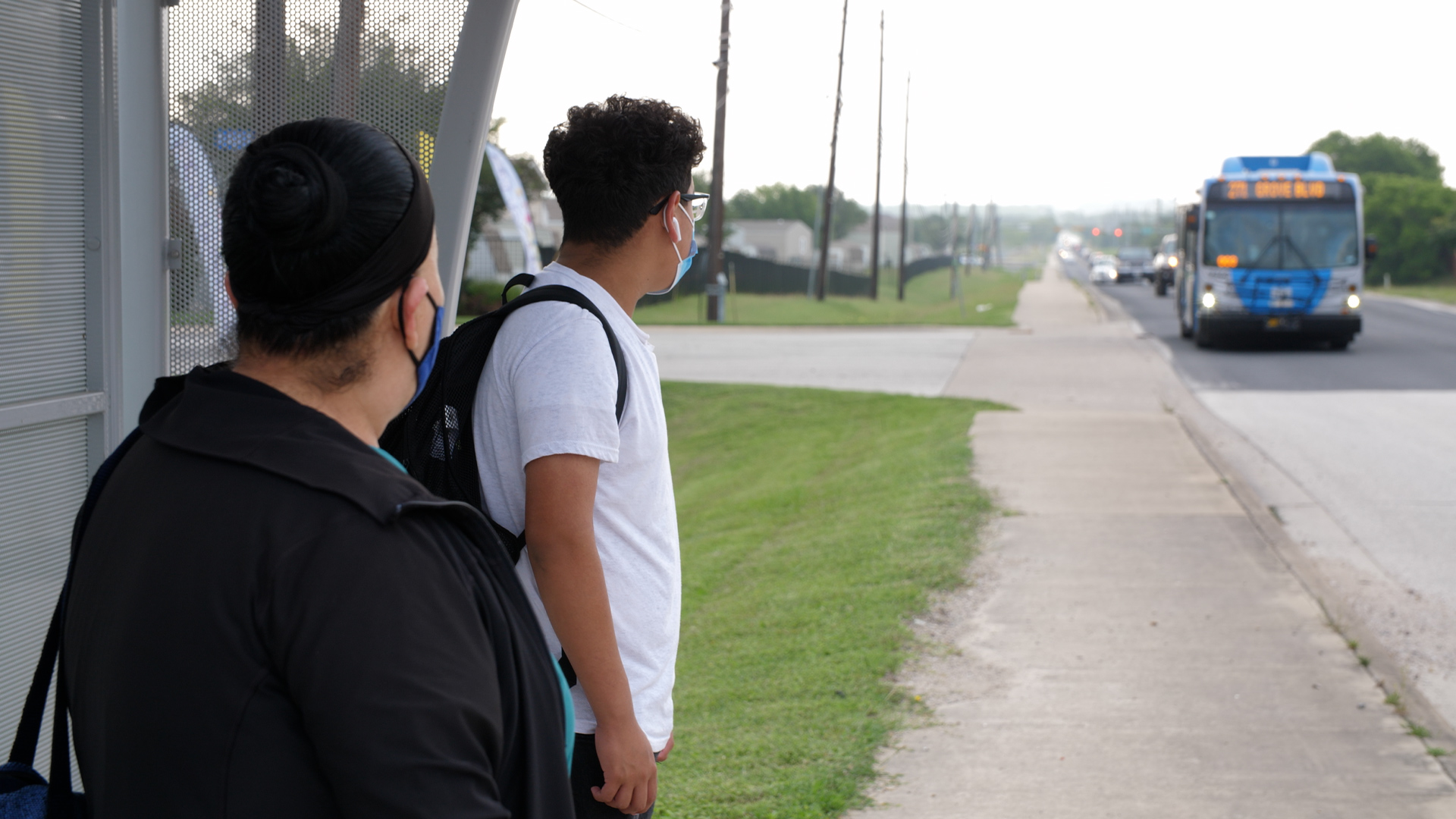 A young man and a woman wait for the Del Valle Feeder at a bus stop in Del Valle. It’s the only bus route that serves the Del Valle community.

“Once we get too deep into the Del Valle neighborhood, we actually leave the Capital Metro jurisdictional service area,” says Dottie Watkins, the chief operating officer for CapMetro.

Watkins points out that CapMetro is primarily funded through sales tax collected in its service area, including Austin and some unincorporated areas in Travis County. Those dollars are constrained to the CapMetro service area, but CapMetro can coordinate with partners in the area on projects that use federal funds, like Project Connect. Watkins says they have identified eastern Travis County as an area of high potential growth, and they have mobility plans in mind for the area.

But some of that growth in areas like Del Valle may be coming from people being priced out of the Austin city limits. It highlights a public transit dilemma cropping up in cities everywhere. While those who use public transit tend to be immigrants, people of color and people under the age of 50, those same groups are seeing drops in ridership as they are pushed to areas with fewer transportation options. It’s an issue that’s been on CapMetro’s mind as they start to roll out Project Connect. About $300 million of the initial investment is earmarked for Anti-Displacement Investments, which will include affordable housing along Project Connect routes.

But cost of living remains an issue for those in the Austin area. Rivera says since starting to work the 271, he’s run into people he used to pick up in Austin on his old routes.

“You get your regulars every day and when you don't see them for a while, it worries me,” says Rivera. “Now that I drive out here, I get to see him. And I said, well, now that's where they went.”

Rivera describes those regulars as folks at the beginning or end of their day: women who work at hotels near the highway, students on their way to school, or residents from Austin Transitional Center going to work at Goodwill or Salvation Army.

“I know where I pick them up, and I know where they get off,” Rivera says. “Sometimes they'll say like,’Oh man, I'm really tired. So you know where my stop is in case I fall asleep.’ I said, ‘Yeah, I know. ... I'll leave you off there.’”

Rivera tries to let everyone know if he’ll be out on vacation, so passengers won’t worry and so they’ll get to the bus stop a little early. José S. Romero is a fellow bus operator on the 271, whom Rivera trained when he started working for CapMetro 30 years ago. Romero says Rivera is the standard bearer of the route. 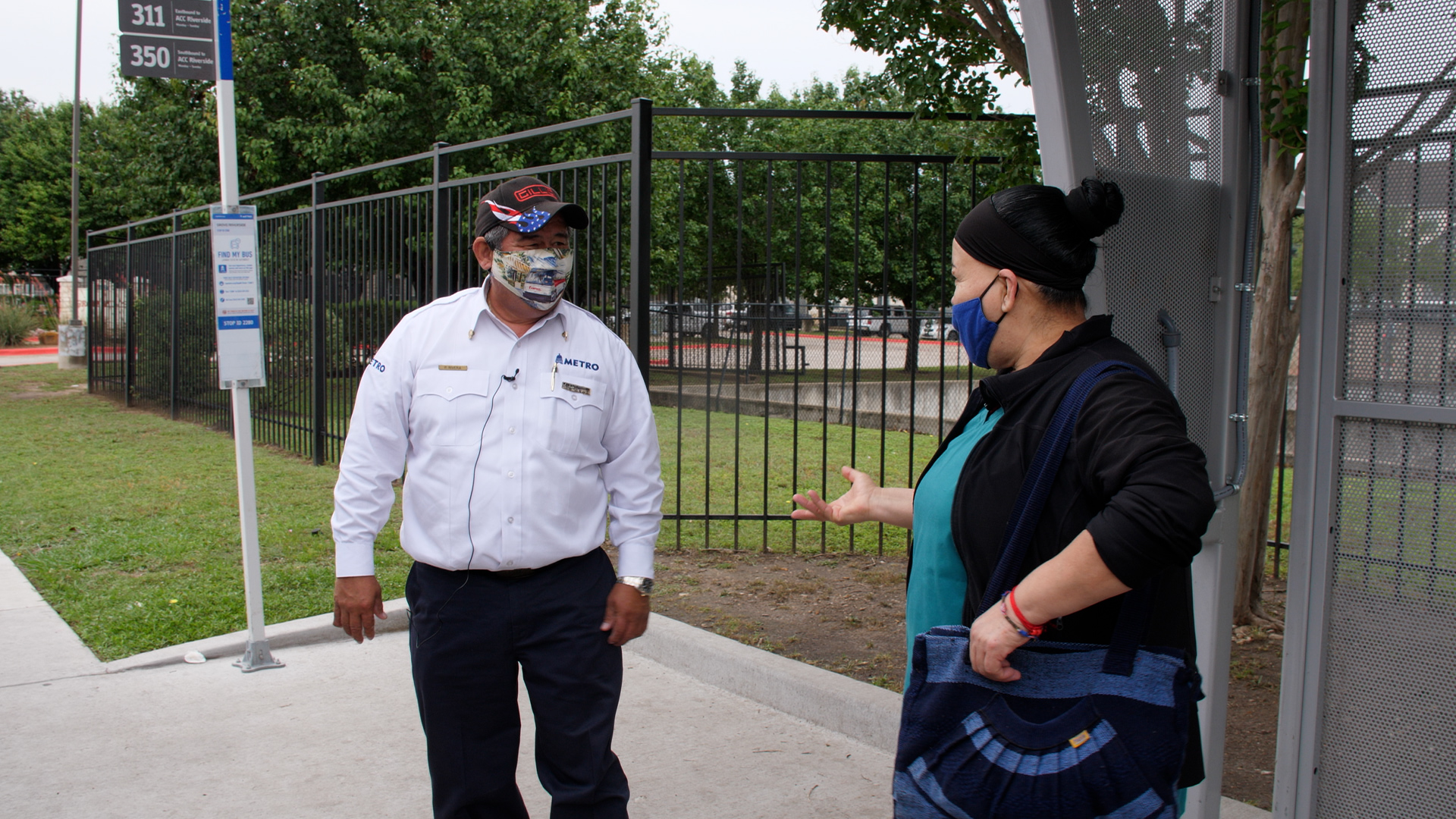 CapMetro Bus Operater Porfirio “Pete” Rivera chats with one of his regular riders at the end of the line at Grove Street and Riverside Drive. For Rivera, his regulars have become a kind of family.

“He connects with everybody,” Romero says. “He’s great.”

Rivera says people on his route feel like they can open up to him. He’s a constant in their day, a friendly face that, for a few stops, they can joke with and share their concerns.

“I'm not no, like what would you say, like a psychiatrist or nothing like that,” Rivera says. “But I … try to help them out as much as I can.”

Transit will continue to be an issue for the Central Texas region for the foreseeable future, with high-level decision making that will impact disparate communities on the outliers of Austin. But for Rivera, it’s not a question of growth predictions or future route maps. It’s about the person stepping on his bus today, and how he can get them where they need to be.

“A lot of the folks, they lift up my spirit,” Rivera says. “Everytime I see them, it’s like seeing a family member. And that’s why I stay on the same route. … I’m going to stay as long as I can.”