It’s quiet in the tucked away corner of Del Valle Maria Hayes calls home. When she steps outside, she’s met with just the sounds of country life: dogs barking and cows walking the fence line. That is, until she fires up her tractor.

“You get on the tractor. Nothing else matters. You just ride around the pasture, cutting grass. It's actually very cool,” Hayes says. “We like being kind of secluded, but that's going to change.” 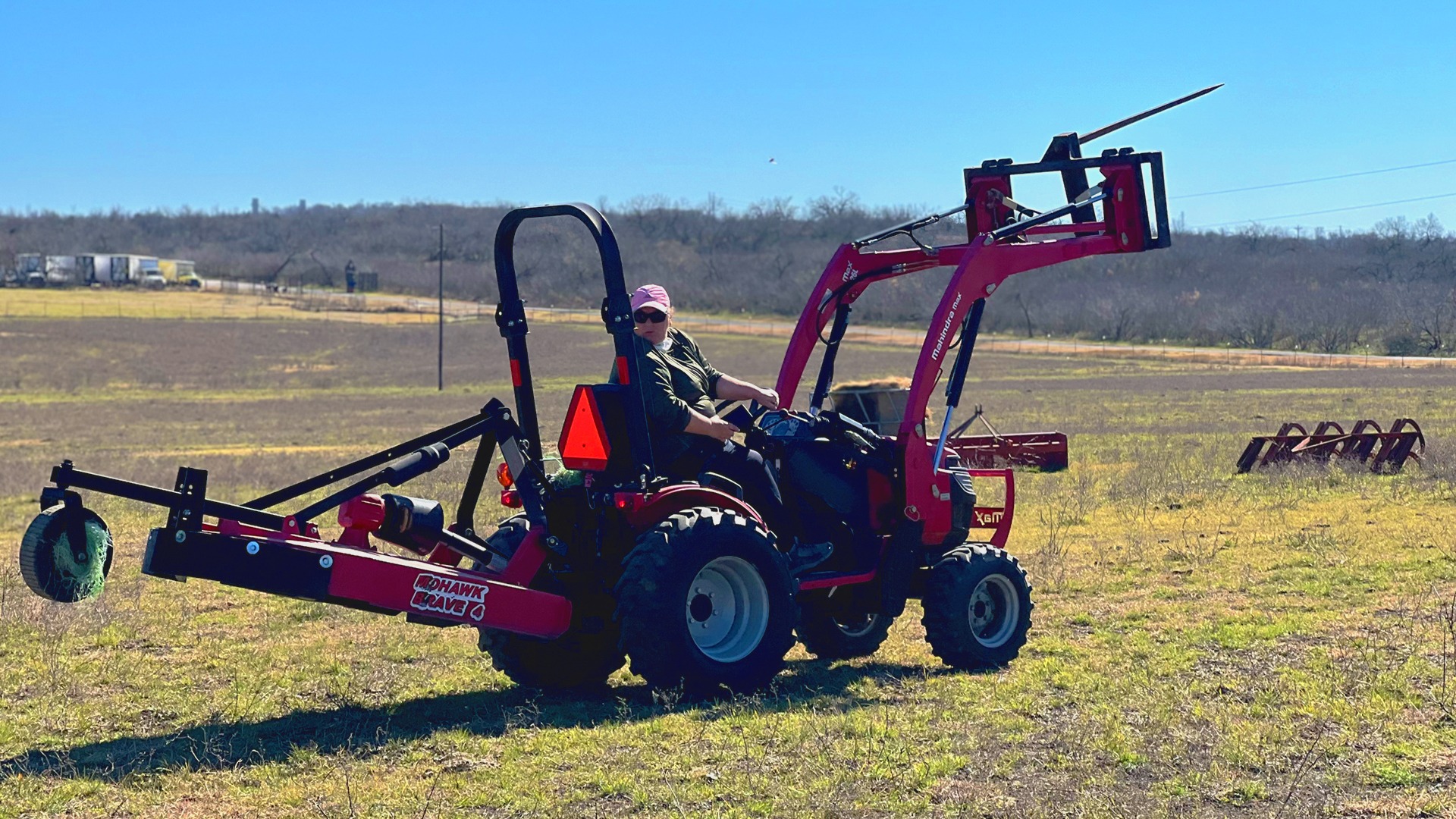 Maria Hayes backs up her Mahindra tractor after placing a bale of hay in a feeder at Bikhers Whale Ranch on January 13, 2022.

The same open space in Southeast Travis County that has attracted ranchers like Hayes for years has now attracted developers. These changes drive up housing costs in Del Valle from urban to rural communities. Residents face tough decisions as encroachment makes it increasingly difficult to stay.

“I guess it's a lot like the East Austin people that sold their property for three times what they bought it for, but then to go where?” Hayes says. “We're not going to be able to find what we have … at any price point we can afford.”

Hayes moved to Del Valle from Ohio in 2016 with her wife, China Widener when they relocated for Widener’s job. They found Bikhers Whale Ranch, just off of Wolf Lane, while shopping for a home. 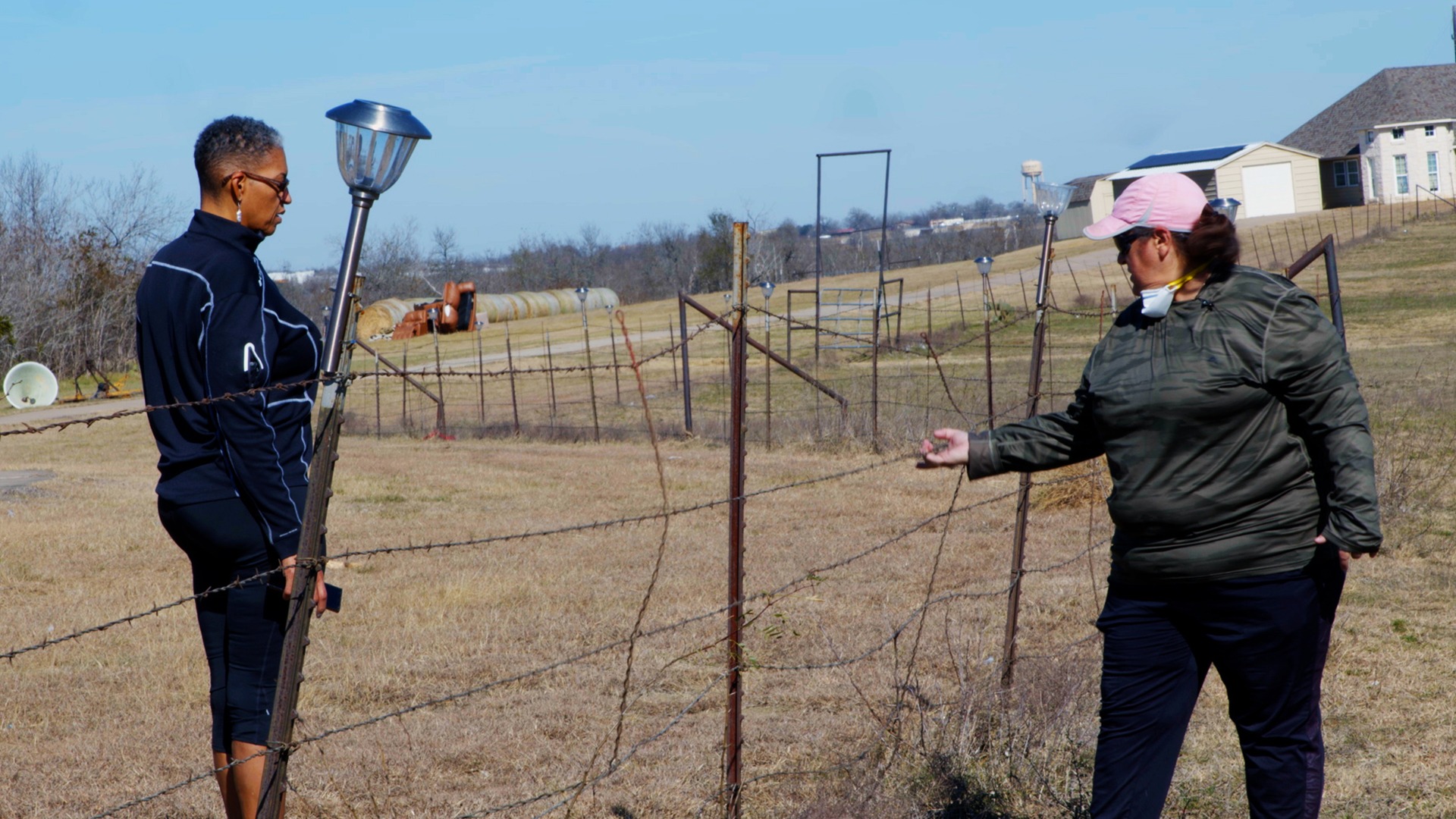 Maria Hayes (right) and her wife, China Widener (left) discuss fixing part of their fencing at Bikhers Whale Ranch on January 13, 2022. Their herding dogs chased some of their cattle through the fence, damaging it.

“Never in life did I think, in my 50s, I'd be on a tractor most days and rounding up cattle to brand them and to give them shots and all that kind of stuff,” Hayes says.

Hayes hoped to one day expand the herd but skyrocketing property values made it impossible for them to afford new land. According to Texas A&M University Texas Real Estate Research Center, the Austin-Waco-Hill Country rural land price per acre increased by 30.01% in the third quarter of 2021.

“I think we got in at just the right moment,” Hayes says. “I think right now, if we were trying to get into this property, we'd never be able to get it. The price would just be way too high.”

Rural land price increases are also a concern for Hayes’ neighbor and fellow rancher, Paul Viktorin. He currently leases the adjacent 150-acre property, raising about 25 cattle. The land is now up for sale and once it's sold, he’ll have to relocate. Since land is increasingly becoming less affordable, he might have to sell his herd instead. 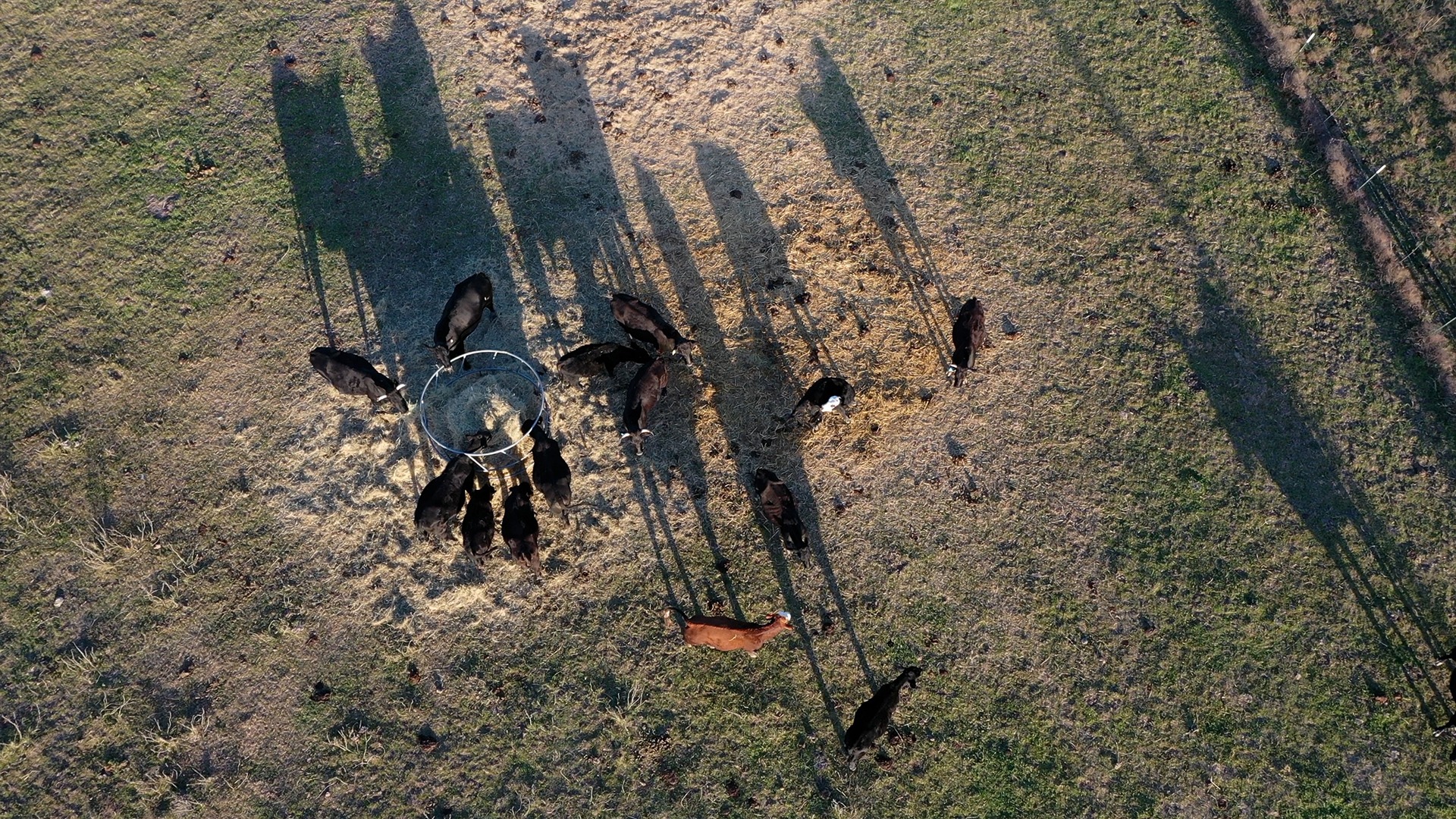 Maria Hayes’ herd graze on hay in a feeder at Bikhers Whale Ranch on January 13, 2022. Hayes and her wife raise 16 cattle, a donkey, a mule and three chickens.

“It's a sad deal when you have to do that,” Viktorin says. “You hate having to sell because it's always hard to get back into it, once you get rid of all your cows.”

Both Viktorin and Hayes looked into buying parts of the property but it's out of their price range. Hayes says the land will most likely be sold to a developer.

“That’s kind of the thing that is a little disappointing about the growth. Just the fact that we're going to lose all this land,” Hayes says. “That's what Texas is all about, right? Ranches and cows.”

It's not just ranchers struggling to stay in the area. Community members in the more urban parts of Del Valle face a similar issue. Heather K. Way is co-host of The Uprooted Project, an initiative created at The University of Texas at Austin addressing displacement in gentrifying neighborhoods.

“Unfortunately, it's becoming harder and harder in many communities throughout the state for families to have access to just a basic, safe, decent, affordable residence,” Way says.

The Tesla GigaFactory, Circuit of the Americas and the Velocity mixed-use development are just a few examples of changes to the Del Valle area. Way says while growth like this will create jobs, it will also attract more people.

“Which then is this ripple effect on property values, rents, property taxes,” she says.

According to Way, rising property values and taxes weigh heavily on residents of Del Valle because many do not have financial buffers to offset increases. Real estate company Orchard reported a 39% increase in median home sales price in Del Valle from 2020 to 2021. As housing prices increase, those already living there can’t afford to stay.

“As an area picks up in the market where there's more interest in developers coming in and building and tenser development, that results in increases in land prices,” Way says.

People of color are particularly vulnerable to displacement due to systemic racism in the housing and financial systems. According to the Center for American Progress, exclusion from federal home ownership programs has resulted in only 41% of Black households owning their home, compared to 73% of white households. The same study found Hispanics or Latinos have similarly low home ownership as Black households. Del Valle is home to an estimated 77% of residents who identify as Hispanic or Latino and an estimated 7.4% who identify as Black or African American. 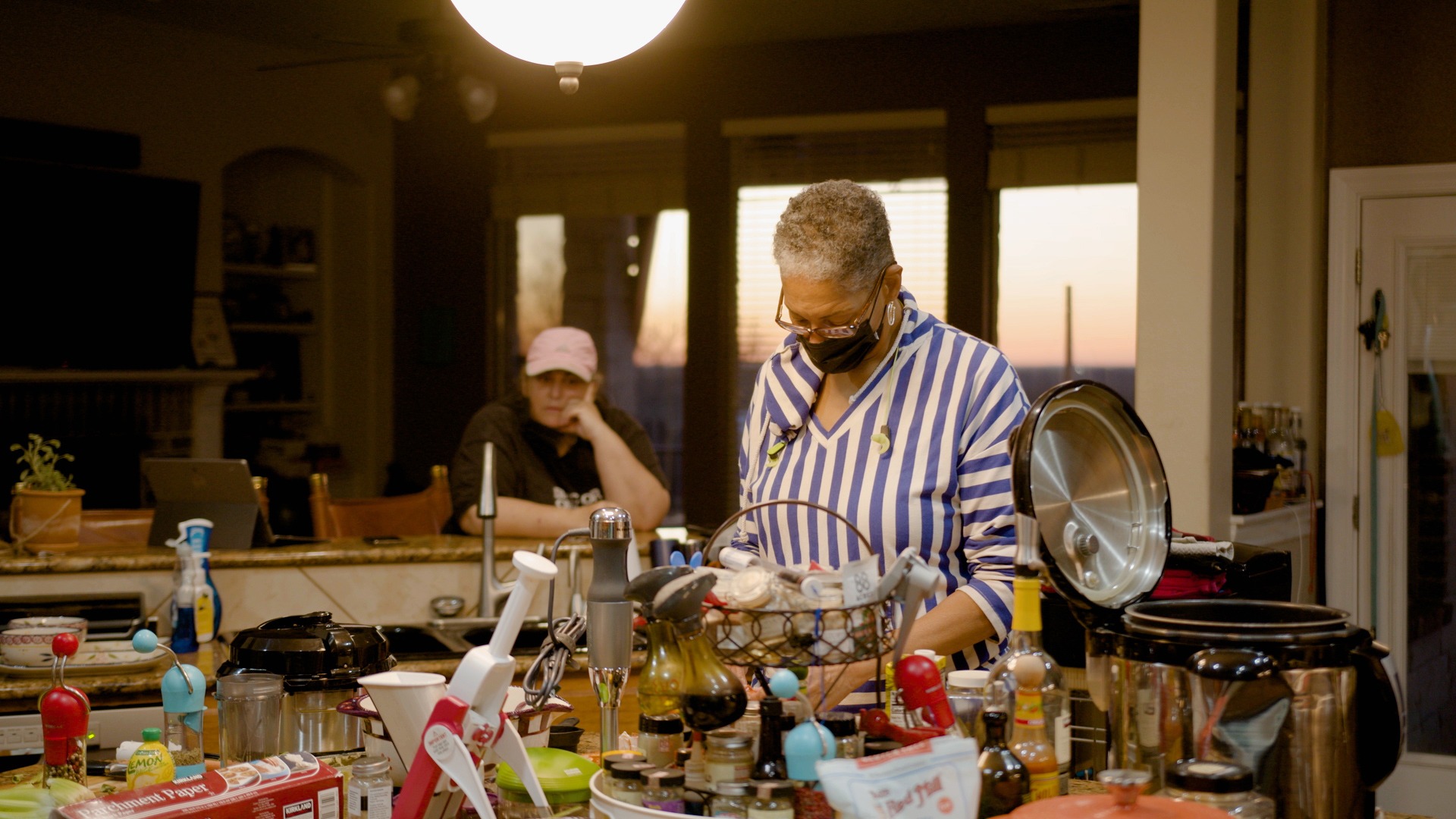 Maria Hayes (left) talks to her wife, China Widener (right) as she cooks lobster bisque at their home at Bikhers Whale Ranch on January 21, 2022. The couple often enjoy dinner with sunsets in their backyard.

“When you look at groups who are the most at risk for being displaced and to experience ripple effects that come from displacement, persons of color are definitely ranked very high in terms of the impacts,” Way says. “Because they have just little … in the way of economic buffers and safe social safety nets to be able to offset the impact of being displaced.”

It’s not just Del Valle home values that are skyrocketing. Much of Central Texas is experiencing growth and home price increases, so even if residents are forced to sell their homes, there is no guarantee they can afford to buy a home somewhere else.

“There are not a lot of options and this is what is especially challenging and I think just can be really discouraging too,” Way says.

For the moment, Hayes can afford the high tax increases but as growth continues the future is uncertain.

“There's not a whole lot we can do,” Hayes says. “We're just going to stay here and see what happens.”