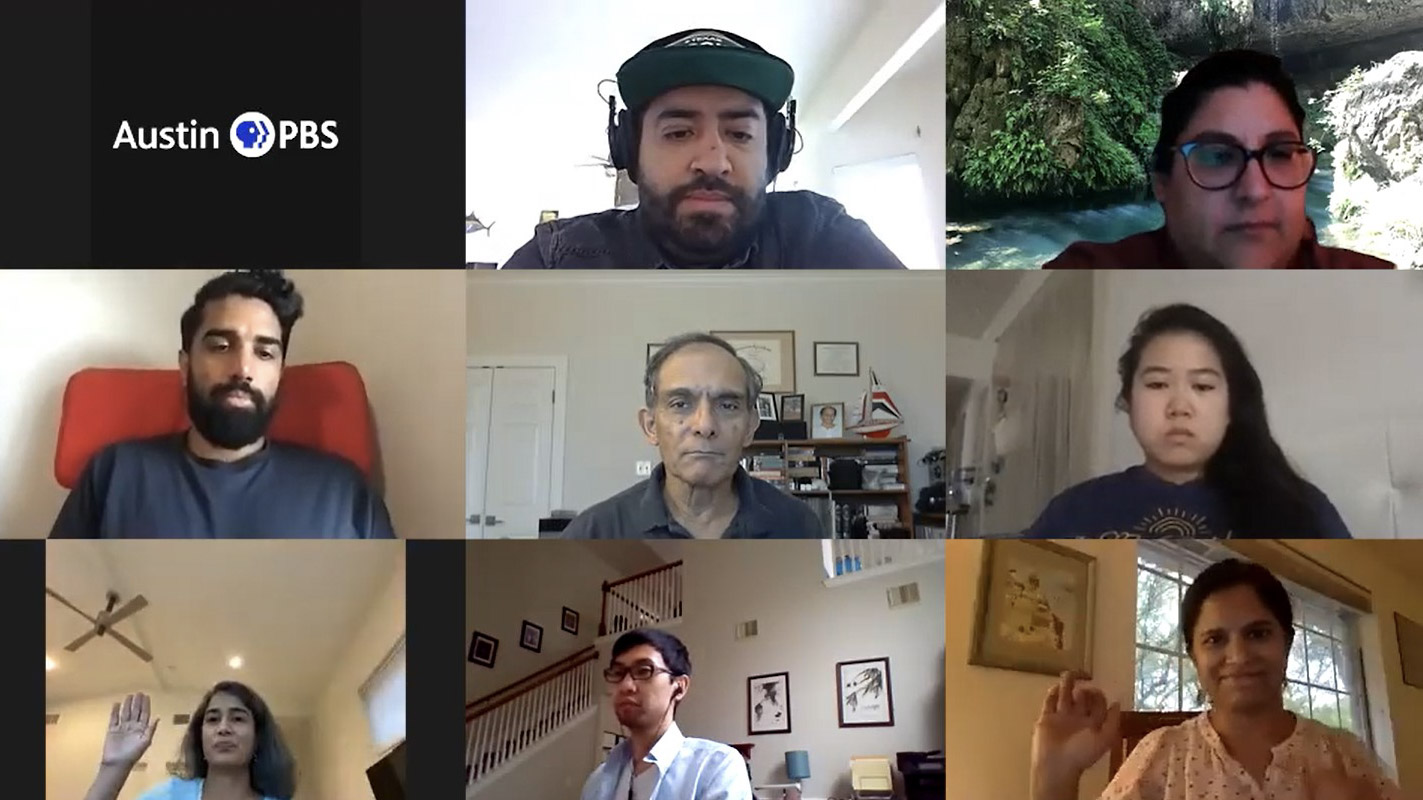 We Hosted Our First Community Conversation. Here's What We Learned

Decibel is focusing on the Asian American community for our first reporting project under our new mission. Under our new mission, no reporting can begin without first getting input from the community we are covering. We held a conversation in September to get feedback and story ideas that would guide our election coverage.

Before sending out invites, we had to determine what we wanted this conversation to look like. We decided to assemble a smaller participant group to ensure there was enough time for discussion. We also wanted to make sure we left the conversation with insight that would guide our election stories.

Organizing this event during a pandemic while working fully remote was a major factor in how we set up the conversation. The discussion came together as a Zoom meeting, with all five Decibel staff members serving as moderators for our invitees.

Our list of attendees was comprised of reporting contacts from our story earlier this year on the Asian American community’s outreach for the 2020 Census. The Asian American Complete Count Committee has begun shifting their focus to voter turnout efforts, which is why we thought they would make a good partner for our first event. We also invited members of our Austin PBS Board of Directors and Community Advisory Board. In an effort to keep the conversation small, only 25 people were asked to participate, 11 of whom joined us.

Once we had everyone in the session, Decibel’s Executive Editor Sam Guzman led introductions and outlined our goals for the discussion. The plan: work on four pieces for our voting coverage. One piece will be a montage featuring Asian American voters sharing their thoughts about the upcoming election. The other three pieces will be news documentaries. Before jumping into the main discussion we asked for questions.

One participant asked how we were choosing our contributors. “How are y’all finding a lot of the community leaders, because I’m not seeing other people that I would think to be here?” We explained our invitation process and agreed we want and need to do better with each future event. This kind of feedback was encouraged from all attendees to fine-tune our community outreach.

In terms of demographics, we had an evenly distributed mix of age groups represented in our conversation and gender was pretty evenly split. About 55% of our guests were male and 44% of our guests were female. However, we definitely need to work on the diversity among guests. Most participants reported identifying as having Indian heritage, which means there are voices in the community that weren’t represented.

We began our main discussion with a poll. Attendees were asked, “How would you rate the news media’s coverage of the Asian American community?” About 50% of respondents rated the coverage average, 30% rated it fair and 10% rated the coverage poor. 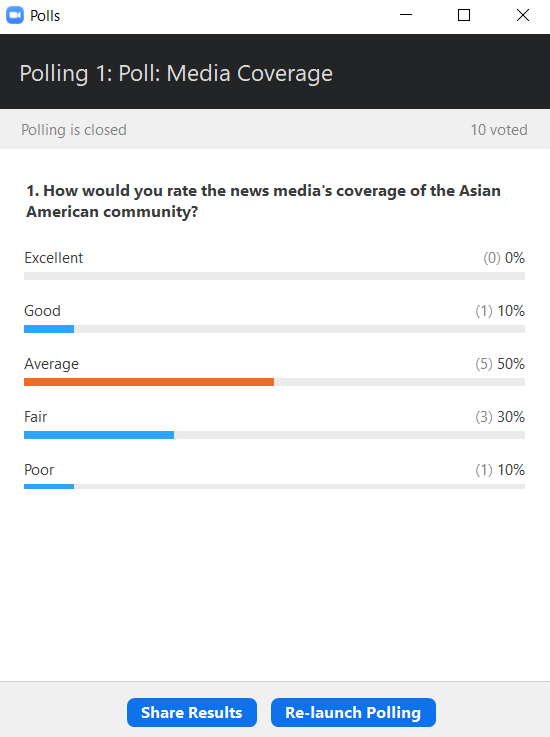 The Decibel team used the poll results as a jumping-off point for a deeper conversation on news media coverage of the Asian American community. A major point made by multiple guests was that Asian Americans are not monolithic. One participant drilled this down further and asked us to be careful when using the term “Asian bloc.” He told us the Asian American community contains more than 40 countries that contain hugely diverse cultures, and when spoken about in general terms, it devalues the contribution of the people who are here. He also said you could spend a lifetime telling the stories about people in this community.

A question we posed was how do we highlight this diversity when we are currently working on only three stories. The simple answer from our guests: do more than three stories. The need to highlight generational differences between members of their community was also stressed. Another point was to talk to Asian Americans about all issues, not just when a particular news item seems important to their community; this is the fastest-growing racial demographic in the state and their voices deserved to be heard on all topics.

After talking all together, we broke into two mini-sessions. Two Decibel staff members and five to six guests then spoke more specifically about voting. In the breakout rooms we asked the following questions:

Guests shared that the pandemic has affected many Asian-American businesses and racist rhetoric like the “China virus” has made things harder for members of their community. They also noted how many Asian Americans are running for office. When we asked for specific people we should highlight in our stories, one person suggested a local teenager who has been phone banking. That story, born of this conversation, will be released in a few weeks.

The hour-long event ended too soon. We walked away with two story ideas but felt we needed more conversations for longer periods of time with community members in the future. Following the Zoom meeting we sent out a thank you email with a survey on how we could improve future conversations. More than 64% of our guests rated the overall discussion as good. However, we saw a slight dip for the breakout sessions. About 50% of the guests rated the breakout sessions as excellent.

Some of what people liked best was hearing other’s perspectives, knowing that they were being heard and that their concerns were being taken seriously. One participant’s least favorite part of the conversation was that it wasn’t long enough.

The takeaway for the Decibel team was to continue our mission to listen to and have conversations with the communities we cover. We don’t want to just post our articles and move on; rather, we seek to build relationships that result in dynamic and authentic storytelling.

Next month we plan to have a post-coverage discussion to get feedback on our reporting. If you are a member of the Asian American community in Central Texas and would like to be included in the next conversation, please email us at news@klru.org. 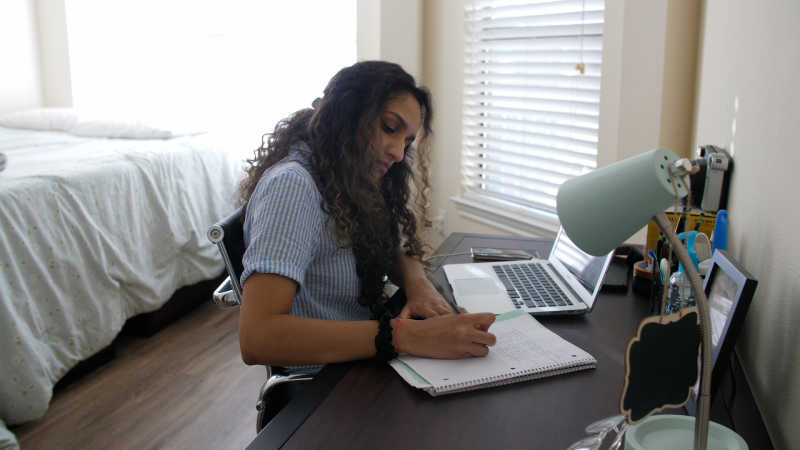 A Light In The Dark 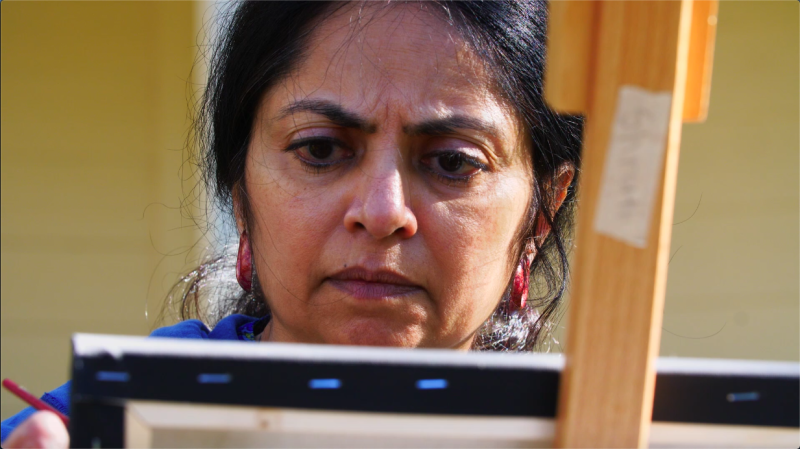