Sien Zhang and her family were preparing to celebrate Lunar New Year when the lights went off.

“We were joking, ‘Oh it’s such a special New Year you have to cook in the dark and serve everything with a candle light, kind of romantic,’” Zhang says. “For me I was prepared enough because … in the past few years, even a trickle of rain, it’s just gone.”

Zhang was among the more than 4 million Texans who lost power during the winter storm. But for her and her fellow Great Hills neighbors, their outages began days before the rest of the state was plunged into darkness. Residents of this Asian American enclave say power outages in the Great Hills community isn’t a problem that’s only weathered during severe storms.

“We call it a year-round problem up here,” Pooja Sethi says.

Sethi is a commissioner with Austin’s Asian American Quality of Life Advisory Commission and a community organizer. After the storm, she created a Facebook group called Fix the grid! (Northwest Austin) so neighbors could pool expertise and organize an effort to get answers from Austin Energy.

“We want a plan,” Sethi says. “We want to know what action steps are being taken.”

In a report given to the Fix the grid! group, Austin Energy said that there were nine outages in the Great Hills area in 2019 and 17 outages in 2020, the majority of which were caused by vegetation. Outages ranged from a flickering of lights to hours without power. The average outage, lasting at least a few minutes for all Austin Energy customers was less than one for fiscal year 2019.

Vegetation combined with ice caused the Great Hills area to experience outages four days prior to the blackouts mandated by the Electric Reliability Council Of Texas. Frozen branches fell across lines or sagged into them, causing hazardous conditions for work crews.

The volume of greenery was also a problem. Austin Energy also stated in its presentation that trees in the area had not been trimmed in 10 years. When asked why vegetation had gone unmanaged, Austin Energy said in a statement that previous standards made it difficult to keep up with line clearances. Additionally, they said some residents were not always in favor of the trimming work plan, which complicated work schedules.

“Austin Energy staff needed additional time to work through all options to ensure the safety and satisfaction of multiple stakeholders,” they said in a statement to Decibel. 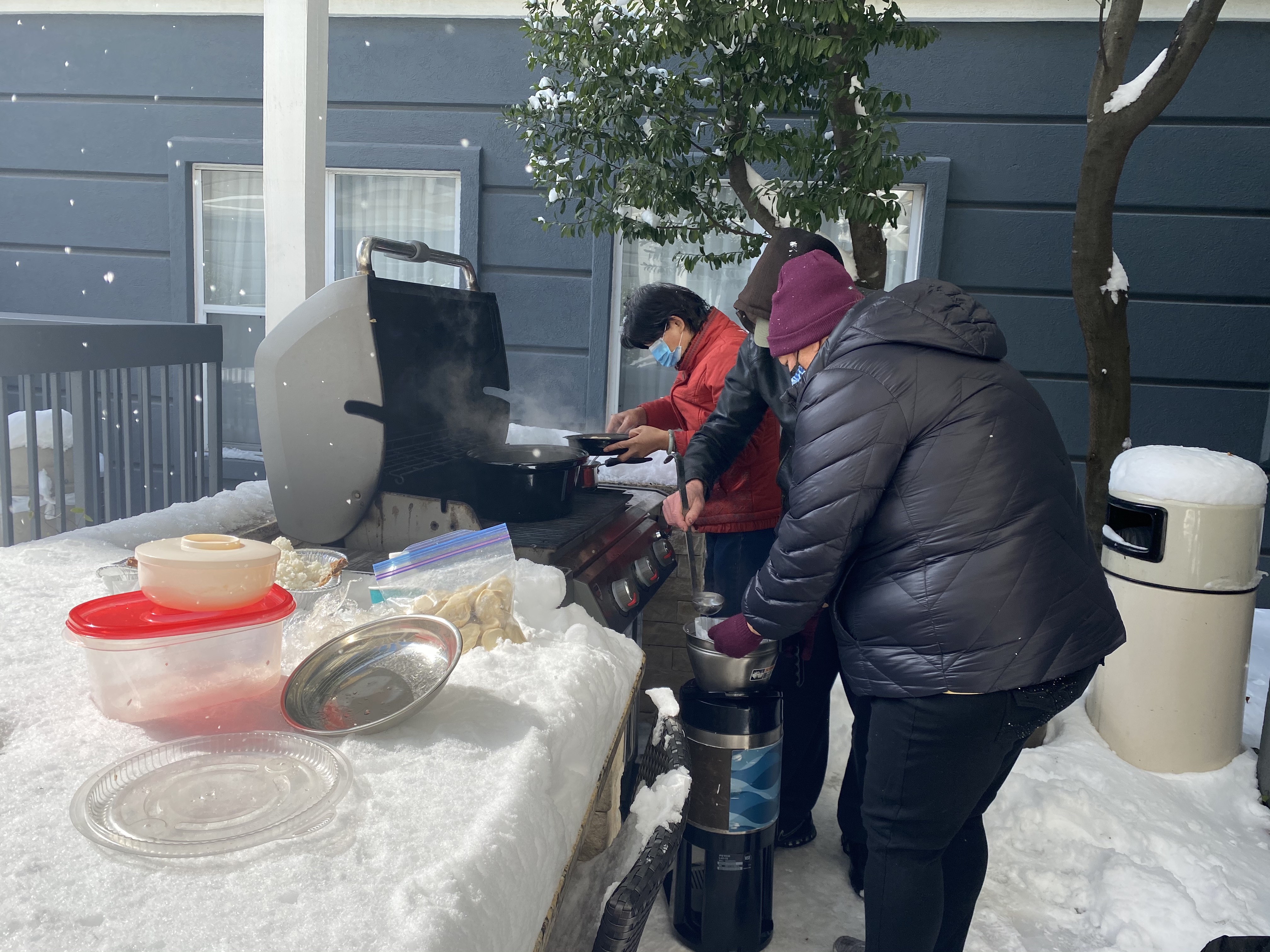 Shelley Xie and her family cook on a grill outside in the snow during the February winter storm. Xie says her son has specific dietary restrictions, which made cooking and eating even more difficult during the power outage. Photo courtesy of Shelley Xie.

“Is there a reason this particular neighborhood takes so long to get power back?” Xie says. “That’s my biggest question.”

During the winter storm, the hilly streets and icy conditions kept most people trapped in the neighborhood. Families abandoned areas of their homes that got too cold, some rooms dipping below freezing.

“We looked at the thermometer we have, it’s about 30, 32 degrees,” Pohlim Davoli says.

At first her family was confident they could weather the storm using their camping gear to cook food, but as the outages continued, they began to worry the butane canisters would run out.

“You really live day by day at that point,” Davoli says. “It’s a little scary.”

Some residents attempted to go to nearby hotels that still had power, but the neighborhood’s rolling hills made the area almost impassable. Sethi’s son broke his leg earlier this year and was in a wheelchair, and she didn’t know if she could safely push him up their sloped driveway to their car.

“We were really stuck,” Sethi says. “I think that was one of the scariest things that we faced.”

Outages and icy roads were even more of a challenge for older Asian American residents.

“Some older folks are dependent on their children, who might not be living in the same neighborhood,” Samira Ghosh says.

Ghosh is the director of special projects at Asian Family Support Services of Austin. Ghosh says older residents may not know how to drive in the U.S., or may not have been able to stock up on groceries before the storm.

This was the case for Minaxi Soni. Soni lives off of Parmer Lane and did not have time to get groceries before the winter storm arrived. Luckily, the South Asian’s International Volunteer Association, or SAIVA, provided her with food.

“I don’t have anything in my home, no milk, no food, and after one week SAIVA people called me and said, ‘Auntie you need something to eat,” Soni says.

SAIVA members and other volunteers also worked to translate critical information from the city regarding the storm. More than 50 languages are spoken among Asian Americans in Central Texas, making it crucial to provide translations for common resources. A report done by the Asian American Quality of Life Advisory Commission revealed senior citizens are one of the groups in highest need for language services to assist with daily living, a need that is heightened during a crisis.

“When you’re sending texts out saying that your power is out ... and it’s not translated into languages that people can understand, it doesn't really help them,” Sethi says.

For some, these efforts would not be enough. Residents reported an elderly neighbor of Chinese descent who died during the storm. Ashley Zhang lives in the area, and while she didn’t know what exactly caused the man’s death, she wondered if it could have been avoided.

“Could this death have been prevented? We don’t know,” Zhang says. “But one thing we can be sure is the man could have died in a much [more] comfortable situation, not at a freezing home.”

While the power outages have been a consistent problem in the past, some residents like Xie are concerned about what may happen in the future.

“I think due to global warming you know this kind of extreme weather could happen more and more frequently, so I’m hoping this particular incident is going to really motivate all of us to do something about it,” Xie says.

Lawmakers and energy providers are currently focused on the issue. The Texas Legislature is considering several bills that would require power plants to be weatherized for extreme weather events, which experts say is likely. The National Oceanic and Atmospheric Administration is predicting 2021 could be one of the 10 hottest years on record, meaning more stress on the already taxed grid as Texans kick on their air conditioning. 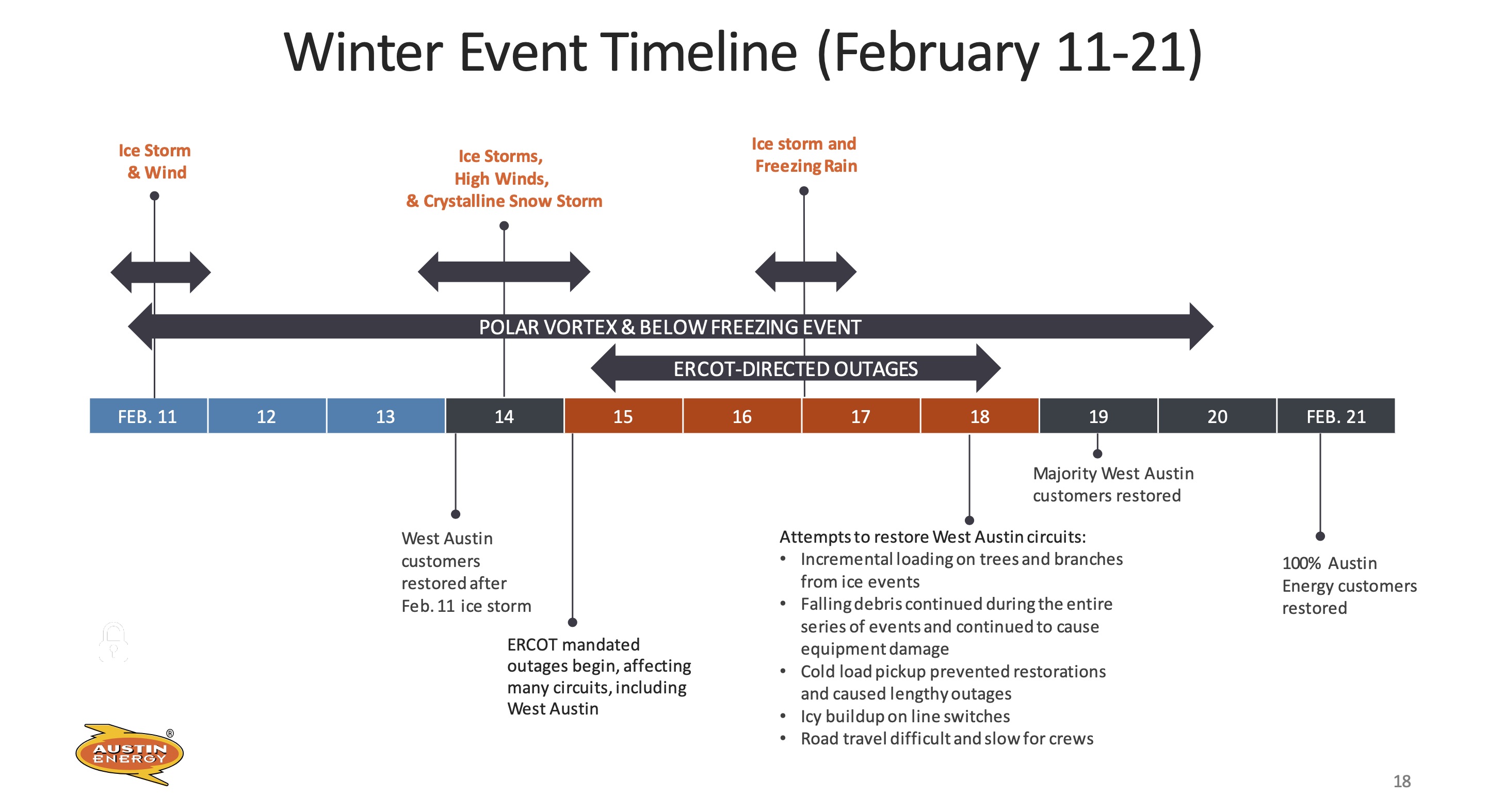 A slide from a presentation given by Austin Energy shows Great Hills residents lost power four days before the Electric Reliability Council of Texas mandated outages that impacted much of the state.

Extreme weather events aside, Austin Energy is optimistic they can remedy outages caused by vegetation. In January, the Austin City Council approved increasing the number of tree trimming crews from 26 to 58 and increasing how far trees can be cut back from the lines.

“This additional staff will ensure Austin Energy is also able to better address the tree trimming needs of our service territory,” Austin Energy said in a statement.

But with more than 2,400 miles of power lines to clear across the city, it will take a while to address the issues in one neighborhood. In a presentation to Great Hills residents, Austin Energy said it would take roughly six years to cut back vegetation.

“One guy on the call, he just asked, ‘Well should I just move?’” Sethi says.

In the meantime, residents in Northwest Austin continue to rely on each other for updates on outages and assistance when the lights go out. On a balmy spring day, months after the winter storm dissipated, Sethi finds a post on a Great Hills Facebook group.

“Power has gone off at least twice today. Has anyone called to find out what’s going on?” 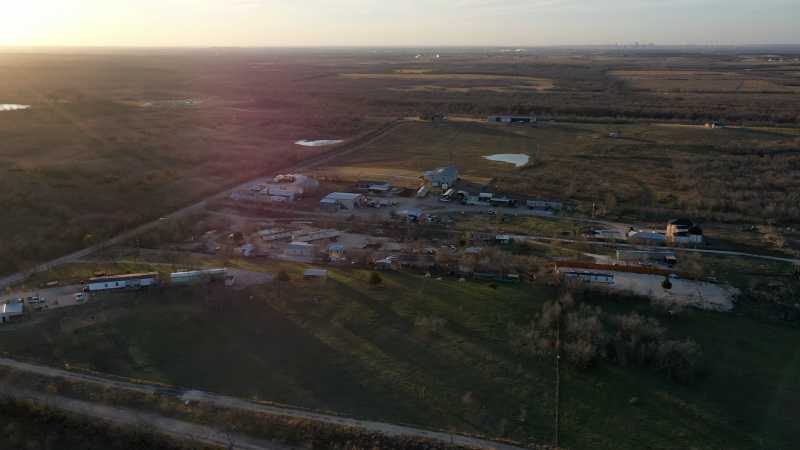 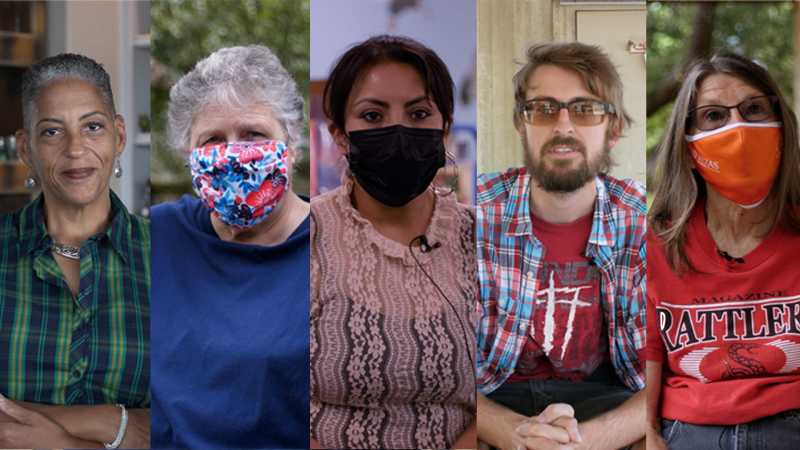 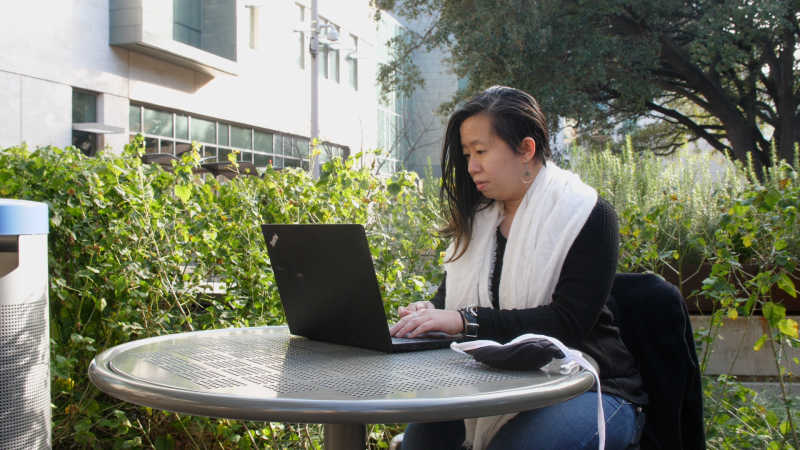